When two tribes go to war – and punters don’t care... 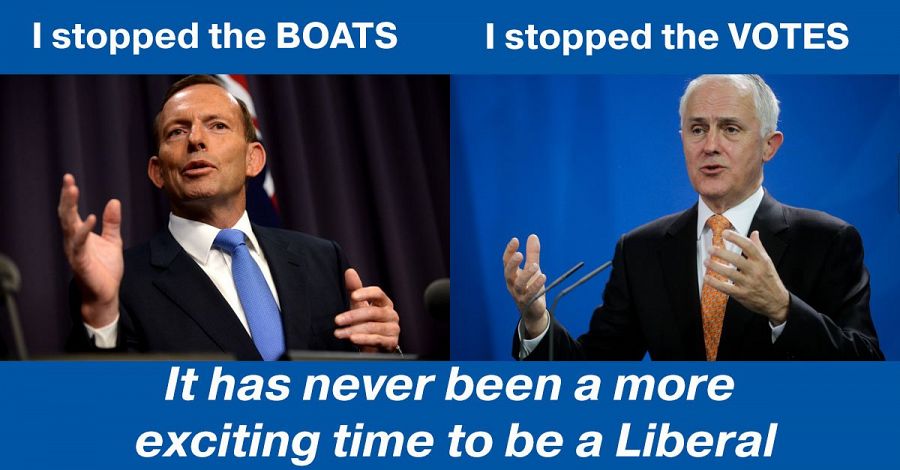 I’ll admit it, I’ve loved watching all the recriminations from both pollies and media pundits as to WTF! Happened with this election. Hell, I even watched Bolt last night just for the jollies of seeing Conservative mouth-pieces twist in the wind LOL!

In all seriousness though, I have been disappointed that yet again, both Politicians and Media pundits are not learning any lessons from the past few elections. Each one in recent years has had a larger “Other” vote. I don’t know about city areas, but I do know why in my regional area.

So many times I have seen all the talking heads say “People don’t like seeing Leaders change, it leads to uncertainty and they feel the new leader is illegitimate as they didn’t vote for them”, or something along those lines.

In my backyard I can tell you now, except for the rusted on’s – in both major parties – the punters really don’t give a rats who the leader is. Financial Markets & Big Business may care, but punters don’t. What punters do care about is the fact that they see politicians and media focussing more on political ‘Game of Thrones’ than actually giving a damn about the issues they have in their own backyard. Months and months have been wasted in Government in recent years over leadership rumbles, manoeuvres then ‘knifing/stabbing in back’ etc of new leader, then the game starts all over again. In the meantime, Joe Blow & Jill Dill are worried about keeping their jobs, or dirty about having that one extra job while the kid is in school that doesn’t even pay the childcare costs of the younger kid. They don’t actually care who is Leader, they just want the pollies to get off their arses and do something that will help make Joe & Jill’s life a tad easier and the future less scary. Pretty much, out in the regions if you are not a ‘rusted-on’, the attitude is:

“They are all a pack of bastards down there in Canberra who don’t give a shit about us until it is time to vote again”.

Sadly, that sentiment is worse in safe seats like mine as there is a sort of fateful attitude of, “Well the Nationals bloke will get in anyhow, all the old rusted-on’s will vote for them and even if someone else decent puts their hand up, the local paper, Chamber of Commerce etc. won’t back them so why bother...”

Attitudes like this is why my neighbouring electorate ended up with Clive Palmer last time and why Queensland got Pauline Hansen in the Senate this time round. Clive pretty much could not be ignored by local media, and gave an electorate that had never had any attention paid to it, some real excitement for a change. With Pauline, like Clive, she had a media profile which meant she got the attention, but she also went to the small meetings, she talked to people and most importantly, she was not one of the major parties.

To say a vote for Pauline was a ‘racist’ vote is just lazy. Yes, I’m sure there are many who voted for her because they are raging racists, even that is sort of lame though.  Many are not so much racist, just really scared of their future so take the easy option of "blame a group that seems foreign to me" as that is easier than looking at the future themselves.

Fun Fact: Many regions who voted One Nation big time wouldn’t’ know a Muslim if they fell over one.

Another Fun Fact: Most of the areas in Queensland that had high One Nation votes have limited immigrant demographics, few asylum seekers and seriously, next to no Asians, so why they are scared of the ‘foreigners’ taking their jobs and ‘changing their way of life’ does not even make sense. Therefore, we need to look more closely as to why that battle cry resonates with them?

There are also many (hell I know of a heap) who voted for Pauline just for the shits & giggles. One I know of said:

“Hell yeah I voted for Pauline. Lobbing that grenade into Canberra will serve the entitled bastards right.”

I tweeted yesterday about the sneering derision many in the media seemed to have about Pauline and copped a bit for it. So I will explain further...

For starters, I am NOT a One Nation or Pauline Hanson supporter, in fact, I put her 2nd last on my Senate form (last had already been set aside for old mate Bernie of the ALA). I am a fan of Democracy though and fact is, she got voted into the Senate, fair and square, therefore deserves to be reported without the sneering. Punters like myself, we can sneer to our hearts content, but media should be more professional.

My other issue in regard to the sneering derision is that it plays into her hands.

EVERY. SINGLE. TIME. Pauline is mocked in the media her legend is cemented further with her supporters.

By this I mean, she tells people that the Sydney spivs and elite in Canberra look down on “us”, they don’t take “us” seriously, none of them care about “us” and “our” worries or concerns.  *slow clap* media who do this, well done, you confirm Pauline’s mantra for her.

For those who have not totally signed up to Pauline’s cult, they are more inclined to back her, as pretty much, she is more like them. She is not intellectual, (which in Queensland regional areas has always been a bit suspect – Thanks Joh!) she is not eloquent, she is not sophisticated, she is the under-dog, therefore, they relate to that, so when Politicians and Media pundits mock or sneer at her, they feel sneered at themselves. So once again, well done, you got Pauline more fans.

The big two parties and media as well, need to stop looking at themselves from the insider bubble and maybe get out a bit more. One Nation supporters are not punters that just suddenly wake up one day thinking, “Woohoo let’s go join a racist conservative party”?

We all need to look at the reasons WHY Pauline Hanson and many other minor parties and Independents can be so attractive to so many?

I know for my area there was a massive One Nation vote. Wide Bay has been a super safe National seat forever, even with Truss retiring, everyone knew the LNP replacement would still get voted in, BUT the One Nation candidate still got 14.94% of the vote here, in a lower house seat for Dogs sake. In an area that has a regular youth exodus after senior (due to high youth unemployment and lack of easy access to Tertiary education) who are replaced by retirees from down south, it will most likely always be rusted on LNP, but, even an area as safe as this fell under the spell of Pauline’s “those big two party people don’t care about you, but I’m listening”...

I don’t know whether it is social media which has changed expectations but they have. The major parties keep getting a lower primary vote, every single election, yet they are ignoring this, or writing it off as ‘leadership issues’. I don’t agree with that. In my opinion it is because too many punters think that politicians are more interested in themselves and feathering their own nests than actually caring about those they are supposed to represent. Back in the day, punters did not care so much about that, they sort of expected to be ignored until election time. Maybe this is where social media comes in. Having a say on social media is a lot easier than getting out a pen and paper to write a letter to the editor of the local rag, who may or may not print it, therefore they never bothered, but whacking out a comment on facebook is quick and easy.

Maybe Joe Blow and Jill Dill are getting used to thinking their ‘opinion’ matters and expect that maybe, just maybe, their local representative should ‘care’ about their worries and concerns? I mean, gee, Pauline is not listening to Sydney or Melbourne HQ, she is listening to "us"... SIGH!

Media and Political Parties never learned their lessons from Cathy McGowan’s success in Indi last election. They didn't look closely enough at why there was such an 'other' vote last election - and don't say just 'leadership' changes, it has happened in State Elections as well. If they don’t learn it this time, pretty sure the next election will have an even bigger ‘other’ vote with even more surprises coming out of the woodwork? Let’s just hope we are not getting the same “OMG! Who could have expected this result” from our political pundits next time round? Sadly, I’m no expert, but I expected it :(

Cheers,
Noely
PS. It really is an exciting time to be an Australian ;-)

This piece "Pauline Hanson takes centre stage again but this time we should listen not lampoon" by Margo Kingston is a good read with solid knowledge of Pauline and should give many food for thought...