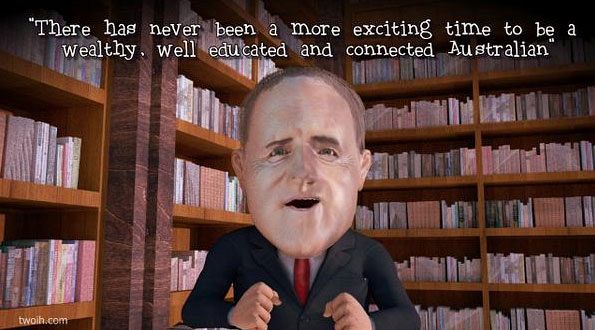 Rob @TwoEyeHead obviously saw the same irony I did :(

Whole forests have been felled in regard to press gallery reporting of the shuffle, though I have to say I am really disappointed. I know it was only finalised yesterday afternoon, but even many journalists I really like have neither answered nor asked a lot of the questions I have in regard to our shiny new future under PM Turnbull and his ‘21st Century Cabinet’.

It is kind of ironic that Politicians always whine about gossip – that is not flattering to them – as just “Canberra Insider rubbish”. Normally they are incorrect, we do need to know what sort of people these MP’s who are supposed to representing us. They don’t ask us every time they vote on an issue, so we really do need to get at least the vibe of the person to have some sort of confidence in them. Yet, the odd thing is, with this reshuffle all we have been told really is ‘insider gossip’?

I have questions about this new Prime Minister and his Ministry and they are not being answered. You know... The REALITY of these changes.

OK we all know that due to the insidious party political system, the people who should get good jobs often don’t, so many Ministers per state, per faction, per Liberals, per Nationals etc. Pretty much a full on quota system, except of course for the laydeez, they have to be on merit UGH! But even here there are some really odd choices. Don’t get me wrong, I’m happy to see the back of Abbott & co, though there could have been a few more that went with them...

Giving water to the Nationals?  Remember that saying, something about a fox in the henhouse... Enuff said. :(

Actually the Bruce Billson / Kelly O’Dwyer reporting is a good example of the Insider gossip vs Real information that punters need to know. Billson being an advocated for Small Business is obviously a lot less interesting than “Billson gives Malcolm the shits” and I’m sure that Ms O’Dwyer is a competent woman, we are always being told she is a “Liberal rising star” – bit like the “Outstanding Candidate Hastie” ARGH! Kill me now... – and she may actually be as she seems to have risen rather quickly, BUT what does she know about Small Business that makes her better for this role than Bruce Billson?

Am I the only person who sees the irony of the new ‘no slogan’ Prime Minister flogging “future”, “21st Century cabinet”, “innovative”, hell, every trendy modern phrase he can use to infer that we are going places, YET, this is the man who has pretty much singlehandedly decimated the vehicle that would have allowed ALL Australians to advance into the future and be productive, the NBN? The ALP really stuffed around and got off track but did not actually try to demolish a piece of infrastructure that would have allowed Australians to be part of Mr Turnbull’s innovative future?  I know most Journalists run squealing from anything IT related but cmon, surely even the most IT averse can see the irony here?

We have an election within 12 months and I hate to actually agree with any politicians, but we really do need to know the ‘reality’ of the policies from both parties. Don’t get me wrong, a bit of fun with pollie stuff-ups is always enjoyable, intrigue is not bad either, BUT can we also have some ‘real’ information from them, not just a political d*ck measuring contests, but how policies actually will affect punters in ‘reality’?

PS. If we have to gossip... With Andrews publicly going rogue in his surreal press conference yesterday and Bernardi being feral, egged on by far right mates like Bolt, wonder what the odds are of a "Christians United" or "Australian Conservatives" party being formed as a break away from the Liberals? Now that would be fun to watch? ;-)