In recent years both in Queensland and Nationally Unions have become the bogey man, particularly in the media and it is something that has always fascinated me. I mean, yes they have an input into the ALP, though for mine, it is less of an influence than the likes of Big Business dictating to the LNP, yet for some reason, that is considered acceptable?  Not quite sure why, as yes, there have been displays of Unions ripping off members, always displayed as a heinous crime, yet the Financial Institutions & similar who have backed the LNP don’t seem to be tainted with same brush, nor screeches for Royal Commissions? Considering the lives destroyed by similar Business transgressions, I think that is pretty much a fail - politically and morally?

In Queensland both these groups have been fundamental politically, more so than usual. You are all thinking, “of course Unions & Big Business play major roles in the big two political parties” and you are right, though in Queensland in the last two years, this dynamic has been on steroids.

I will remind you again:

Queensland has no upper house, so the ability of a third party to whisper in the ear of Government and influence policy is more effective in this state than any other in the nation.

Rise of the Unions

The Queensland LNP government came into power with a plan and were very quick to start ticking that off. Pretty much first cab off the rank was ensuring that Unions could not fight back effectively once the sackings began. New legislation - that has since been quietly cut back after court challenges - ranged from forcing Unions to have a ballot of members to spend more than $10,000 for a political purpose, to not allowing a public servant to have a union coffee mug on their desk. Yes, they were not just designed to stop Unions waging campaigns against the Government, some legislation changers were just plain petty. 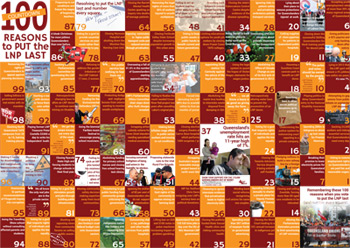 Considering the sheer number of sackings the Government planned - though note they assured public servants they were safe whilst campaigning for Government - this was a pretty smart move to shut the Unions down so they couldn’t kick up too much of a stink. Depending on who’s figures you believe, 14,000 to over 20,000 Nurses, Government Staff, Teachers etc have been sacked or made redundant, whatever is the correct term, that is an absolute shipload of people?

As mentioned in a previous post in this series, the ALP  - who would have traditionally screamed to high heaven - were decimated at the election, they did not have the voice to fight these sackings as effectively as they should have. Having said that, the Government actually over played their hand by stomping on the Unions so much that it actually galvanised them, we ended up with creation of Union bodies such as Together Union,  Working For Queenslanders & Stand for Queensland becoming almost a defacto Official Political Opposition to the Government.

The proposed Asset Sales, now re-badged as Leases, just pulled even more Unions into the fray as opposition and I have to say, as a punter, they were needed in a one paper state which really only disseminated what the Government was saying, as information opposing the press releases had to come from somewhere.

Regardless of how you feel about Unions, pro or con, the fact is, in the past few years in Queensland they have well and truly done their job to the best of their ability, they have defended and represented the interests of their members to the hilt which is of course what they are supposed to do.

Traditionally, as we all know, big business has always backed the Conservative parties. One of the first acts of the LNP Government was their so-called Independent Audit to have a ‘plan’ to get Queensland financially back in the black and who are you going to call? Why Peter Costello of course. The fact that clients of Mr Costello’s own consulting company were potentially beneficiaries of many of these sales, surprise surprise, was not considered relevant or a conflict of interest when looked at after the fact by the CMC, now CCC (another post for another day). 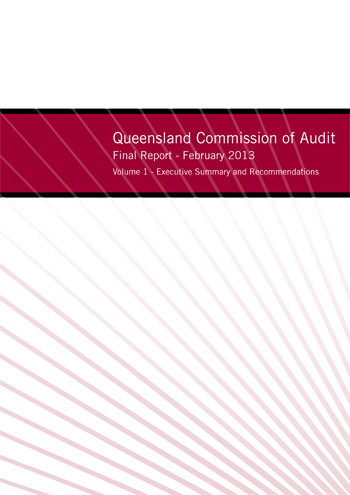 Queensland’s phenomenal debt had to be fixed, as to the true amount of that debt, well that is another case of we don’t know who is right or wrong as accurate information is hard to come by in Queensland (again, another post for another day), but like most of these audits, the final product pretty much came to the conclusion the Government paid them to produce - Asset Sales & Privatisation being the answer.

From recruitment companies getting contracts for admin staff in Hospitals to IT services, any Government function that could be easily outsourced or privatised has been. I would suggest that many who get these contracts are LNP donors, though that would be hard to do considering the sheer financial wizardry that has been employed and the raising of non disclosure amounts from the publicly accountable $1,000 to the horrendously unaccountable $12,400.

Considering how the ALP basically lost the election with planned Asset Sales being a step too far for the public to cop, the LNP took the Costello proposals a step further with their Strong Choices (a very big post for another day) to the public with a website & survey, pretty much a charm offensive designed to include Queenslanders in the decision to sell off Assets to bring down State debt. Even though it didn’t get a lot of media attention, the results of the survey (the campaign cost a fortune) came back overwhelmingly that people would prefer taxes to be raised than assets sold. This put a kink in the plans and again, I will state, it is NEVER mentioned, so the whole strategy has now been re-branded as Asset Leasing with even more money spent on making that sound more palatable to the public.

Of course privatisation and Asset Sales / Leasing is not the only aspect of the Queensland Government where big business have a finger in the pie. There are too many to mention though a few examples are:

Personnel from business have also been added to key Government positions, one of the more controversial is the likes of an ex Queensland Resources Council (key Mining Lobby / advocate group) employee getting a high profile gig as an Environmental advisor - yes you read that right, talk about letting the Vampire run the blood bank? – to the Premier. Again, this is an area where there are too many to be named, though to be fair, it may not normally be this blatant but it is not unusual for Governments of all flavours to do. Installing mates in key Government positions is a time honoured tradition.

Little Balance in the current state of play in Queensland

Don’t get me wrong, I am not anti business, nor am I pro union. Both should be at the table when it comes to well-rounded input and considerations when developing Government policy. In Queensland there is not even a pretence of balanced consultation. To mangle Animal Farm:

The Unions have come out fighting, they started early and they are going hard, in fact, I would anticipate that we will see more Union advertising on our TV’s over the next few weeks in Queensland than actual ALP advertising.

Big business is less obvious, they have had their $1000 dollar a seat dinners, paid their $12K donations and will leave it in the hands of the Government to fight for them under the guise of JOBS - needs to be in capitals, as is the next favourite buzz word from the QLD LNP after “strong” - and “economic certainty”.

Cheers,
Noely
Note: Yes, no links to references in the above. I know this is out of character for me though it would have resulted in this 2nd instalment being of thesis proportions, when I am really only trying to give an over-all ‘guide’ to what is impacting Queensland politics & this election. It is very easy to google specific mentions above and I am sure regular readers will supply links and further examples of both Big Business & Union influence in Queensland in the comments below :)