The Cult of Malcolm makes Apple fanboys look like amateurs 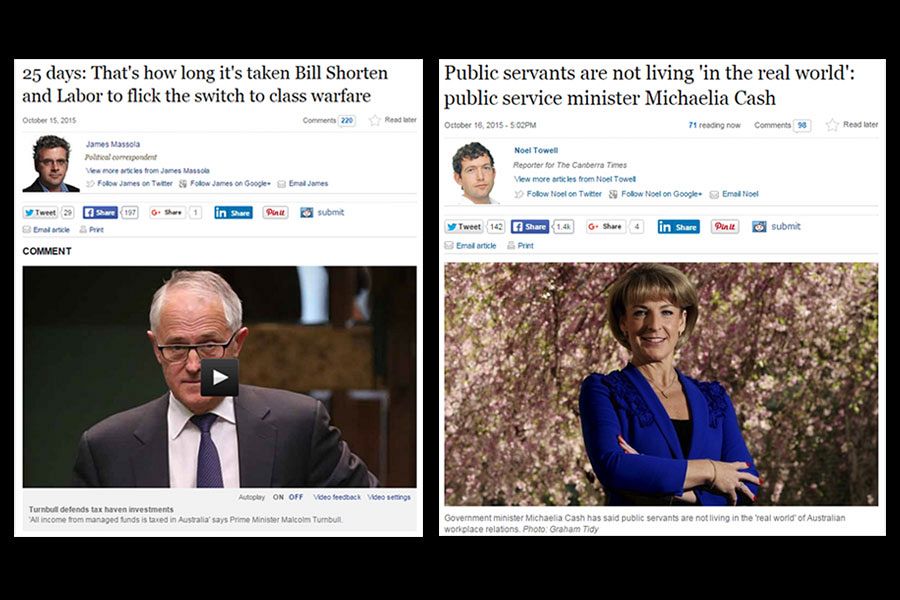 Two different versions of our "Real World" from the same media outlet...

If I have to see one more Press Gallery piece along the lines of ‘poor PM Turnbull besmirched by grubby Labor just because he is rich’ I swear I will scream. The phrases “Politics of envy” and “Class Warfare” have been so over-used in recent days and for the life of me I can’t understand why?

Bitching about Turnbull living in a mansion is politics of envy. Raising the issue of your Prime Minister – the man who ultimately decides on who will be taxed in this nation and how much tax they will pay – CHOOSING to invest in an offshore Tax Haven like the Caymans is not even close to politics of envy. Shame punters are not aware of just how inappropriate this action by our Prime Minister is due to the current Press Gallery love fest with Mr Turnbull.

Look, I can understand the relief of the Press Gallery dealing with the likes of Malcolm Turnbull instead of the daily WTF! announcements endured under PM Abbott, but... the thrall they seem to held under with their shiny new PM is getting so embarrassing, the line, ‘get a room’ comes to mind.

As it seems most journalists in the Press Gallery have forgotten, I will remind them that it was just over 12 months ago at the Brisbane G20 the participants, including Australia, said they would “crack down on International Tax Havens”. We also had a ‘Budget Emergency’ back in the day too? Considering our current budget deficit, instead of lauding Mr Turnbull for admitting he is rich (yes they did, go figure!), they should be connecting the dots. Perhaps questioning, if due to these ‘tax haven’ choices, could we actually trust Mr Turnbull to crack down on them, making them pay their taxes so ours did not have to be raised to pick up that burden, as we were promised only 12 short months ago?

So yeah, obviously as a punter I have total faith that the bloke who chooses to use tax havens is going to crack down on tax havens? Oh wait...

I won’t even go into detail on the rubbish ‘class warfare’ BS as that is some seriously bizarre reverse psychology going on there. I would have thought that fixing our ‘Budget Emergency’ with the likes of reversing legislation for Financial Services, scrapping the Mining Tax, NO transparency for Big Corporates etc. VS  A GP Tax, paying more for Tertiary Education, raising the GST etc. means that the Class Warfare boat has already sailed and pretty sure it is actually the Government who is the aggressor?

Not all journalists seem to be star struck by our shiny new PM, thankfully a few are still actually interested in the ‘reality’ of what he and his Government are doing. How the majority missed the utter irony of Michaelia Cash castigating Public Servants for not living “in the real world” – for expecting a pay rise without a productivity offset – on the very same day that Mr Turnbull in the neighbouring house is ticking off the ALP for being so grubby as to question his Tax Haven investments is beyond me. Yep, “Real Word” is strong with this Government SIGH!

Maybe it is time for our politicians to actually remember that they themselves are Public Servants? Maybe a few journalists could apply this Cash statement to the politicians themselves and see what answer they get?

OK, I am one of those people in the “real world” who has risked own money, quality of life, family time etc etc to run a business and I can tell you now, the fact that this Government (and to be fair, previous governments) give so many concessions to massive multi-nationals and just this week allowed in Legislation for some of the largest companies in this nation to face no scrutiny in regard to their taxes infuriates me. The fact that “One in five large private companies paid no tax last year”, yes, NO tax, whilst myself and hundreds of thousands of others – who I will remind you are actually the biggest employers in this country – had no way out of paying their ATO bill, seriously pisses me off.

What drives me even more insane is talking to punters who only see the nightly news and they are loving Mr Turnbull, totally unaware of how this Government is shafting punters and small business. Our new PM is just such a good bloke. What happened to actually informing the public? When I tell fellow small business owners that he is not such a good bloke, he ‘chooses’ to have investments in tax havens or his Government just protected the 1 in 5 big businesses who don’t pay tax, they think I have the tin foil hat on? For this, I place the blame at the feet of media.

Whilst I’m ranting, the final straw in the Malcolm Turnbull media love affair is the act of total bastardry perpetrated by Immigration Minister Peter Dutton and Prime Minister Turnbull in relation to poor #Abyan, a woman who has been raped, on our watch – in that hell hole of  a detention centre in ‘lawless’, yes lawless, media won’t tell you, but do a search, it is beyond a banana republic now with the Government in utter chaos – in Nauru. To make a miserable life worse, after more caring people agitating for an abortion and coming to Australia, these men secretly fly her back out of the country to escape a court injunction. This poor pregnant refugee has been whisked back to the scene of the crime, without access to a counsellor or medical professionals.

Just for one moment, imagine this was an Australian citizen, raped in a foreign country and treated the same reprehensible manner as our nation is treating Abyan? Even Aussie drug traffickers pinged overseas get more sympathy in our media than this poor woman whose plight should be front page news.

But hey, Prime Minister Turnbull is a great bloke, truly, I know that because the Newspapers and TV told me. You know, after so many glowing pieces about Mr Turnbull, polls say he is a legend too, geez I wonder why? I mean, it can’t have anything to do with the fact that Joe Blow & Jill Dill out in the burbs are only hearing and seeing our wonderful new PM in the most glowing of terms? ARGH!

The love is getting ridiculous and it is to our detriment. Hell, I’m surprised that some Turnbull fanboy has not written a piece telling us naysayers that we should be ashamed of ourselves for questioning our PM’s choices, I mean, this man is giving up squillions of dollars to benefit the nation with his leadership??? #KillMeNow for even thinking that :(

Malcolm Turnbull may be a decent bloke, however likeable he may be, this does not negate the "real world" action of his Government nor his choices as Prime Minister. The actions and decisions deserve our attention, we punters deserve to be informed of them as they actually affect our 'real world', unlike the Kardashian style adoration puff pieces that belong in a womans magazine, not serious news outlets.

Noely
PS. Normally I would link to articles that I refer to as I consider that to be polite and of course more informative for any poor bugger that stumbles across one of my rants. However in this case I have not linked to any of the 'cult of Malcolm' pieces as I refuse to reward them with clickthroughs or up their reader numbers to increase the popularity of these pieces for their writers, nor to profit their advertisers. Just look at the Federal Government areas on most news sites and you will see them for yourself, if you wish to :)
17 Oct 2015: John Passant is a former assistant commissioner in charge of international tax reform in the Australian Tax Office and he has piece in the Canberra Times "The PM is no ordinary taxpayer, which is why clarification is needed" which unlike others in regard to this Cayman business actually has some good information on this issue.