So yesterday I watched the press conference Malcolm Turnbull had with Michaelia Cash to flog the latest ‘coup’ of the AHA (Australian Hotels Association) agreeing to take on 10,000 PaTH Interns over the next 4 years.

So yesterday I watched the press conference Malcolm Turnbull had with Michaelia Cash to flog the latest ‘coup’ of the AHA (Australian Hotels Association) agreeing to take on 10,000 PaTH Interns over the next 4 years.

Yep, 10,000 young unemployed people between the ages of 15 and 24 can get the opportunity to work in a pub for 12 weeks to gain work experience. Unless a lot has changed since I was a young adult, it didn’t take 12 weeks to learn how to pour a beer, but anyhow, putting that aside, there are a lot of questions that need to be asked about this so-called deal that required a press conference featuring the Prime Minister no less to announce?

For those unaware of the PaTH Internship program:

Sweet gig for the business huh? A FREE employer for 12 weeks, fully funded by the taxpayer.

In the case of AHA we are talking about a sweet $10,000,000 taxpayer funded incentive on top of the free labour?

Now, the only obligation an employer has to get this free kid is “a reasonable prospect of employment for the intern following the internship”, so I obviously queried, on twitter, the legitimacy of the AHA honestly having 10,000 jobs over the next 4 years would be available to these kids?

Imagine my surprise when AHA (WA) CEO, Bradley Woods hits me up on Twitter with #FakeNews? 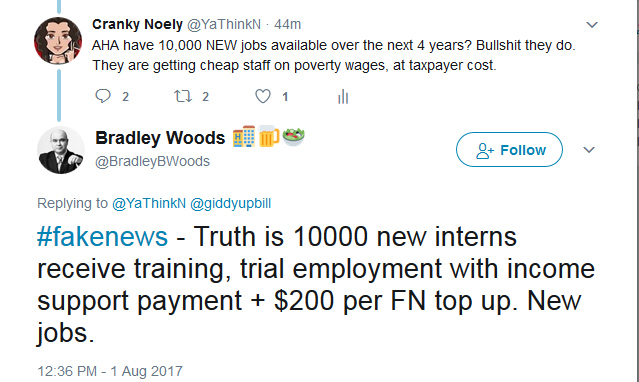 Yep, he seriously started his tweet with #FakeNews? Now, I don’t know about you, but…

Anyhow… I asked him quite a few questions, only to get them ignored in favour of him just dumping the https://jobsearch.gov.au/path/employers/internships link to me. Which of course I already had, this was why I was asking these questions in the first place.

Sadly, due to the Liberals imploding over Marriage Equality, not one Journalist at the press conference asked any serious questions in regard to this AHA PaTH deal? Don’t get me wrong, as much as I enjoy watching the Liberals squirm, it is not helpful when it comes to any scrutiny of this program.

On the 9th of July Terry Sweetman wrote a piece in the Courier Mail, “Opinion: PaTH program does little to provide young Australians with meaningful work” which was very illuminating as we finally got to see some figures as to the ‘success’ of this program?

Even though Michaelia Cash likes to screech, “The best form of welfare is a job” at every bloody opportunity, she is not as forthcoming on exactly how many jobs are resulting from this very expensive, tax payer funded program. I won’t even get into the issue of particular businesses like 7-eleven getting their claws on these kids when they have form for ripping off their employees UGH! Anyhow, to quote Mr Sweetman:

“After some original fudging, Cash’s office conceded that just 82 people had found jobs from 620 internships.”

Obviously we don’t have any idea if those lucky kids actually got a job with the Business they did their internship with, or used the experience to get a job elsewhere? Either way, that is a really crap success rate?

OK, now I’m not the best at maths but considering the above success rate, if we believe AHA aren’t going to flick staff they already have for the free labour – they say they have over 5,000 members across the nation – the taxpayer investment here is staggering.

Now that is just the business incentive payment, remember, these kids are also still getting their welfare payment while they are doing the internship and a small top up of around $4 bucks per hour (figure quibbled over) so they Government can convince people it is not slave labour, and insurance costs paid for by the taxpayer?

Personally, without some more detail this doesn’t sound like a good investment to me at all and I have lots of questions that I think need to be answered which neither the Government nor AHA seemed inclined to answer for me.

Now don’t get me wrong, I really do want kids to be employed, or at the least getting training to try to get a job. I live in an area where we currently have 23.5% Youth unemployment, now that is nearly a quarter of the kids living in Wide Bay?

I’m not sure what the answer is? I know we need more TAFE and we need it to be free for unemployed kids. We do need incentives for Employers to employ kids in entry level jobs. BUT from what I can see with current programs, we, the taxpayer are spending squillions on PaTH and of course all the money going to Job Providers, and all these businesses seem to be the only ones benefitting from this taxpayer investment as youth unemployment keeps rising?

Maybe we should remove the funding of these private providers, get back to a segment of Centrelink looking after it – who would then be answerable to Government (and voters), not at arms length like they are now – and expect some sort of results, be it training or kids actually getting jobs.

At the moment, we seem to get a lot of press conferences, that like to brag about ‘jobs & growth’, yet are not getting any answers as to real results in this youth unemployment area? There appears to be little oversight on this programme (and Job Providers), there seems to be no transparency from the Government in regard to abuses of PaTH programme, full costs, nor accurate reporting of results?

If some intrepid journalist could get my questions answered by the Government, that would be appreciated :)
Cheers,
Noely

PS: We ALL need to start asking more questions of both the Government and Businesses benefiting from PaTH interns.

I'm waiting for your reply. Are you prepared to publish a list of venues who partake in this scheme & the progress of the participants?