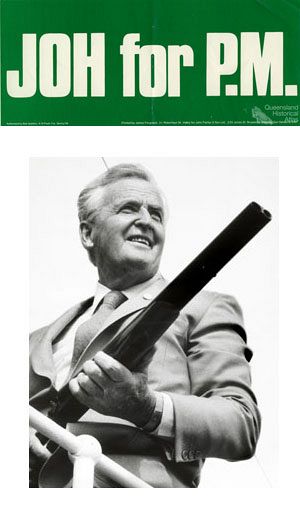 I read an interesting article this morning A letter to my so-called 'progressive' friend by Jamila Rizvi.  The passion the writer shows for the rights we have in this country to vote, not only was a great reminder that we are bloody lucky to have that right, but also brought back memories for me as to why I even like voting (unlike many of my friends).

I grew up in Queensland, so back in the day, Federal politics was not that big a deal here, as we had Joh!  In fact, all of my youth was ruled by Joh Bjelke-Petersen as he became the ‘king’ of Queensland the same year I was born.  I grew up with my ALP Granddad teaching me what a Gerrymander was, lamenting the fact that there was a coalition, actually as a youngster I used to think it was so unfair that the Libs & Nationals could gang up when it suited them to bully the ALP?  I mean, if the Nationals were soooooo good why could they not win on their own?  Then as I got older, we had the SEQEB Strikes (god, those huntsman loved the blackouts, every night walking down the hall to your room with a candle and the huntsman looking 20 time larger lurking there in the dark UGH!), police thumping protestors during street marches, Joh’s mate Russ building an expensive off-ramp to nowhere (which ended up being taking punters to his pub), gee I could reminisce for hours...

Joh was a massive influence in Queensland and in our lives back in those days.  I might have been a bit luckier having grandparents living with us that were actually interested in politics so I did learn a lot, but what probably stuck with me the most, was the dream that one day I would grow up and the very first time I could vote I would make sure I put Joh last on the ballot ticket.  Until of course grandad let me know that I was not actually voting for Joh (that took a while for me to work out), that I would have to put his ‘party’ last on the ticket LOL!

Ironically for me, the very first time I could vote in a state election was the year that Joh got voted out.  A heap of people were actually having parties and BBQ’s that election year as the feeling was that this would be the year that he would go (too many things were starting to catch up with Joh), and of course I went to my bosses BBQ where we partied hard as the results came in.  This though, gave me a false impression of voting.  I had been so proud in what I thought was my ‘say’ and felt that with that one vote I had helped change the state of Queensland and it was seriously important.  Not only did I take my vote seriously, I went the extra yard and had my notes for the bloody big senate paper just so I could put Flo last (can't forget her bid for the Senate...).

In fact, I was just part of history.  Obviously I am a lot older and jaded now, (though still enjoy voting) and realise that I was just lucky enough to have a good education in regard to our political system and be an interested teenager at a time that to this day, will go down in Queensland history as well “interesting” to say the least.  I was also lucky enough to go to a Catholic School where Civics was compulsory so we did actually learn our political system.  Something that I now know all these years later is not always taught in state schools, in fact, now having a daughter of my own, I KNOW that no meaningful Government is taught at all in State High schools here, which is disgusting really, considering it is our legal obligation to vote, yet there is no legal requirement on the Government to educate us as to what we are voting on?

I may be older, though not much wiser.  I now no longer see Joh Bjelke-Petersen as the devil incarnate, I do actually appreciate that he did have a true passion for Queensland, (and would love to know how he would have "fed the chooks" in this day & age of twitter & facebook LOL) though, believe the sentiment that being in power too long corrupts is true.  I still think it is unfair for the Nationals & Libs to gang up together LOL!  I still despise corruption in Politics.  BUT, I still make sure I actually number every box in the Senate paper (love how you can now go online & do it and get your cheatsheet to print out & take into the booth with you, wonder if someone could build an app for that?)  AND I still do love to vote, so for that, and it hurts to admit it, or say it, “I have to thank you Joh”!

And thank you Jamila Rizvi for the kick in the khyber reminding us 'why' voting is something not to be taken for granted :)