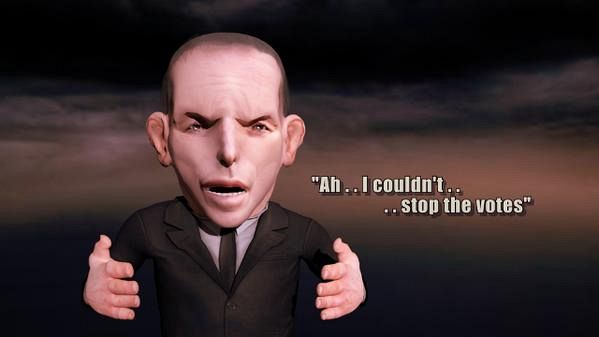 Well maybe not squat. We do have the bonus of hearing less bogan slogans and ridiculous “I stopped the boats” answers to serious economic questions. If Malcolm’s words are to be believed with no more “slogans”, we may even see the back of copious “Death Cults” in interviews and a little less use of the inane “evil”.

Well maybe not squat. We do have the bonus of hearing less bogan slogans and ridiculous “I stopped the boats” answers to serious economic questions. If Malcolm’s words are to be believed with no more “slogans”, we may even see the back of copious “Death Cults” in interviews and a little less use of the inane “evil”.

Don’t get me wrong, I’m happy to see the back of Tony Abbott and don’t let his arse smack the door on the way out.

The other bonus is that we may actually get a Minister for Women? Though having said that, the potential names tossed around in media are not heartening as they all follow the bullshit “merit” Liberal party line so unless one of them suddenly backflips, best get back to your ironing ladies...

We also could get a Minister for Science, but again, this won’t bring back all the scientists we have lost nor will it suddenly give CSIRO a decent operating budget. In fact, the free market king is likely to outsource even more of our scientific and health taxpayer funds to his big business donors to keep them sweet.

Speaking of the science...

The biggest indicator that after all the fun and games of playing #LibSpill2, the result is really just a better dressed, more urbane and articulate face of the “Conservative” Party, yes, Conservative, not Liberal. Malcolm Turnbull personally may be a Liberal, but 40 of the Conservative nutters voted against him. He knows he has to keep them sweet and before they even had a vote he let them know it too with his office advising:

“If chosen as leader, his office said he would stick with the Coalition's current carbon-emissions targets and put the issue of same-sex marriage to a plebiscite”

So nothing really changes.

Turnbull has probably around 10 months until he goes to an election. He watched Rudd and his supporters white-ant Gillard from the back benches. He is not a stupid man, he will try to keep those 40 ‘conservatives’ happy for at least the next 10 months while he probably just ‘hints’ at moving the party in a more Liberal direction, as let’s face it, you only had to watch Sky last night to see that die-hard Liberals and the power-brokers of the party hating his guts but are all so desperate to stay in power that they will back a monkey (as evident with the mad monk) if it keeps them in their jobs.

The biggest problem for Mr Turnbull is going to be all those swinging voters who really like him. Though maybe if media – besides niche IT – actually reported the horrendous wastage of money and decimation of the NBN under his direction they may not be such big fans? When they find out he won’t suddenly be the saviour of the Environment, Marriage Equality or the Republic, they will be even unhappier.

As regular readers know, I could not stand Tony Abbott, but at least some of the bullshit brain farts he came up with like Sir bloody Prince Phillip, he did actually believe in. Malcolm Turnbull is a whole new type of political animal. As we can see from the NBN debacle (read this & weep) with it’s far-reaching ramifications for us as a nation post manufacturing employment, Malcolm Turnbull is a man who appears to ‘knowingly’ do what is politically expedient for his career at the expense of the future of the nation. Think about that for a moment...

There will be a lot of “I told you so” coming from many of us in the next few months as the shoulders of the Malcolm Turnbull fans sadly slump realising their expectations of a more liberal government are not to be.

Oh and while I’m on #Libspill2 I have seen quite a few tweets as to why are so many women on twitter being vicious about Julie Bishop and why do women act like this?  Well, not sure about others, but for mine, it is because we do actually see Ms Bishop for what she is. This has nothing to do with feminism or supporting women, this is about the Machiavellian manoeuvrings of a Deputy Prime Minister who seems to be swerving the normal calls of “back stabbing” or “blood on hands” that others have received in the past from the media. Instead, she seems to be getting the “poor Julie Bishop, tough time for you...” empathy (as opposed to actually questioning) from the media? Really?

In fact, I would say that Ms Bishop is probably benefitting from many in the media realising how vicious the attitude was to women in the last Parliament and are in fact giving her a sweet ride now due to that.

IF the Deputy had been a male MP who had always declared support for the PM who then goes and taps him on the should to say, “mate, you are on your way out...” pretty bloody sure media would be screeching disloyalty, who has he been talking who, when did he know he had the numbers, at what point did he jump ship, blah blah... Instead with Bishop we are getting “class”, “dignity”, “grace” etc... Sweet Jebus give me a break.

Anyhow... now that is out of my system. Let the games begin. Only 10 months remember? 10 months of feral Liberals seething but smiling to cameras with “broad church” comments. Some, at some stage, will have to break under the ire of Jones, Hadley, Bolt et al and then the fun will truly start ;-)

cheers,
Noely
PS. Don’t think Bill will be sleeping real well at the moment either, though will leave that blog for another day, maybe after the first polls come out in a few weeks and we see the difference in numbers with Bill being compared to Mal instead of Tones makes out there in punterland? Yes, fun times ahead indeed...