Queensland grew up on the weekend, but racists gotta racist ☹ 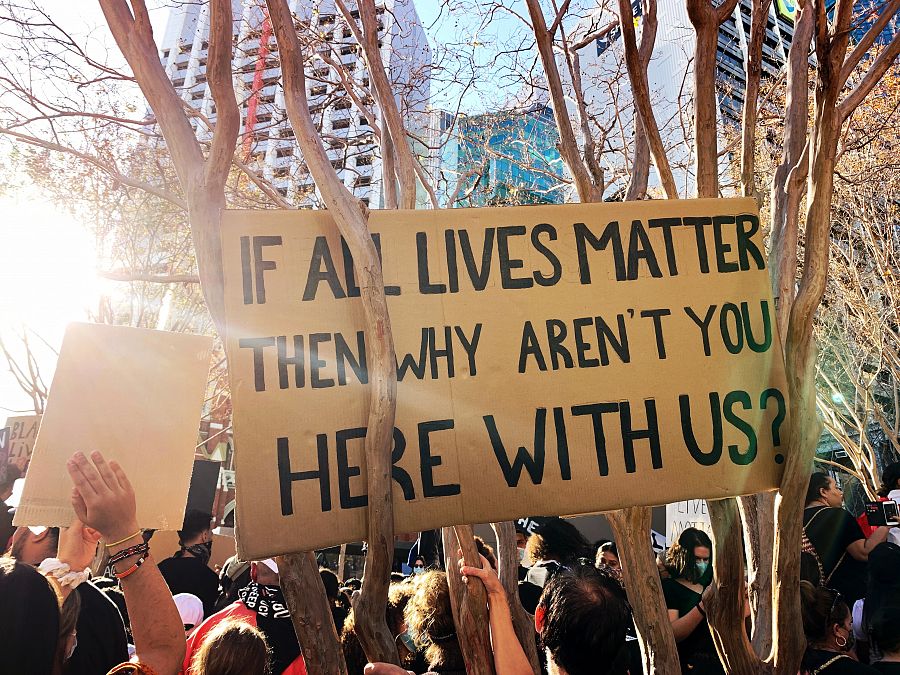 If you are of a certain age, let’s say over 50 and grew up in Queensland, you grew up under the Joh Bjelke-Petersen era and if you don’t know what those years were like, you just can’t appreciate what we saw on the weekend with the #BlackLivesMatter protests.

Not just in Brisbane, but also in Townsville, hell, during the week we also had one on the Sunshine Coast, yep Sunshine Coast, with hundreds turning up in a rusted on blue ribbon conservative area. ALL were peaceful, all had great turnouts, in Brisbane some were saying had not seen numbers like that since the Iraq War protests.

Now this matters. Some were even suggesting there were 30,000 marching in Brisbane! Not a bad way to celebrate Queensland Day, yes, that is an actual thing 😉

Considering it was mostly a younger crowd, as many who would normally turn up at this sort of protest just couldn’t due to COVID-19, elderly, at risk health conditions etc., how many ‘would’ have been there had this not been the case? That thought alone is staggering.

This happened in one of the most racist states in this nation.

Did you see these history making headlines on the telly?

Did you see this astonishing support proudly splashed all over the state paper of record, the Courier Mail?

We now cross live to the wrong side of history. https://t.co/jejBeQ9j3I

Queensland has always been racist. It is a fact. We were the last state (in 1965) to remove restrictions on Indigenous voting. We are the home of the 2004 Palm Island death in custody shame and the ensuring civil disturbances that resulted. Queensland has more than its fair share of Aboriginal deaths in custody, and of course like every other state in Australia health and education outcomes for Aboriginals and Torres Strait Islanders is lower than non-Indigenous Australians.

The vibe is always that it is not the Police or Governments fault, it is somehow Indigenous fault? Hell! As recently as last month, yeah… last month media were reporting on the Palm Island riot compensation being spent on “luxury boats, sports cars, and motorbikes”.

OMG! How dare people spend their well-deserved compensation money on whatever the hell they would like?

Ch 9 ran a report last week on compensation paid to Palm Island people following 2004 death in custody and riots. It was the most racist, disgusting and wrong report I have ever seen. I know. I was there. The claimants deserved the compensation. Ch 9 should be ashamed. #auspol

I cannot imagine any other sector of ‘white Australia’ receiving a compensation payout and then having media sift through what they spent that money on to check they were not spending “recklessly”. Australian media just have to view anything to do with First Nations people through the prism of racism, they just can’t help themselves.

Worse, the racism is not even honest. It is couched in terms of ‘caring they might be wasting money’. Which is utter shite. If the same media were reporting on a massive payout to say white victims of medical malpractice you would be getting headlines of “After years of suffering, finally we see smiles” along with of course a cute young blonde girl with her family sitting on their boat all smiling.

The Black Lives Matter protests on the weekend are no exception.

Tens of thousands turning out to say no to racism, in support of Indigenous Australians, IN QUEENSLAND should have been lauded.

With the COVID-19 cloud over us, I actually dreaded this march in Brisbane, I was really worried people would not turn out due to the health concerns. I understood why they were held, there was momentum and it could not be wasted, it was an opportunity to say “hello, look in your own backyard Australia”. With all media looking at what is happening in the US, reporting in a shocked tone, discussing the inequality between white and black America and knowing it is WORSE in Australia, it really was a moment in time that could not be ignored.

Well, that is what it should have been. But no, Government and media had to inflict their racism on these marches too.

I have lost count of the pieces I have seen on the TV and in papers all framed as marches will put us in danger of a second wave of the virus. They don’t include that the very same weekend nearly all states relaxed restrictions, holiday spots were chokkers, people were wall to wall in shopping centres, but nope, this virus is bloody magic, it can only be spread by protesters, not those getting out there ‘helping the economy’, they are praised.

To really rub salt into the racist wound, of course this, like the Palm Island class action compensation, it is cynical and hypocritical, couched as ‘concern’. We are not being racist, just concerned about health. [sarcasm]

Well, I call bullshit. If media and government were that concerned about health they would be concerned about ALL the people out and about on the weekend, not just protesters. They would also be praising protestors for the vast majority wearing masks and organisers being so prepared with health considerations.

Apparently the coronavirus only affects protest marches but not farmers markets in North Sydney at 10.49am today. #BLM
Photo: @Thatfryboy pic.twitter.com/SL7zFPWIrG

Don’t get me wrong. Concerns about health ramifications with so many in one place are entirely valid and I have no problem with those who worry about potential spread of the virus.

BUT… if protests are the ONLY focus of your concern, not all those at Bunnings, shopping centres and local Markets too – and don’t even start me on the 5G anti-vaxxer protests that were “It’s a free country” MYEH! -  then, just like the Government, you are hiding your racism behind public health concerns. Which is what it appears the vast majority of media are doing.

So the #YoungDemocrats got the keys to the Twitter account again. They've been playing with some new video editing software and had some thoughts on antivax protests vs BLM protests and #ScottyFromMarketing's hypocrisy 😐#blacklivesmatteraustralia#RightToProtest pic.twitter.com/py1OcqKiVe

It really does make me both want to scream and cry.

I was honestly proud of my state, watching all those people march over the bridge. This from the home of Joh, Dutton, Hanson, Anning and the conga line of racist bigots we have sent to state and federal parliaments over the years to ‘represent’ us. I felt we have turned a corner and maybe there was hope that we were starting to kick racism to the kerb here in Queensland.

What really got my heart thumping was seeing a policewoman handing out masks.

Bloody Hell! As someone who grew up in Brisbane in the Joh era, this brings a tear to the eye 🥰 https://t.co/Ybqn4pLlpQ

Not standing as part of a phalanx of intimidating cops, but serving the public, ensuring safety.

Anyone who knows anything about protesting in Queensland knows that Police intimidation, often violence is the ‘norm’. It is more subtle in recent times, but just as intimidating. Protestors will always be surrounded by a wall of Police.

Not this weekend. They made good choices, they were there obviously, but not overt, there were no walls of cops with an eagle eye on protestors, batons at the ready. This is even more astounding when you consider that Police treatment of Indigenous, particularly deaths in custody was a major focus of this protest, for the Police to remain so calm and not insert themselves into the protest, in an adverse way, is just truly amazing.

Instead, they were alert obviously, but with more of a focus on public safety, not intimidation.

Who would have ever thought we could have a protest in this state, with crowds of those numbers, protesting racism of all things and it could be carried off so peacefully with cooperation between protestors and police? IN QUEENSLAND!

I know it is naïve, but I honestly expected to see this astonishing feat splashed all over media, particularly Queensland media, with pride. But nope, all we got was ‘selfish’ and ‘dangerous’.

If you only read the Courier Mail, watched ABC, Nine, Seven etc., you would not even know that this astonishing event happened on Saturday, that something very special happened in Queensland, something never seen before.

It honestly makes my heart break.

Imagine, just imagine how many in this state seeing this, realising how their racist upbringings are wrong, but still, stay silent, might have finally broken that seal and decided to be on the right side of history, making this state better and more importantly becoming true allies to Indigenous in this nation, if only they could have seen that footage, couched in pride, not framed in condemnation?

🙏 To all who could attend the marches in Queensland, you made us proud. You proved that even in the face of an overwhelmingly racist media and government that you would stand up and say no. That you could be good allies.

To all those concerned about public health safety and ONLY mention #BlackLivesMatter protests – looking at you Australian Government & Australian Media - then get your hypocritical, disingenuous racist butts in the bin! 🤬

Brisbane, you were incredible. It was an honour to walk today and do my part (the absolute least) as an ally. #BlackLivesMatter#StopBlackDeathsInCustody#SilenceIsViolence pic.twitter.com/X6etT1K8P8

It was. Respectful, dignified. A wonderful place with a dark history that is little recognised. pic.twitter.com/Ga1Y5oO2Tk

08 Jan 21 | It is only recently that some media organisations finally[...]

It is not Marina, it is you!