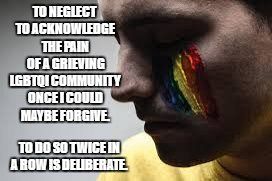 Thanks to the most awesome Jack @craigjack36 for this image

What happened in Orlando overnight was horrifying, beyond horrifying and I certainly don’t have the skills to do any justice to how so many must be feeling now, so I will not even attempt that. I know many in media are quoting how this is the worst ‘mass shooting’ in modern US history, not something to be proud of, though only US citizens can change access to the guns they seem to cherish. It is also being referred as the worst ‘act of terrorism’ since 9/11. What I’m not hearing a lot, is how it has to be right up there with the worst “HATE crime”, or at least the worst one in my living memory and my heart went out to every gay mate I have who I knew would be empathising and grieving with victims.

One of the first tweets I saw this morning was the one from our PM:

All Australians stand with the people of the United States today, against terror and against hate. https://t.co/iu0mAssKqb

I was sort of taken back that there was no offer of support or comfort to the LGBTIQ community? Though, was a short statement, so thought maybe was a heat of the moment statement, we would hear more.  Well, yes we did... The PM did a press conference from Townsville, before he got on to the Reef, which was obviously the original purpose of the press conference, he spoke, for quite a while, in relation to the Orlando tragedy.

Turnbull had time to give a nod to Howard for strong gun laws, our security & police forces also got a nod for protecting us, he also praised his own government for providing stronger laws & tools to keep us safe (you know, those ones that turn citizens into suspects UGH), then he sucked up to the US about how we always stand in solidarity with them - skies above Syria in Iraq, Afghanistan - and of course on our 'borders' here in Australia... I guess we can be thankful he didn’t stand in front of 10 flags - like you know who - screeching Death Cult?
What was missing was any reference at all to the Gay community. You know, the people who were actually targeted in this hate crime, the people who thought they were safe going to a Gay club? Not once, not even indirectly.  See transcript in tweet below:

To neglect to acknowledge the pain of a grieving LGBTQI community once I could maybe forgive. To do so TWICE in a row is deliberate.

I find it difficult to believe that there are that many homophobic bigots in Coalition (and Coalition supporters) that the PM felt that not hurting their ‘feels’ by referring to the scary ‘gayz’ was more important than actually being a Leader, offering sympathy and support to a sector of the community that too often is already treated like second class citizens?

Malcolm Turnbull is an intelligent man, he thinks carefully before he speaks.  Unless anyone can offer me an alternative reason, I can only infer that this omission was a deliberate ‘political’ move on the Prime Ministers part.

Finally around lunchtime another media release was put out, acknowledging the Gay community, quickly followed by another press conference which was supposed to be about Labor’s nbn policy announcement, though started with Mr Turnbull actually showing a bit of empathy for the group he seemed to have forgotten existed just a few hours earlier. (Jen has a good timeline of this ‘here’.)

So I have no idea if the change of heart and addition to the earlier statement was because advisors saw that people had noticed the omission, or maybe he actually felt ashamed of himself for his disregard of LGBTQI feelings? (I’d like to think it was the later, but, he is a politician, so...)

What was fascinating was how Journalists, who in the main part (not all) had been eerily silent about the PM’s lack of acknowledgement of the pain this hate crime directed at a Gay Night club would be feeling this morning? As soon as the ‘amended’ statement came out finally acknowledging the pain of the LGBTIQ community, there were disparaging tweets about those who were ‘politicising’ the death of more than 50 people? Really?

If responding to a mass hate crime by bragging about your security creds is not political I don’t know what is?
If responding to a mass hate crime against GAY people in a GAY club and not actually acknowledging those GAY people and their community is not ‘political’ then I don’t know what is?
If standing in solidarity with a community that is in pain is political, then call me political.
If pointing out that our ‘Leader’ played politics instead of being a ‘Leader’ and uniting people, offering support to a community in pain, then call me political.
I will happily own that and not be ashamed.

Political commentators like to read nuance into every word uttered by our political leaders, to stay silent this morning and then try to sell the message as just an oversight is being ‘political’. Media may like to act as if there is nothing to see here, but there is. Our PM's response this morning was very telling, very. Journalists ignore if you wish, though you may find yourselves in the same position - again - where you participated in explaining away and massaging Tony Abbott's 'intent' one time too many and look how that worked out for you?

In a matter of two hours I watched the narrative manipulated by media & politicians from truth to lies. What a time to be alive.

I can’t change what happened over night. I can’t fully comprehend how much what happened in Orlando resonates with the Gay community here in Australia. I can comprehend the worry and concern parents of Gay children have and what I can do is support my friends and call out the bullshit when I see them being treated as second class citizens or as political pawns only to be acknowledged when politically acceptable.  We all have a right to be ourselves and live openly.

If the Gay community can't expect support from our Prime Minister  when they are reeling from a tragedy of epic proportions, how the hell do we think it will play out when we have the ridiculous – and redundant - Marriage Equality plebiscite and the nastiness that will ensue from the usual suspects?

How any citizen who is Gay, has gay family or friends, hell, is just a decent bloody human being, could vote for the coalition when it can be considered politically expedient to not acknowledge you as a community at such a dark time is beyond me?