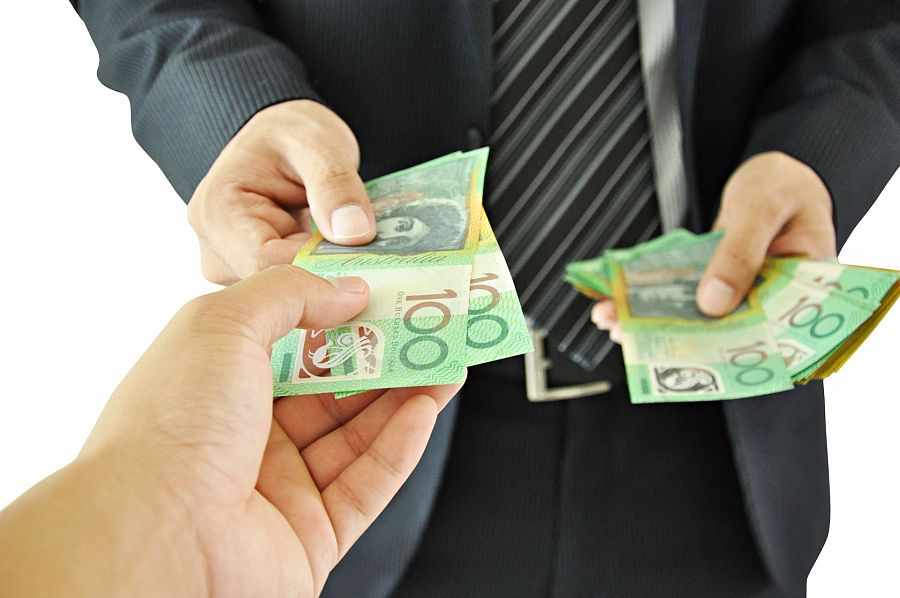 Do you want legislation with that?

Actually that is a rough estimate of the money donated to the Coalition at the last election by the banks and Finance sector, in reality, taking into account sketchy Foundations and the obscure naming of entities, is probably a lot more.

Forget the ‘narrative’ we are hearing on the telly about tit for tat politics and supposed distraction from ABCC legislation, the real “distraction” is PM Turnbull protecting Liberal Donors above Australian Citizens.

The Prime Minister recently gave the banks a nice little heads up that they better get their act together, which of course was roundly applauded by media and we were all told that Mr Turnbull really does care about us being screwed over by the big banks. Problem solved, nothing to see here now.

Of course, you only have to follow the great work done by Adele Ferguson, Michael West and others to know that what has been happening in the Financial & Corporate sectors in recent years is beyond the pale, and what has been reported is probably only the tip of the iceberg. The Prime Minister of course disagrees.

Really? If that is so, why are there so many instances of overcharging, financial planning scandals, refusal to pay out Insurance claims, mortgage fraud and my personal favourite, manipulating rates? Considering the money and power in the Financial sector, it is astonishing that media have even been able to find out this stuff so far, makes you wonder what else they have been up to?

If you listen to the conga line of coalition MP’s on the telly or talk-back radio, a Royal Commission is just a ‘distraction’ by Labour to take focus off ABCC and the evils of Unions in the Construction sector OR will hurt confidence in the sector and therefore our economy. Both excuses are utter bullshit.

Joe Blow & Jill Dill out in punterland don’t give a rats butt about the ABCC, in fact, even with all the #TURC hype, it did not uncover mass corruption in the industry at all, in fact, not even all of the 45 (yes only 45) referred for further action were Union officials, some were in fact businesses, but hey, never let the truth get in the way of a good Union bashing ‘vibe’. Obviously it is only acceptable to bash Unions, not Banks, oh and of course, the mechanisms in place were NOT good enough to control the Unions, yet they are for the Finance sector?

We always hear how the Australian Labor Party are controlled by the Unions, and to a certain degree, they do have a lot of power in the party, some may say too much (I would be one of them). Though, the ‘reality’ is the ‘good’ Unions do in ensuring minimum wages and working conditions for all of us far outweighs any of the so-called thuggery.

Can we say the same about the Finance Sector, which as the below graph shows, heavily back the Liberal Party? To rub salt into the wound, we, the taxpayer, underwrite the Banks when the going gets tough, like during the GFC, yet they don't seem to feel the same need to support the taxpayer or nation in return, they blithely ignore the Reserve Bank on rates and pretty much their answer to any scrutiny is 'better get a lawyer son, better get a real good one' :( 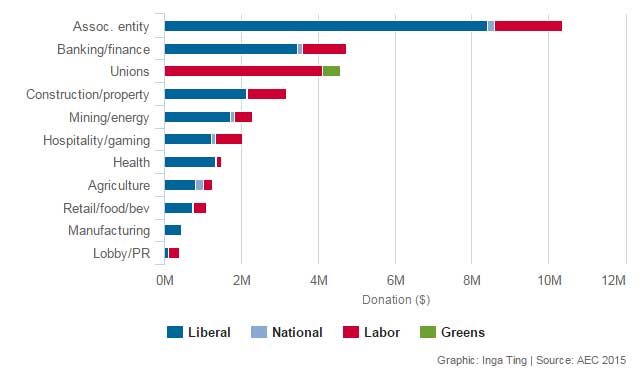 Most interesting in that graph (by Fairfax’s Inga Ting and Patrick Begley, “Political donations: Mining hits back at Labor” as it is an illuminating piece to go with that graph) is the category of “Assoc. Entity”, a big chunk of that are various ‘financial’ types too, so the amount of money donated to the Liberal Party is staggering.  Considering the use of the likes of the Free Enterprise Foundation and all sorts of odd ‘entity’ names, the figure is probably higher than we even imagine, if only we could work out who all these donors were? Visit the AEC’s Summary of Donations and knock yourself out trying to work it all out, I couldn’t :(

Does anyone really believe that the millions donated by the Finance sector to the Liberal/National Party is not the real reason why Malcolm Turnbull and the Coalition will not even consider a Royal Commission into the sector?

Doubling Down: These Businesses don't give money away for nothing, there has to be value for the business and shareholders, so why do they donate such vast sums of money to political parties? Worse for us dumb punters, they then write off those big donations on tax? So it is pretty much a lose lose situation for us at home.

I’ve not been a fan of the ALP in recent years, their teaming up with the Government on National Security to make us all suspects, not citizens has thoroughly disgusted me.  This call for a Royal Commission has slightly redeemed them in my eyes as it is not just ‘populist’ politics as the talking heads like to moan. Yes, it IS popular with punters, but they would have had some very hard discussions in the ALP party room with a lot of nervous nellies stressing that they will have to fight an election with less donations (as happened with the Mining Tax). Worse, that money they miss out on will go to either the Liberal Party or a campaign (ala Mining tax ads) to fight them. So there is a real cost here for the ALP to push for this commission, a cost that the media are not discussing nor giving the ALP credit for.

As the amount of money the Finance sector donates to political parties is so large, it then stands to reason that the amount of money that the ALP stands to lose in donations to fight this election will be staggering as well. The Press Gallery are very aware of these figures, somehow I have the feeling if this was Abbott or Turnbull making this announcement, not Shorten, terms like “Crazy Brave” would be tossed around, alas...

This discussion about Financial Services donations is one that we need to have. Tax Havens, PM's money in the Caymen's, Political Donations are all legal if declared to relevant entities. Going one step further to see 'benefit' gained is where it gets murky and is hard to prove if any wrong-doing has happened. BUT you don't have to be a forensic accountant to put two and two together to come up with favourable legislation for big money donors?

The Financial sector is all pervasive in our lives, Joe & Jill are very aware of it, from their mortgage to their credit card and its ludicrous interest rate when money is supposedly cheap to borrow now. What Jill & Joe are not aware of is how convoluted the whole Financial sector is. Even if you are not actually at the worst time of your life, losing your home, dying and not getting your insurance etc. it is bloody hard to work out how to make a complaint. Worse, as a one-off punter you will most likely be ignored and even if you do get through all those hoops to have either ASIC or APRA notice you, well, with the legal strike power Banks have up their sleeve, you will most likely be dead before you get even a skerrick of Justice. Fact is, the little person cannot take on the Big Banks and Finance sector.

Treasurer to work with the banks on their 'culture issues', reports @PhillipCoorey https://t.co/kQKNRiRUiM #auspol pic.twitter.com/N600Xfw844

The latest joke is that the Treasuer will have a chat to the Banks about their culture...  Really, this is the Treasurer who appears to be the front-man only for that portfolio and is always one step behind when it comes to Budget announcements? What is he going to do? On past form, his big idea was to ask people "Where the bloody hell are you?", soooo I'll let you finish where you think those conversations between Scott Morrison and the big Finance bosses will go. Hell, I'm surprised the Government is not sending in their favourite money man Senator Sinodinos to sort out those 'culture' issues, surely his vast experience in this area would be helpful? ;-)

Government is supposed to have the well-being of its citizens as its first priority. Supposed to. I would argue that this particular Government has its donors as the primary priority for them and we, Joe Blow, Jill Dill, you and I, come way way down the list. It is time we demand that our Government, regardless what is the flavour of the day, put us first, not their donors.

I want a Royal Commission into the Banks & Finance sector, While I'm whining, I want a Federal ICAC too!!

12 April 4.10pm 'It would cost them seats': Banks refuse to rule out mining tax-style campaign against royal commission Fairfax