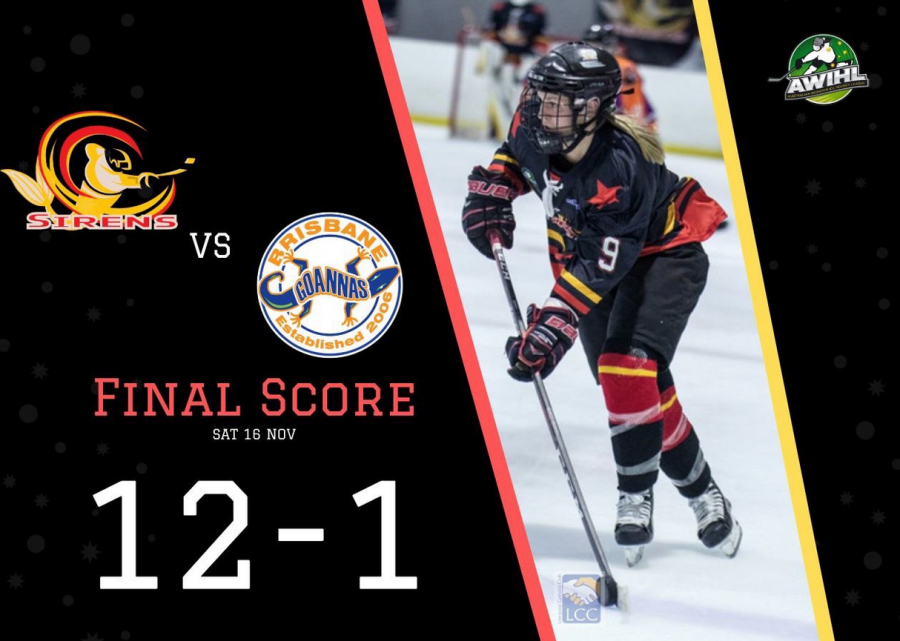 Never too old to learn a new sport, even as a spectator 😉

Did you know we had a National Women’s Ice Hockey competition in Australia? I didn’t, well, I didn’t until a few weeks ago. As a proponent of women’s sport in this country, have to admit, I was pretty disappointed with myself. Then again, I didn’t even know we had any sort of national competition for ice hockey at all, thinking of it as only an overseas sport I suppose.

Did you know we had a National Women’s Ice Hockey competition in Australia? I didn’t, well, I didn’t until a few weeks ago. As a proponent of women’s sport in this country, have to admit, I was pretty disappointed with myself. Then again, I didn’t even know we had any sort of national competition for ice hockey at all, thinking of it as only an overseas sport I suppose.

My only experience with Ice Hockey is the odd movie, a game in Calgary way way back in the day I barely remember and the Primary School end of year trip to the ice hockey rink which only elicits memories of being scared and wet jeans that were still not dry in the butt by the time we got back on the bus. So to say I’m clueless about the sport would be an understatement LOL!

Anyhoo… being the nosey sort I am, had to look into it. Also being a mouthy sort, thought I would share my first time watching a new sport experience with blow by blow observations on twitter, as I do 😉

The competition is called the Australian Women’s Ice Hockey League (AWIHL) and has 5 teams, Adelaide Rush, Brisbane Goannas (Junior program called Gecko’s which makes me smile), Melbourne Ice, Perth Inferno and Sydney Sirens. The season kicked off on the 26th of October, so for me, was in that sweet spot where I was suffering from Super Netball withdrawal, AFLW had not started yet, NRLW was well & truly over and I was not sure if I wanted to invest in the WBBL to more than just watching the odd game. Hence the Ice Hockey grabbing my attention.

Yesterday afternoon I finally got to watch a game, live – well live at my computer LOL!

OK going to be giving this a go! I have no idea how ice hockey works so this will be fun 😉

Advice from @AWIHL Hockey 101
five skaters and a goalie on for each team
three forwards and two defenders.

objective is to get the puck into the net.

the rest is controlled chaos 😳 https://t.co/akMaYiNTIV

Now remember, I know sweet eff all about this game, rules, how it is played, anything, but… AWIHL make it easy for you, they have the game live on youtube, so not like you have to be subscribed to and fork out any cash to an app or streaming service to give it a go, which I personally think is a massive tick and the commentary is great. Though more about that later.

Me being me, I of course have no shame in admitting how clueless I am about ice hockey – well anything in general LOL! – and I have to tell you, I was amazed with the response from people on twitter. Happy to help, people I have never spoken to happy to give me extra info, not one person treated me like a drip or interloper, the AWIHL twitter account @AWIHL are even happy to help. Let’s face it, how often have you seen a sporting bodies official social media account happy to assist, or even notice a newbie? I get this is not a sport that has squillions of fans in this nation, so maybe easier for them to handle the social media, but still, an excellent attitude to have and I for one appreciate.

Better yet, and this is something you don’t experience often when you love a women’s sport, many of the people who didn’t know me from a bar of soap but popped up to answer my questions or respond to my random observations, did so with the best intentions, with quite a few of them being blokes. Yes blokes!!

As most women’s sports fans would know, the ‘dudebros’ experience is a pretty crappy one. Really doesn’t matter too much which sport you might tweet about there will be some random dudebros jump in to tell you “who gives a shit is only the birds playing…”, or “dunno why the comp wastes money on this female politically correct bullshit…”, you get the idea. In my experience so far, the AFL dudebros would have to be the worst, still puzzling as to why that is SIGH!

But the ice hockey? Not yet… I’m sure at some stage I will experience the put down, but yesterday arvo of ice hockey was a seriously pleasant experience both watching and on twitter.

Also what was pleasing was the lack of attack from purists, something that happens often when you attempt to learn about a new sport. It is human nature to try to relate something you are unfamiliar with to something in sport you do know, as a baseline of understanding to then advance further. Though normally if you do that, you will get a purist who will jump straight on you, outraged with “how dare you… has a right to stand alone… blah blah”. Yes they do, but hey, give a newbie a break, still trying to wrap your head around totally new concepts and all that crap does is turn you away from even attempting to learn the sport further.

When I saw the “faceoff” and tweeted saying similar to the old netball toss-up I nearly deleted the tweet straight away, thinking I would get blow-back, but nope, nothing,  just a confirmation this morning from the bloke who did the commentary the afternoon before that is was a “good way of looking at it”.

@YaThinkN Netball toss up is a good way of looking at a hockey faceoff. https://t.co/7KYzt92cNd

Watching on youtube was easy, dead easy. The footage was pretty good, the commentators, Eric Brook and Alyssa Longmuir are great. Their knowledge - even though most went over my head – of backgrounds of players, previous games etc., was phenomenal, Alyssa in particular could impart knowledge about where players came from, historical info on teams and her assessment of where they were heading in a manner that was interesting, not condescending as many expert commentators can be, more pulling you into the tent, not lecturing from outside it. What really got me most was the actual play by play commentary itself. I can tell you now, I have watched a lot of sport over the years and it has been a very very long time since I could walk away from the telly to make a cuppa, listening to the commentary and still have half a clue as to what was happening on the screen. Considering ice hockey is so fast, that blow by blow commentary really is a feat, something that has been lost with many sports nowadays where it seems it is more about ‘banter’ or a commentator flogging their own opinion about something ignoring the actual play in front of them. I had thought the days of ‘running commentary’ with a ‘side-line expert’ to add more indepth knowledge or stats was a thing of the past. I can tell you now, not in the Ice Hockey and I for one was really happy to see and more importantly hear it again.

I won’t go too much into the game itself, as, well, it was too fast for me to take it all in when on such a steep learning curve with rules etc., Suffice to say it was exciting, non-stop, skilful and even though the score ended up being (I think) a blow-out with Sirens taking out Goannas 12-1 with some outstanding hat-tricks, it was still not boring, as a blow-out often can be.

In what can only be described as a definitive victory, the @Sirens_hockey have defeated the @GoannasHockey 12 to 1 in a spectacular display

How those women can keep up the tempo, changing direction all the time, at speed is astounding, stamina more so and to be frank, with that puck flying, sticks flying, well, not for the faint hearted either. The fitness levels would have to be outstanding and the Goalie, wow, she must have eyes in the back of her head as small goal area, but surrounded by players in movement, even behind her. You don’t have to understand the game to appreciate the athleticism on show and I for one cannot comprehend why names like Sirens’ Steph Cochrane, Nadine Edney and Kayla Nielsen are not more well known?

All up it was a very entertaining afternoon and I will be watching again. Many other sports could learn from the Ice Hockey competition, to view was easily accessible, the commentary was great, the fans on twitter were welcoming and helpful and the women on the ice were sensational.

The return game is this morning. I will of course be watching it and being a Queenslander will be hoping the Goannas have a better showing against what are obviously a very slick outfit in the Sirens. Also hope I get to wrap my head around the “zones” better this morning, though I am sure I will have extra questions that I didn’t think of yesterday, coz that is the way I roll LOL!

Honestly. If you are at a loose end, think outside the box and give the ice hockey a go, particularly those of you who are advocates of women in sport.  If you like hard, fast paced sport, you won’t regret it. Better yet, if you are anywhere near the Liverpool Catholic Club Ice Rink this morning, rock on down and check it out live!

I can’t wait until I can do that trek down the Bruce to catch a game live at Boondall. Just think, I can annoy people with questions in real life then, not just online 😉