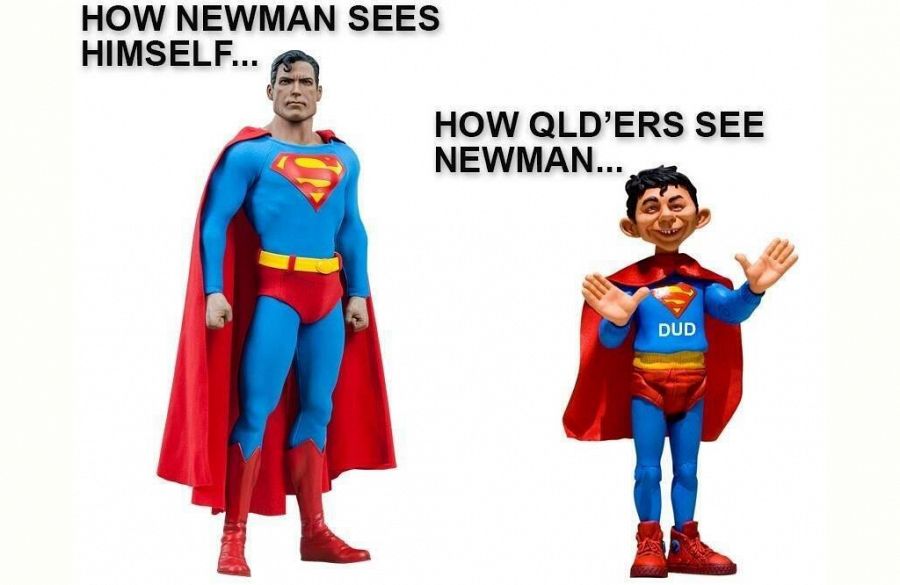 Well I know the LNP love a good spin doctor, they pay enough for them, and trying to look ‘strong’ is supposedly comforting to us punters and make us feel secure in their leadership, or that is the theory anyhow.

Many of us actually find the hi-viz antics of our esteemed Prime Minister Tony Abbott rather embarrassing, but, Queensland Premier could have topped him with the putinesque style spin – who would have thought that was possible?

Yes friends, it started last week with Qld LNP president Bruce McIver telling us  in The Australian and not behind the paywall (of course):

"Queenslanders can be very confident that whatever the future holds, (with) Campbell Newman as premier we will certainly ... all be able to sleep better at night knowing that he is there."

Really? We Queenslanders sleep better at night knowing Newman is our leader? That sounds like something you would hear a brainwashed ‘bad’ Korean military general say about their ‘Dear Leader’?

Watching the local news last night I nearly choked on my wine.  Not only does Campbell Newman help us sleep at night, he is also our ‘saviour’. Yep, you read that right:

“I’m the guy who got us through the Brisbane floods, The Gap storms in 2008, made sure that the people of Bundaberg were looked after, particularly got those people off those rooftops”

If you think I am exaggerating, David Marler kindly saved the video footage for us - Newman, Qld's saviour: "I'm the guy who got us through the Brisbane floods."

Personally I blame the likes of David Koch giving Cambell Newman such a high profile during our 2011 floods. Newman was all over the media, yet not once did any of them ask how he had the time? Obviously he was #SuperNewman then too, saving Brisbane and chatting to media at will, the man could do it all. Shame none of that media actually looked into the Disaster Management status at the time to understand that Newman had very little to do with the floods management, his Brisbane City Council staff were being run by Disaster Management, not him. But hey, let’s never let truth get in the way of good media PR :(

BUT to claim he saved us in floods is seriously taking the piss. “...made sure that the people of Bundaberg were looked after, particularly got those people off those rooftops” WTF! He got on his trusty cape, swooped down on those rooves and plucked those poor buggers in Bundy to safety? Yeah Right...
For a giggle, check out #SuperNewman and you get some comedy gold ;-)

@Can_do_Campbell @YaThinkN What about the time there was that giant kitten terrorising George St and #SuperNewman saved the city?

So there you go people. If you want to sleep well at night, knowing that you will be saved from Natural Disasters, then Queensland’s Campbell Newman is your man. Seriously, you can’t make this shit up.

#SuperNewman in the News ;-)
Amy Remeikis of Brisbane Times had some fun with #SuperNewman compiling a best of Tweets
John Birmingham must be the wittiest man alive with his "You wish you were Campbell Newman" (warning: No food or drink in mouth whilst reading unless you wish sprayed on keyboard LMAO!)
Richard Chirgwin has come up with a wonder little ditty paying homage to the Super Human powers of Queensland's Dear Leader in "Newman's everywhere!", you should listen to the song first so the words flow ;-)