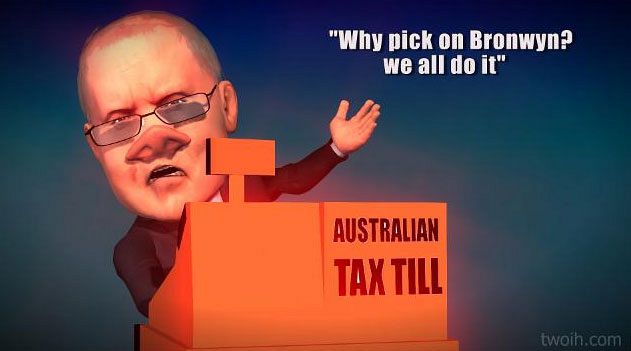 If I hear one more person say, “Oh they all do it...” in regard to rorting entitlements I swear I will scream. That is not good enough. These people are on OUR payroll. If you owned a business you would not cop this abuse of expenses that we see from Ms Bishop and other MP’s of all flavours.

If I hear one more person say, “Oh they all do it...” in regard to rorting entitlements I swear I will scream. That is not good enough. These people are on OUR payroll. If you owned a business you would not cop the abuse of expenses that we see from Ms Bishop and other MP’s of all flavours.

The theory in Government – well in media, if watching Sky News this morning is anything to go by – is it seems to be if you apologise nicely enough (like Ms Bishop has ‘finally’ done) and pay the expense back all is good, carry on, nothing to see here...

Seriously? You worked for a ‘business’, used a couple of grand of business funds to go to a friends wedding, or say interstate for the footy grand final and then got caught by your boss after the fact, do you really reckon he would say. “Oh alright, you have paid me back, of course I still trust you to hold the position you do...”?!  Not a hope in hell.

If the amount was large, the cops would be called in. If the amount was smaller, and you weren’t sacked for gross misconduct on the spot (with a terrible reference), best case scenario would be written warning and demotion.  Keep in mind, your boss is looking at this as THEFT, and a breach of trust.

This Government loves to flog the concept of ‘good business practice’ as to why they prefer to outsource Government services or entirely sell them off to private enterprises. So let’s apply similar to them...

Way back in the day before I was a daggy middle aged ranter out in the regions, I used to actually work in Finance for a very large multi-national. I know, shocking huh ;-)  So let’s discuss how this business dealt with ‘Expenses’:

Note the above was not babying Managers or being distrustful, it in fact meant streamlined budgeting, good use of funds and allowed Managers to focus on their core job. Sometimes it was awkward having to issue a "please explain" to a Manager who was earning squillions times more than you, though you had the back up of your own bosses and as every expense was pre-arranged it was pretty rare to have any issues. Sometimes a new Manager would try it on to mark his territory, but as there was 'next to no' wriggle room they never got away with it, in fact, it hurt their chances of going further in the company.

So let’s relate that back to Government if my scenario above was implemented, let’s call the ‘Business Division’ Longman.

Obviously some MP’s have extra roles they perform, ie Prime Minister, Speaker, Chair of a Committee etc. and would require extra staff or expenses to fulfil those roles. That is not a problem, there could still be set ‘rules’ & ‘regulations’ per extra role that could be added to the ‘electorate’ staffing/expenses and these would be set in stone, regardless of WHO happened to be in that role at the time.

Changing the rules to my scenario would mean...

Another bonus of my system would be the dodgy situation we have seen reported about Mr Andrews, yes, getting $75k off the gambling industry via a fundraising entity (Menzies 200) is a potential conflict of interest – that is a rant for another day – but what is worse is the misuse of a staffer who is on OUR payroll as reported in Fairfax today:

Filings with the Australian Electoral Commission filings show that former Andrews staffer Adam Wojtonis was secretary, treasurer and contact point for the Menzies 200 Club from 2010-11 until 2012-13.

Our tax should never be paying for an Employee to organise political fundraisers EVER!

In my scenario, Yes, maybe an MP could get their PA to organise their fundraising stuff, but doubt very much they could get away with it as others in the office would know it is against the rules and pretty sure they would roll on them to protect their own jobs.

Consider this... If the Speakers Office employees, all of them bar one PA, were standard Speakers staff, they handled all administration for the Office of Speaker, year in year out, do you really think from Slipper to Bishop that the likes of the Vineyard tours or Chopper jaunts would have gotten through to Finance to be paid for by us?

In the meantime, since we don’t have a true system of oversight, I think we need to stop copping, “Oh well, I got caught, sorry about that, will pay it back and all is forgiven...” It isn’t!

When elected representatives abuse our trust in them by rorting entitlements they are really doubling down. It is theft and in fact fraud as they have to sign off documentation saying they are on ‘official’ business. It is not hard to consider, “hmm not sure if this is an ok expense or not, best check & get a ruling BEFORE I claim it...”. Quite frankly, if you can’t have the commonsense to do that, you sure as hell don’t have the smarts to be representing an electorate in Government and you deserve to be legally charged for making a fraudulent claim.

Ms Bishop has – finally – apologised for her “error of judgement” this morning on a mates radio show. But this is not good enough.

In what business could you be pinged for misusing your expenses – more than once – and signing a form saying they are legit business, not own up to it until you are caught, then say sorry and all is forgiven?

If a large enough amount was rorted – ie claimed fraudulently - Police would be called in and you would be charged. If smaller amount, you would be sacked or demoted. Let’s stop the leniency for pollies and apply real life ramifications to them, as they are on OUR payroll and I’m not sure of any other businesses in real life where staff on the payroll get a better deal and more leniency than the owners of the actual business?