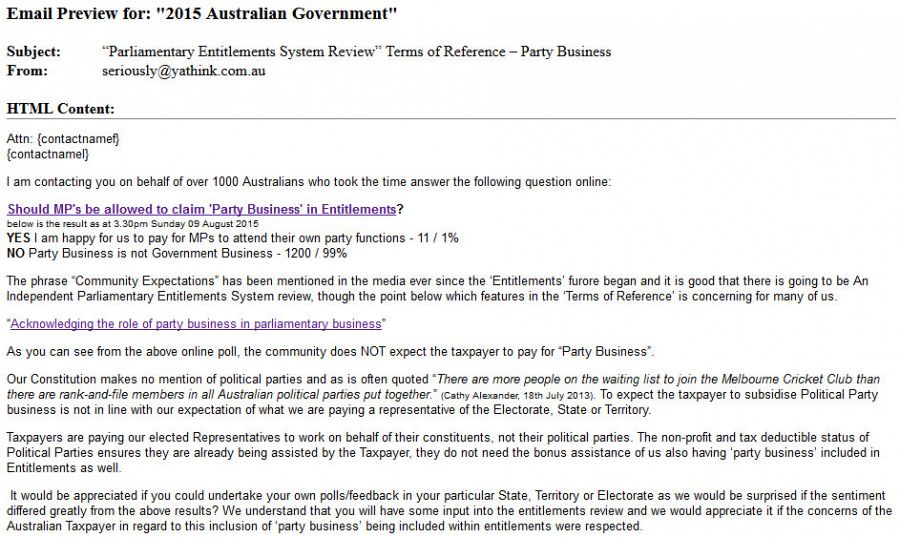 Email: Party Business within Entitlements does NOT meet Community Expectations

I am contacting you on behalf of over 1000 Australians who took the time answer the following question online:

The phrase “Community Expectations” has been mentioned in the media ever since the ‘Entitlements’ furore began and it is good that there is going to be An Independent Parliamentary Entitlements System review, though the point below which features in the ‘Terms of Reference’ is concerning for many of us.

“Acknowledging the role of party business in parliamentary business”

As you can see from the above online poll, the community does NOT expect the taxpayer to pay for “Party Business”.

Our Constitution makes no mention of political parties and as is often quoted “There are more people on the waiting list to join the Melbourne Cricket Club than there are rank-and-file members in all Australian political parties put together.” (Cathy Alexander, 18th July 2013). To expect the taxpayer to subsidise Political Party business is not in line with our expectation of what we are paying a representative of the Electorate, State or Territory.

Taxpayers are paying our elected Representatives to work on behalf of their constituents, not their political parties. The non-profit and tax deductible status of Political Parties ensures they are already being assisted by the Taxpayer, they do not need the bonus assistance of us also having ‘party business’ included in Entitlements as well.

It would be appreciated if you could undertake your own polls/feedback in your particular State, Territory or Electorate as we would be surprised if the sentiment differed greatly from the above results? We understand that you will have some input into the entitlements review and we would appreciate it if the concerns of the Australian Taxpayer in regard to this inclusion of ‘party business’ being included within entitlements were respected.

On a personal note:
Many of us understand that most politicians work very hard, long hours, often away from their families for weeks at a time. Most of us have no issue with the healthy remuneration you receive for this.  Nor the extra remuneration for extra responsibilities that certain MP’s and Senators take on.

Though we are always hearing how the cost of Government needs to be trimmed and the Age of Entitlement is over, so it would be appreciated if you could understand that the entitlements you already receive are above and beyond that of the ordinary taxpayer (transport to and from Canberra, offices in Parliament House and your electorates, Com Cars, Accom assistance in Canberra, Office staffing etc...)

With 76 Senators and 150 Members of the House of Representative, this is an awful lot of Government Public Service that the taxpayer is already paying for.

I would also like to remind you, that you are in a position where you may work hard for a particular term – or terms - of Government though during this period you raise your personal profile, make contacts and gain experience that stands you well in post-Government employment, not withstanding a very generous pension that you can access long before the average Australian can.

Please consider very carefully your obligation to the Australian taxpayer, it is not a tenable position for a Government to be in where the average voter has little respect for politicians due to a perceived sense of entitlement by some. To add Party Business to this very large bill that we are already paying when the vast majority of voters do not even belong to a political party, nor care about them, is definitely beyond the pale.

Thank you for your consideration,
Noely Neate
On behalf of those surveyed online.

Note:
The above is the exact email that has been sent. I sent to all MP's & Senators as advised in original post. Please also note that correct honorific & electorate was used in each email, ie mine:

Hope it helps guys. If I get any bounced emails I may be hitting you up for help to get correct email address :)

Sadly party business is not really being mentioned in media, but at least finally saw this today YAY!
Terry Sweetman: MP expense claims should relate only to their parliamentary duty, not party affairs - The Sunday Mail, Sunday 09 August 2015


PS: This is a very good idea by Craig Thomler (@craigthomler) and it would be great if you could support it "Include ordinary citizens on the MP entitlements review panel"  as there are some very good people on the Review panel, though, they are still people from Government or Business who have had very high wages and extremely generous entitlements themselves so input from 'ordinary citizens' really is needed to ensure "Community Expectations" are not only considered but met.