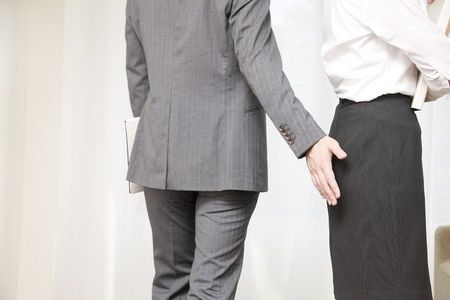 When I was a much younger woman in my mid 20’s working for quite a large corporation I found myself in a sexual harassment situation and all the complications that come from making a complaint. Do I?. Don’t I? Will it make my job worse? Will I get picked on by other Managers (male of course)? Will I even be taken seriously or will it be considered a storm in a tea cup? The list goes on, it is a terrible position to be in. You are battling on more than one front, as there is the obviously power imbalance between a boss (Manager) and employee and of course the sexism that can blind many men who honestly can’t see what they have done is wrong, ie How often have many women heard the phrase “Geez can’t you take a joke”?

Now that I’m a lot older, with more experience and confidence I would handle a situation like that very differently, however, it means when Briggs overseas shenanigans was initially reported my first thought was not, “oh geez what a grub...” (that was second), it was “OMG poor woman, I hope she has good support and advice to help her get through this," as anyone who has ever made a complaint against a superior knows it does not stop there.

Anyhow, I won’t get into the Briggs saga, enough has been written about him and thankfully for a change, bar a few usual suspects, his behaviour has not been condoned, though with his sharing of the woman's photo it is nowhere near over yet.

What I do take issue with is Dutton today and more importantly the attitude of so many, particularly in the media who seem to think:

OOPS! Dutton stuffed up and sent a text to the wrong person, how funny, what a drip, but hey, Sam’s cool with it and he apologised, so all good, nothing to see here now.

For mine. That is not the case. Personally I don’t really care that Samantha Maiden is sweet with Dutton’s apology, that is her opinion. My issue is that the text was going to Briggs.

So let’s think about this for just a moment. Timeline is as follows:

In my opinion it is not end of story.

Why would Dutton be texting like that unless he was consoling Briggs in relation to Samantha Maiden having a go at him?

So this is my point:

How is it acceptable for a high ranking Minister to tacitly condone behaviour that the Prime Minister himself said was “serious”?

So not only has this Senior Minister sent a text to cheer up fellow ole boy Briggs, he has done so in an entirely inappropriate manner and doubled down by using sexist language?

Dutton may as well have said “Cheer up mate, don’t worry, she is just a bitch...”

Which to be frank, if he was not so incompetent that he sent it to the wrong person we would not even really know that he used this sort of demeaning language, nor that he was a Briggs supporter. This is a man who’s portfolio has to be one of the most sensitive and good judgement is paramount. I will leave it for others who have more expertise in the Asylum Seeker area to discuss how he handles this portfolio, but the point is, this bloke has shown poor judgement more than once yet much of the Australian media seems to think that the issue is his swearing at a Journalist, but it is ok, she has accepted his apology?

Let’s take the distraction of Samantha Maiden receiving text instead of Briggs out of this scenario.

How do you think media would react if Peter Dutton called a press conference, said openly, “look, Jamie Briggs is a top bloke, stop writing nasty stuff about him”? As that is basically what Dutton was doing, he was ‘privately’ backing and supporting Briggs. How is that appropriate?

Dutton shouldn't be sacked for being a putz with his phone. Sack him for supporting zero consequences for workplace sexual harassment.

The fact that the likes of Senator Stephen Conroy also can’t see past a misspent text says a lot about our nation and how we approach sexism and the acceptance of it on both sides of the political divide :(

Yes, you've got to be careful these days, choosing with whom to share misogynist comments https://t.co/IREpUlwO2O

We have now been informed that Prime Minister Turnbull will not be commenting on this issue. He is not on holidays, but his office has said he won’t be commenting. So, both the Briggs issue with sharing around a photo of the woman who has made a complaint about him AND Dutton’s being supportive of Briggs, plus using that old fave all of us ladies love ‘witch’; not to forget he emphasised it even more with putting “mad fucking...” in front of it; how is this not worthy of our PM to comment on in regards to Ministerial standards or further investigations into behaviour?

To think it was not that long ago that our Prime Minister said the below:

Sadly, this is exactly what we have seen in the past few days, the victimisation of the woman, excusing the man and now minimising the severity... If Mr Turnbull wants to prove that he is a better leader than Mr Abbott and to be frank, Abbott’s tacit permission for his supporters to be as misogynistic as they like means the bar was not set that high (well it was on the ground) for Mr Turnbull, yet it appears we are to be disappointed and he is really is no different from his predecessor with his attitude towards women :(

This sort of attitude saddens and worries me that we will never see respect for females in our 'Leaders' during my lifetime, particularly when so many in higher positions, both in media and in government can't even see what is wrong in the first place?
Noely
PS. Remember these days #GoodTimes ;-)

RT @dfg77 Remember when Dutton demanded an MP be removed from their role because of sexist text messages? #auspol pic.twitter.com/FG0FMuroNg

As I advised the minister yesterday his language was clearly inappropriate as he recognised by apologising immediately to Ms Maiden.