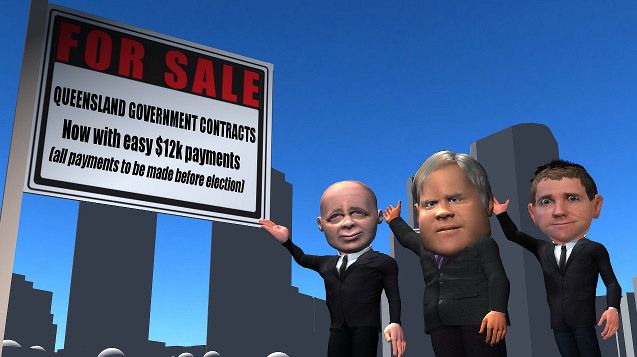 You know what is “obnoxious” Barnaby Joyce? You!

Queensland after Wayne Goss became Premier bore no resemblance to Queensland prior to THAT election. Wayne Goss may not have been a man of as far-reaching stature as Gough Whitlam, though it would be an ignorant person who could not give him credit as being pivotal in Queensland’s history and changing us as a state forever.

As we all know Gough Whitlam died recently and the tributes flowed. Sadly, some media commentators could not pause their cheerleading of the Liberal National Party long enough to show any class, looking at you in particular Greg Sheridan (check out The Drum on the day Whitlam died, shameful display of sour grapes more akin to a kid saying their footy hero is better than another’s). Though Sheridan was not the only one, quite a few LNP media cheerleaders and MP's felt the need to play nasty, proving the point that power, affluence and influence don't equal class. Personally I try to ignore these commentators and MP’s, as my parents always told me, “if you can’t say something nice about someone then don’t say anything at all”. It is a shame the so-called ‘Adults’ in charge don’t seem to subscribe to the same basic etiquette that most of us do, particularly in regard to the death of an influential public figure.

As I was born in 1968, I could only appreciate that I was a ‘beneficiary of the Whitlam policies’, in fact, I was rather jealous of those who were around at the time to experience and understand that something had changed in our nation. Many stories have been told and I have thoroughly enjoyed reading and hearing them.

For me, the most life impacting event politically was the summer of 1989 when Wayne Goss became Premier of Queensland. My entire life up until that point had been ruled by the Country/National Party. You truly had to grow up in Queensland to appreciate how this political party led by Joh Bjelke-Petersen was all consuming. Unlike recent times when politics is treated more like a team sport, Queensland back in the day was a dictatorship, pure and simple. No dissent was allowed, repressive laws, civil liberties was a dirty phrase and the whole electoral system was rigged to ensure the status quo stayed.

Everyone is aware of the Police State that came into being and the resulting Fitzgerald Inquiry and of course how Joh should have gone to jail, it was only old age & a dodgy Young National jury foreman that saved Joh from the ignominy of not only dying in the clink but having his knighthood stripped. Something that Nationals today, like Barnaby Joyce seem to forgotten in their rush to sainthood for Sir Joh...

So that summer of 89 was a special time in this state’s history. For me, it was my first ever State Election vote. It may sound daggy, but at the time I honestly felt that one vote of mine helped to overthrow the Nationals, that I had participated in something historical that would change Queensland forever. I am not talking about looking ‘back’ fondly on that period, I am talking about reality, that was the vibe of conversations we were actually having that very afternoon on voting day at a backyard bash. Yes, a party, in fact I had three choices of celebrations to go to that day. The anticipation that the Nationals would finally be booted was that exciting that people who could not give a rats about politics were tossing the snags on the barbie and cracking open cold ones before polling booths had even closed. This sort of ‘interest’ and celebration on voting day by average non-political punters was unprecedented and has never again happened in my life time so far.

Judging by Barnaby Joyce’s unedifying comment below and in an interview he gave today, he obviously was not living in the same Queensland as me at the time?

Um Mr Joyce, I am a proud Queenslander, but hey, we owned and deserved that ‘hick’ tag, whether you like it or not. Read the whole piece, I know it is in The Australian – not behind a paywall - but hell, even they had the good sense to include some ‘real’ facts about the Joh era in the piece to ‘balance’ Joyce’s rubbish.

The excitement I described above was BEFORE Wayne Goss actually got into power, once he did, the changes he made seriously modernised this state which had been held back for so long. Joh was famously suspicious of education, thought the arts was a waste of time and majority rule just got in the way of him running the state, as he saw fit, not accountable to anyone, especially not the citizens of this state. Wayne Goss did let the Sunshine in. We could legally protest again, Homosexuality was decriminalised, hell, Mr Goss even understood that those pesky National Parks that obstructed miners actually mattered and maybe should be protected for future generations. I won’t even start on the Gerrymander or as some called it the “Bjelkemander”. Goss did a hell of a lot more than what I have mentioned and like Whitlam, in a very short time frame.

Queensland after Wayne Goss became Premier bore no resemblance to Queensland prior to THAT election.  Wayne Goss may not have been a man of as far-reaching stature as Gough Whitlam, though it would be an ignorant person who could not give him credit as being pivotal in Queensland’s history and changing us as a state forever.

Speaking of ignorant, this brings me back to Barnaby Joyce…

It is bad enough that an MP could not have enough class to be gracious upon the death of an influential person in Queensland’s history, but to raise the spectre of Bjelke-Petersen as though it is some sort of debate as to who is more important in Queensland is just downright childish. Obviously as Goss ended that era with his electoral win Joh will be mentioned. Mentioned, mentioned in relation to what Goss changed from that era, it should not be an opportunity for the likes of Joyce to rewrite history at the expense of denigrating an important historical figure. It is tacky, unedifying cheerleader type behaviour you would expect more from the ignorant sports fan who is shitty because some great batsmen has died and thinking his team’s batsmen was better nah nah nah nah type crap…

By the way Mr Joyce, next time you want to deify Sir Joh, better check your ‘facts’ are right? Just one little example: Your hero didn’t actually initiate the Fitzgerald Inquiry, just saying ;-)

Seriously Barnaby Joyce, take yourself outside and give yourself a good uppercut.

Maybe the likes of Whitlam and Goss dying is making Mr Joyce think about his own legacy he will leave behind and what people will say about him? Maybe he is sitting back on his rural property, basking in the patronage of his mining magnate, sucking up to the  Prime Minister in the hopes that some power will flow his way and trying to stamp himself as an ‘important politician’ in the media? Hell, for all I know he is only deifying Joh at the most inappropriate time to suck up to the National rusted-on’s in anticipation of a coup to topple current leader Mr Truss, I have no idea, nor do I really care. Just don’t think he speaks for us Queenslanders.

I don’t know about others, but for mine, the best thing that Barnaby Joyce ever did for this great state as a Senator for Queensland was leaving it!

12 Nov 2014: There has been a lot of feedback on twitter in regard to this rant, though have to say, this tweet below needed to be recorded for prosperity, is sheer Gold!

@YaThinkN I grew up under bastard Bjelke too. Ended up being his nurse in his last days - an openly gay nurse. Bet he didn't see that coming


Noely
PS. Sorry New England, some of us did try to warn you, he is all yours now, we won't accept any returns of faulty goods ;-)
As usual, graphic gratefully pilfered from Rob @TwoEyeHead more cartoons & animations at http://twoih.com