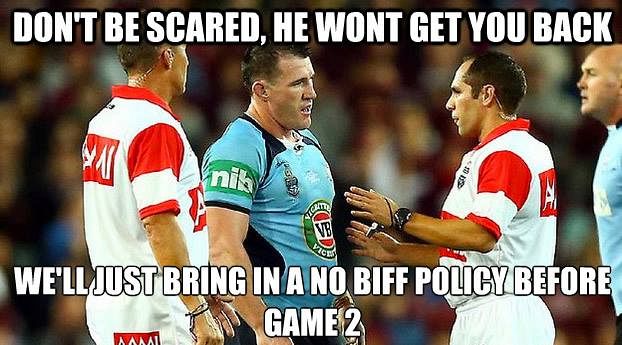 This meme from “Joe Johnson - State of Origin - Queensland Maroons - Simple the Best” Sums up Origin. NSW blithely changing rules to ensure their success, been happening for decades, making it all the more sweeter when Queensland wins against these odds.
Yes, that is a cheap Game of Thrones rip-off title, BUT, forgive me, I have good reason.  OK, let me start with the disclaimer that Mr John Birmingham IS my favourite Australian Author, I also love his regular contributions in Blunt Instrument, he is funny & sharp, often in a sardonic ‘thinky’ way.  Today sadly, he has let me down :(

Mr Birmingham, who lives in this great state of Queensland questioned why State of Origin matters, yes, titled “Remind me why this Origin thingy matters”.  Now I know Mr Birmingham has children and this is important.  Children who are being raised in this state.  What sort of example is he setting for them?  I would not normally be so brazen as to lecture the likes of Mr Birmingham, though in this situation, I feel I am qualified.  I may not be a word-smith, though I speak from authority, being BrisVegas born, hailing from an illustrious Queensland heritage featuring the likes of Mt Isa, Aramac, Delaneys Creek and more in my heredity background and upbringing ;-)


Now, I can give Mr Birmingham many reasons, at the very least we need something to cheer for and be positive about in the wake of 12 months of Queensland Government slash and burn policy.  Though I won’t go into the myriad of superfluous reasons as to why Origin is important in Queensland.  Instead I will relate a little historical bed time story to help Mr Birmingham understand the importance of Origin so that he can also help others who are latecomers to Queensland and choose to make it their home.  Yes there will always be the 'superior' types that choose classify SOO as some form of parochial bogan sporting display, and yes, there is a small element of that, as there is in every sport.  But for the 'true' Queenslander it is more than that.


Once upon a time in Queensland, back in the day when most Queenslanders were actually born and bred here, we had really good Rugby League competitions all over the state.  Back in the days when kids were allowed to run on the field at the end of the game and a Jersey lasted years not one season.  The big-time being the Brisbane competition.  On Grand Final day you would see cars all over the city & suburbs with team colours fluttering from antenna’s.  Families all followed favourites like Valley’s, Redcliffe, Wally’s Wynnum etc.  We all suffered & cheered at the same time when the likes of a Mal Meninga left Souths to join the big smoke comp team of Canberra.

See, back in the day, the Sydney competition was the Mecca.  Dad’s all over Queensland whinged about sitting through the Countdown top 10 on ABC waiting in anticipation for the ONE big game we were shown from the Sydney competition.  All the ‘professional’ Sydney teams had a few Queenslanders in them, we were stoked that the blokes we had followed in our home town had made it to the big time. Until that is, we had the yearly Queensland vs New South Wales game...

This game caused depression at BBQ’s all over the state.  In fact, as a youngster I actually asked my Dad & Uncles one evening why we bothered watching it, NSW flogged us every year.  Well...  I was educated, extensively, on how unfair it was that Big Artie made the difference in that match, we could have won IF he had been on our team, as he should have been.  Needless to say, as quite a few beers had been consumed by this stage, the conversation was actually a lot longer, louder and more vehement than I have described here, but I am sure you get the point.  Basically, this proud Rugby League state were flogged year in year out by our own players.  That chip on the little brother shoulder just kept getting bigger & bigger.

Now children, the NRL have re-written history with their explanation of the “Jewel” in the Rugby League Crown.  The truth is, finally enough momentum built (kudos to QRL & local radio stations who got behind the push) and the bigwigs down south decided to pay lip service to us (as obviously we were a good breeding ground for players) and gave us a game.  A game, where players who were bred in our local competition in Queensland, actually pulled on a Queensland jumper and played for US.

For the vast majority of Rugby League fans in this state that is a game we will never forget.  The arrogant sods from New South Wales, came up for a lark.  They didn’t take the game seriously and Queensland did.  See, we finally had our opportunity to not be the poor cousin anymore, we had our ‘own’ boys back in the fold, remembering what it was to be Queenslanders & represent Queensland.  Artie wasn’t battering our own blokes, he was one of them again.  It was a proud proud moment.  Not just for Rugby League fans, but for Queenslanders in general.  People who could not give a rats about football shared vicariously in the joy of BEATING New South Wales, well in fact, more beating Sydney & it’s arrogance.

Sadly over the years with the influx of foreigners, like Mr Birmingham, a lot of this folklore and pride has gone by the wayside.  See you were not here when tourists from down south paid out on us for being seasons behind in the Sullivans.  You were not here with Joh as supreme leader, enuff said.  To my great despair, pubs in tourist areas will even decorate bars evenly with both Maroon & Blue, so as not to offend any Southerners.  WTF! You know the bar owner is not a Queenslander when you see that travesty!

I will share with you a very personal Origin moment.  When my dad dying he was in a lovely hospital, my sister was home from London, the family was together.  Sadly, due to ‘noise restrictions’, we had to have a muted TV while we sat together for our last Origin.  My dad took both us girls to the very first Origin at Lang Park, it mattered to him and to us that we share that last Origin together and it was not really to be.  To this day my family supports our local community Hospice so that no true Queensland family can be robbed of those special last moments together like we were.

See Mr Birmingham, for us ‘old’ Queenslanders State of Origin has a special place in our hearts.  State of Origin was where we won!  We were not behind, we were the winners, WE as a state, beat the odds.  State of Origin is more than a football game, it is the opportunity to stick it up the arrogant southerners.  Hence the depression when we don’t win and why seven in a row is not enough for us.


“The true Queenslander cares about State of Origin. The ones that don’t are the recent blow-ins or the uppity 'trying to be sophisticated' sorts that really belong in Sydney, sadly some families do have them & are embarrassed about that odd one...”

State of Origin was where we as a state could have pride in being Queenslanders, not just someone’s poor cousin who was behind the times, where you had to leave the state to go to Sydney to be successful.  I feel sorry for the foreigners in our state who don’t understand the pride we feel come Origin time.  If you have any neighbours or family friends who are born & bred Queensland old-timers, buy them a beer in exchange for the “Origin” story.  Not only will it help you understand the legend of State of Origin in Queensland, it will also enrich your life & feeling of belonging in the great state of Queensland.

For the sake of your children’s education Mr Birmingham, please heed my advice ;-)