Yes, I sometimes read & follow News Corp Journalists and will NOT apologise for it! 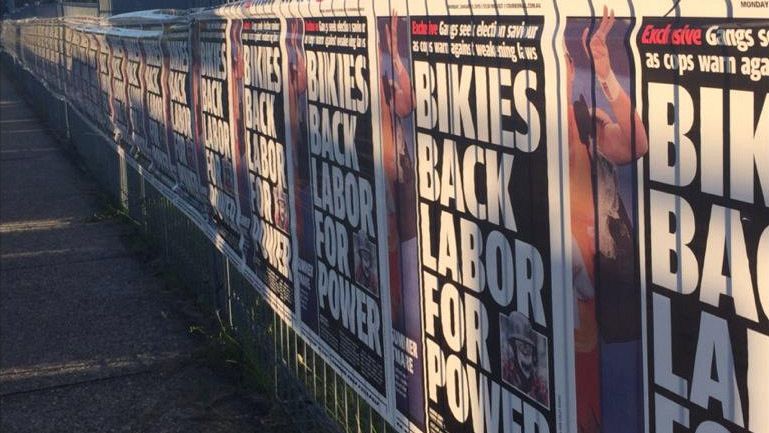 THIS is unacceptable political cheering from the Courier Mail, Qld LNP using said front page as advertising material confirms the bias. My choosing to read particular journalists at the Courier Mail, does not condone the above.

Ok, this one has been building for a while...

*Picks up the Mic*

Yes, I despise what the Courier Mail has done recently. The repulsive LNP cheerleading front pages and fear mongering is not only reprehensible but irresponsible in a democratic society. Of course this is only the most recent in a long line of News Corp obscenities when it comes to trying to mould our society to their ideological – and bosses – wishes and it would take days just to give examples of this thoroughly crook behaviour. Don’t even start me on News Corp’s corporate shenanigans resulting in the massive ripping off of taxpayers in this nation...

Just because I condemn the likes of the Courier Mail does not mean I will punish all their journalists.

Some journalists in the News Corp stable are very professional examples of their trade. Admittedly when you see a lot of the crap that comes out of this media corporation, they are not in the majority but they do exist. In the current publication world, job opportunities for Journalists are actually shrinking. It is not like many of these PEOPLE have the luxury of sitting back and saying, “Well my editor is a dead set dickhead, that’s it for me, I’m putting my hand up and heading over to work at ...”.

These Journalists are PEOPLE, they have families, they have mortgages, pay rent, struggle with chaos of life, just the same as the rest of us. Unlike the rest of us, Accountants for example, they can’t just leave one firm, knowing there are many other firms they can slide straight into.  Even if there were other employment options, the location where they are may suit their family etc., pretty much the same considerations the rest of us have in regard to our employment and life.

I am not trying to embarrass Paul Syvret of the Courier Mail here, though this morning after I tweeted one of his pieces, the response back really pushed me too far and over the edge (especially via DM's) . So apologies in advance Paul for using you as my example for this rant :)

Wot? No riots in Qld, but but #Qldvotes... "Democracy works, even if you don’t like the result." Well said @PSyvret http://t.co/aq0JdesOQS

I enjoy Paul’s writing, I don’t always agree with what he says, though he makes me ‘think’ and I invariably learn something. He is a very experienced Journalist and like a few others at the Courier Mail, one I respect.

As I mentioned in chat, I also despise the odious Gerry Harvey, yet that does not stop me shopping at his store in my town. We have massively high unemployment, the kids have next to no job opportunities and I am sure as hell not going to lead the charge to limit the few they have just because I can’t stand the owner of the company.

The world is not black & white. Same with other media orgs, I may not be fans of their owners, editors, or particular journalists, BUT I alone will decide what I read, on the merit of the work of Individual Journalists, as is my right to do in a free society.

I care about a particular quality of writing that informs me, educates me or makes me think, hell, sometimes just amuses me.

So don’t bother bullying me, don’t bother DM’ing me about my ‘choices’. I know exactly what my ‘choices’ are and I differentiate between the Owners/Editors of a company and the actual Employees who are professionally plying their trade-craft in a responsible manner that informs the public.

I will not punish PEOPLE who unfortunately happen to work for an organisation that I personally can’t abide. It would be cutting off my own nose to spite my face, not to mention, it is akin to the sort of rabid fundamentalism that is not attractive in any sphere of our lives and I will NOT be party to it.

PS: I am sorry if you feel you can't accept my choices, there will be no hard feelings should you choose not to follow me any longer or read my blog. I do neither Twitter nor this blog for popularity and I will not apologise for the choices I make based on what I personally perceive to be merit - not labels - and would hope that even if you don't agree with my choice, your respect my right to make that choice. Thank you.

@davispg Just because the Leyland P76 was a dud car does not mean each driver of it was a crap driver ;-) @YaThinkN