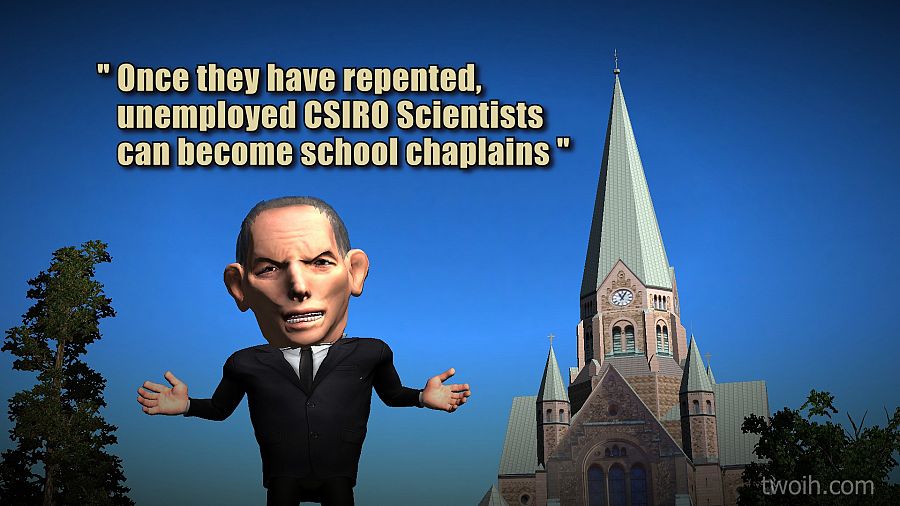 WTF! Australia? Your 'stupid' is showing :(

Where is the outrage over CSIRO cuts? Where is the crossing live to a research facility to get the breathless report on the sacking of hundreds of workers and their devastation about uncertain futures ? Where are the dire front pages as to the Industries that will be hurt by these cuts?

Where is the outrage over CSIRO cuts? Where is the crossing live to a research facility to get the breathless report on the sacking of hundreds of workers and their devastation about uncertain futures ? Where are the dire front pages as to the Industries that will be hurt by these cuts?

Look, I will state right up front, I am clueless when it comes to science, it was my worst subject at school. I am ignorant on lingo and totally at a loss as to what most scientists do. To be perfectly frank, even if the few that I know took the time to explain in detail what happens whilst in that white coat, I would probably not be a hell of a lot wiser. BUT I know we need them.


Judging by the lack of interest - both general media and punters - in the announcement of 900 CSIRO staff getting sacked earlier in the week I can only assume that too many in this nation are just plain stupid.

I don’t mean ignorant, that is understandable and there is no shame in failing to comprehend a lot of science, but being wilfully stupid and just ignoring how necessary science is to our nation and pretty much every aspect of our lives is just plain STUPID, so stupid it hurts.

After much discussion on twitter this morning I don’t know if this lack of interest is due to the fact that these people are Public Servants, and over the years (media and government) have inferred that they are fat cats sitting back in life-long jobs so we have no sympathy for them. Which is utter bullshit of course but too many buy into that lame line of thinking.

Or if it is the fact that it is science sector employees getting the chop and we punters get intimidated by those smarter than ourselves so of course either ignore them as we can’t relate to them? An even scarier thought, in general we are just petty and can cop someone being better at sport than us, hell even admire them, but do we respect someone smarter than us?

Or as Dr Mel (@Dr_Mel_Thomson) said: "I think the average person just sees us as the grown up version of teacher's pets, who made them feel inadequate at school?"

You know... it is fine to ignore or diss someone who ‘lords’ it over you because they are smarter than you, that is an understandable reaction to someone being a ‘tosser’. However, to ignore or trash someone just because you feel intimidated by their intelligence is STUPID. Ever since I sent a tweet displaying disgust at the CSIRO sackings I have had many conversations with some seriously smart boffins and you know what, they didn’t treat me like a moron, they happily answered questions, so if you fit in that latter ‘stupid’ category, well, you are only hurting yourself.

Either way. 900, yes 900 people are going to be sacked. It doesn’t matter what industry you work in, surely you have to empathise with 900, many in niche type jobs now worrying about their mortgages, families and futures? December last year SPC ARDMONA sacked 73 workers and both the media and social media went off its nut. We had breathless live crosses to the factory in hopes of getting an interview with one of the poor ‘workers’ and squeals of outrage from MP’s. In fact, nearly every mention of ‘sackings’ has resulted in massive media exposure, except for CSIRO? Why is this so?

One in five CSIRO jobs set to go

“Combined with the 513 jobs cut in the previous financial year; CSIRO is forecast to cut 1,391 jobs over a two year period ending 30 June 2015  representing a 21.5 per cent cut to the workforce, or the loss of one in five CSIRO jobs…”

Besides these poor buggers losing their jobs - sorry to disappoint you anti-science people, but these people are ‘workers’ too, not well-off boffins living in ivory towers - we need Science. The future of our nation needs science. I am starting to see why our PM did not bother to name a Science Minister when he announced his cabinet.  Just like the ‘Laydeez’, Science is obviously redundant in this particular Government’s eyes wide shut approach.  Guess what, it isn’t.

Science is far from redundant, in fact it is terribly important to all of us regardless of what flavour of politics you prefer.

If you don’t want to get into the nitty gritty of this issue, then take a moment to read John Birmingham’s brilliant piece today “A visionary PM takes on the eggheads”. Got a bit more time and want to appreciate past achivements by CSIRO and why they should be valued, then read “Achievements by decade” and prepare to be amazed, these guys are utter rockstars and you probably don't even know how much you use their innovations in daily life. While you are there pick out ones that you think your friends will relate to so maybe we can wake up a few more Australians as to the damage that is being caused to our future by not letting these people continue to do what they do best.

It would be great if some scientists could speak up and point out the bleeding obvious to us punters so we could get agitated and harass our elected representatives to reverse these decisions, sadly, this often results in the sort of ridiculous attitude I mentioned above “Encouraged to speak up, then called 'precious petals' when we do. That's Australian science”.

I won’t go into how these cuts will hurt our future, as to be quite honest, I don’t know, though I know they will. I rely on those smarter than myself to explain: “Funding CSIRO is vital if we want to future proof our world”. We also haven’t seen media organisations screeching on the front pages, but if you take the time to listen to this Julian Cribb piece on the “CSIRO Cuts" you will also learn more about the ramifications of this backward thinking decision.

It seems the powers that be in this nation can deem it necessary to allocate hundreds of millions of our tax payer dollars to Chaplains in State Schools and Marriage Counselling Vouchers, yet there is no money for Science?

Sorry to sound like a bitch about it, but pretty sure if we have some awful scourge affect our food or health, it is going to be the Scientists who pull our butts out of the fire not the Chaplains, so let’s think about our priorities as a nation? #JustSaying

Please, I urge you, write to your MP’s, spread the word in whatever way you can, we really need a #FriendsOfCSIRO or #FriendsOfScience to get momentum, these CSIRO cuts are wrong! Do we really want to downgrade ourselves from the ‘lucky country’ to the ‘stupid country’?

I must be smart, I KNOW I don’t know everything and need those smarter than myself to keep me healthy, to give me this computer I am working on, hell, just to safeguard me from my own ignorance ;-)

Cheers,
Noely
PS. Thank you to all those who interacted with me on twitter this morning and in recent days, sharing knowledge, links to more information and thoroughly improving my understanding of this issue. There are too many of you to acknowledge here and hey, would probably embarrass you to see your name on a ranty blog like mine anyhow, but thank you :)

Megan’s seven reasons - from Wi-Fi to more than $440 million in royalties earned, this piece really illustrates value of CSIRO
This by Dr Mel Thomson (@Dr_Mel_Thomson) "The knowledge economy needs investment in brainfrastructure" will give you an insight into the hurdles faced.

6.45am 01 Dec 2014: YAY! The lovely Van is going to try to help get some attention to this issue in the media, if you know of someone who can help her to help you, please contact her ASAP as Van Badham is a lady who really knows how to garner attention ;-)

Dear scientists, Let's get your situation attention. Please email me at contactvanbadham@gmail.com (Anon is fine) about what's going on. Xx