Women must stop freezing – for our daughters

Important note from Noely: Please be aware this article discusses many issues in relation to 'freezing' when confronted with sexual harassment. It is understandable that those who have been sexually abused either as adults or children may find the discussion distressing. Please, it is not intended as such and is in no way advocating victim blaming nor passing any judgement on those who have frozen when faced with the situation - as I myself have done in the past. Dry, personally removed from subject style discussions can seem hurtful when read through eyes of those who have suffered trauma, so if that applies to you, please continue with caution, or not at all.
If the issue being raised itself has caused any distress, please seek help via the crisis line in your state, or the National 1800 737 732 (1800Respect) line or Lifeline on 13 11 14.
sincere regards,
Noely

'Women must stop freezing – for our daughters'

The #metoo movement has done much to highlight sexual harassment and has outed some high-profile serial offenders. Yet the USA has an alleged serial offender as President. What does that tell you about women’s place in our western society?

I use the word women inclusively. Sexual harassment does not differentiate skin colour, creed, or ethnicity. Sexual abuse/harassment of children is horrific. Men are not exempt either, as evidenced by Terry Crews. I believe women have the most power to protect not only women, but children and men, through driving cultural/social change. I also stress this is not about changing any specific woman’s response or telling individual women how they should respond. This is about driving cultural/social change.

Women are culturally conditioned to remain silent – this must stop.

Women are conditioned in primarily two ways. The first is social conditioning from cradle to the grave, the second is retaliatory conditioning: the furore that ensues if a woman should have the temerity to actually speak out – or not speak out and have the situation discovered years later. I won’t labour the point here – we all know the drill, not matter which path a woman chooses, she’s wrong.

What I have learned from many on social media recently is this. Many, many women freeze when sexually harassed or assaulted in professional and/or social environments. It is this conditioned response I focus on today. Let me be very clear – I am NOT talking about rape situations where the woman is alone and being threatened with a knife or a gun – that is a very different scenario.

You may recall the Australian Government Domestic Violence ad where the boy slams the door in the girl’s face, knocking her down, and the mother says “You’re OK, he just did it because he likes you”.

I read of an unverified case where a girl slapped a boy at school because the boy snapped her bra strap. This is an unverified story, you can read about it on Snopes. The girl, of course, got into trouble. Same result: boy sees girl get into trouble, boy’s behaviour is reinforced, girl is conditioned to be quiet.

We can see where this is going, can’t we? The next time, the boy tries something a little more daring. Squeezes a boob, maybe, slaps a butt, whatever. The targeted girl may move away, but in many cases will say or do nothing. She has been conditioned, and again, his behaviour is reinforced because there is no retaliation for his action.

There is enough media coverage, consent training courses and so on to educate the young man that this behaviour is no longer acceptable. In his brain he knows this – his belief, his auto-pilot behaviour, however, has been reinforced that it is OK, he can get away with it. It is fun, he gets a power trip out of it. I am NOT saying such a boy ultimately becomes a perpetrator of domestic violence or a rapist: I am only talking about the sort of sexual harassment and abuse that is so common, yet so distressing to so many.

Yep. Boobs grabbed in front of male journos. Politician's tongue forced down my throat masked as courtesy peck. Another's hand run up my stockings hd to be pushed away. Unwanted sidehug so man cld gawk down my top while others watched. So many stories, past & more recent. #stopit https://t.co/ZExvOSg7ut

Maybe some of those men, with continued behavioural reinforcement, do escalate to more serious crimes against women – that is not my focus today.

I remember once I was in a line in a coffee shop. I was touched from behind. I swung around, strike already in motion, when I saw the perpetrator: in this case a very close friend who got the shock of his life. I should stress he was not the sort to do that to just anyone he knew – our relationship was such at the time that his action was perfectly acceptable. I relate this to illustrate I’ve never been a freeze girl or woman. I wasn’t raised that way. I was starting to think I was alone until I read comments from like-minded women on social media.

Sue P on Twitter wrote, “Me too a bloke touched me up at a Bar I turned and slapped his face almost died of fright he was a big bikie type but he got it and he didn’t retaliate.. women need to react let instinct take over we all have that”

Me too a bloke touched me up at a Bar I turned and slapped his face almost died of fright he was a big bikie type but he got it and he didn’t retaliate.. women need to react let instinct take over we all have that

Now, Sue was responding to Meg, who stated, “In discussing this in the office, one really decent fellow could not believe a woman would freeze in that situation. All the women believed that absolutely.”

In discussing this today in the office, one really decent fellow could not believe a woman would freeze in that situation. All the women believed that absolutely.

I’m with the decent fellow, as I would not have believed it either – and I am a woman. Older than a number of the women having the discussion. Theoretically, therefore, I should be more conditioned to freeze than younger women.

Remember it is less than 100 years since women under thirty got the vote in the United Kingdom. In 1893 New Zealand gave women the right to vote. Australia was a bit piecemeal, but by 1902 white women could vote. America lagged, granting white women the vote in 1920 (minorities waited until 1965). Switzerland held out until 1971! Not a long time. I’m 63 – to me, now, 100 years is not a long time.

YES – men helped – after all, men had to pass the legislation to grant women the right to vote. Women could not have won that battle without those men. YES – we do need men to support this battle too, but we need to be very, very wary of attributing to men the same responsibility for their fellow men as Prime Minister Morrison tries to give the Muslim community to police potential terrorists.

Men who do not behave inappropriately are not constantly on the look out for misbehaving men – nor should they need to be. Nor do I want to feel I am going back to a pre-suffrage time when I needed a man’s protection to be safe, free and equal.

Women must stop freezing to be truly free and equal. Otherwise we are taking a backward step.

Some of the evangelical Christians in the USA are making truly horrific pronouncements against women. Japan has been preventing women entering medical school. Australia’s government has introduced ParentsNext, 95% of “clients” are women: it is proving disadvantageous.

Ann Coulter, the right-wing USA “commentator” (rabble rouser is probably a better title) has stated women shouldn’t have the right to vote.

What does all this have to do with sexual harassment? EVERYTHING! It is about women’s place, women’s rights, women’s equality. We got to first base, getting the vote, less than 100 years ago (unless you were in New Zealand). Equal pay for equal work is still an issue. Women's IMPORTANCE is still an issue – women are referred to as a “minority” and that is not an indication of numbers! Dr Ford in the USA speaks out, her life is derailed, she has had to move at least four times and has been unable to return to her job. Kavanaugh? Nah, he’s fine, he’s a Federal Court Judge now, it’s all good.

A man gets killed by a single punch, all hell breaks loose to protect men from one-punch incidents.  Sixty-nine women are murdered by partners or ex-partners – not important, nothing happens.

Women got the vote, but that was only a battle, women have not yet won the war. We won’t win the war unless we fight more battles.

Women must stop freezing – for our daughters’ freedom.

The little girl in the video? The boy should have been made to apologise. The bra strap incident? The boy should have received a detention. Girls need to be encouraged to retaliate to prevent both the conditioning of the girl and the behavioural reinforcement of the boy. Boys should not be given “priority” in the home for any reason. One orange left in the fruit bowl? Half to each child.

I understand that women freeze. I understand how this can have happened. The fact it happens doesn’t make it right. Saying that is not blaming the victim. Accusing me of blaming the victim, as I was accused the other day, is like saying we should blame women for not having the vote before they got the vote, it makes absolutely no sense.

Fighting for CHANGE is not blaming the victim, it is fighting for change. If we had no victims, we wouldn’t need change. We won’t get change by protecting the perpetrators, by reinforcing their behaviour.

This is primarily our battle, our war. Men can, do and will support us, but women must lead the charge.

This doesn’t mean we have to make a police report for every infraction, but we need to all be very clear all the time that we will retaliate.

There are also many cases of young men growing up. They emulate the behaviour of bosses or similar when young, realise the error of their ways and become model citizens as they mature.

Yes! Added.
So very true. I have a mate who used to be a sexist harasser (not physically), just young, dumb, emulating the bosses to big note type crap. NOW, he is a wonderful man, would never cop anyone disrespecting his staff and truly leads by example.

Women retaliating in a timely manner will speed the onset of that maturity.

This is another Australian Government ad. Sums it all up really.

I would be interested in your thoughts on this issue, please feel free to leave them in the comments below 😊 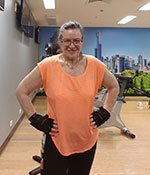 by Robyn Dunphy
Robyn has enjoyed a long career in the corporate world as a CPA and IT professional. In the 1980s Robyn battled her employer for the right for women to be allowed to wear trousers to work. The war continues.
@KoparaFallsKid