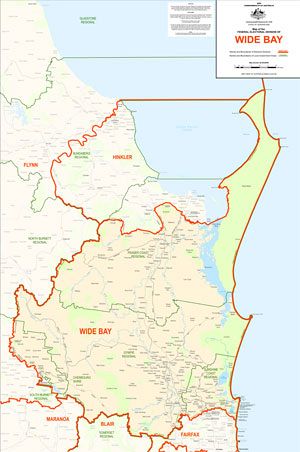 Wide Bay is a bloody big electorate, rural, regional, resort, all in one, abandoned for a long time: http://www.aec.gov.au/profiles/qld/files/2009/2009-aec-map-qld-wide-bay.pdf

I will most likely be voting ALP at this next election. Ok, I know that is an odd thing for me,   I am a fan of Independents & minor parties, I personally feel that they are more accountable to the electorate, their only priority is the the electorate, not their party bosses as happens in the larger political parties.  Noosa saw that very clearly when Cate Molloy was sacked by Qld ALP for representing the overwhelming majority of her electorate who did not want the Traveston Dam.  Obviously this went against ALP policy, so Cate was sacked.  For us in Noosa, that was offensive, surely representing US, the voters, should have been the right & correct thing to do, surely we should have been more important than the ‘party’.  In fact, I have not voted for the ALP since my very first State Election I could legally vote in, and that was to end the reign of Bjelke-Petersen who had been in charge of Qld my whole life.  What happened to Cate Molloy just reinforced my poor opinion of how much political parties actually care about the people in their electorate and what the priority is, not the punter :(

The thing is, I live in Wide Bay, one of the safest Federal seats in the country.  Looking at all the attention that Western Sydney is getting from both parties should be a lesson to the people of Wide Bay, we should not be bitching jealously about it, we should be studying it and learning from it!

Now, I don’t know Mr Warren Truss at all, the only communication I have had with him is at the Meet the Candidate nights in previous elections and I have to say, he did not inspire me.  His attitude about the NBN alone was pretty insulting, as a regional area, he should have been fighting for us to have better infrastructure so we can compete with the cities, Hell, as a National, to borrow a phrase from Mr Abbott, fighting for Rural & Regional communities should be in the “National’s DNA”, in fact, as the Leader of the Nationals, Mr Truss should not be advocating a sub-standard Internet for our region.  If Joh could see this, he would be rolling in his grave.

Joh was an ornery bugger, he would have fought the ALP tooth & nail on the NBN, taken every opportunity to trash them, because basically, that is just the way he rolled, BUT, in the background, he would have been doing deals to make sure that we in Queensland got the benefits of the NBN first.  He might have come across as a doddery old bloke, but he was a cunning man, who – as history shows – always took his ‘cut’ on any monetary transaction in this state, at the same time, he did actually try to improve the state & put Qld first.

Back to why we have to vote ALP...  After asking ALP people on twitter, they don’t bother spending anything in Wide Bay as it is a SAFE SEAT for the coalition.  Mr Truss who has been the MP for Wide Bay actually improved at the 2010 Federal Election with a margin of +10.25.  So basically, no other party is going to fight for the seat, they don’t have unlimited funds, so are not going to waste those funds on a seat they can’t win.  But where does that leave the people of Wide Bay?

Mr Truss was in power with the Coalition for 12 years, nothing happened in Wide Bay, even in those glory days of the last term of the Howard Government when they were tossing out cash left right & centre, Wide Bay missed out.  Since the ALP have been in again, nothing in Wide Bay, times are tough, cash is tight, why would you bother spending any money here when you have no chance to get an MP voted in?

This is the dilemma of Wide Bay that the punters living here just do not see.  We stay a safe seat, we keep getting the same treatment, nothing.  Basically, the only time anyone notices the area is when Gympie floods & the Bruce Highway is cut off.  An article in the Gympie Times “A $1 billion pledge for Sydney roads but Bruce Hwy left out” perfecly illustrates what is happening in this seat.  The LNP Qld Transport Minister is quite proud of trashing the Federal Govt for ignoring the Bruce, but that is seriously hypocritical, as the Coalition have never done anything about it either.  In fact, the area being conservative with safe wall to wall LNP at a state level just worsens the situation for us.

As a small business operating in the Noosa area, I desperately need the NBN.  Friends who live in the rural area of this electorate need someone to seriously look at the duopoly of Coles & Woolworths and how they are screwing over Primary Producers.  We also need someone to stop allowing the cheap asian imports of vegetables that are hurting those primary producers even more.  We desperately need the Bruce sorted out, it is getting ridiculous, both with deaths on that highway & the amount of times it is closed during flooding.  With the high Aussie Dollar, tourism needs some serious help in this area, in fact, in the Noosa area alone the unemployment (particularly youth unemployment) is very high and with TAFE’s being closed and courses being cut back in the ones that have not been sold for their real estate potential, this is only going to get worse.  CSG & Mining worries, crap transport, limited opportunities, flood mitigation, the list of concerns & needs in the Wide Bay electorate just goes on & on...

No-one cares, no-one is listening.  We are not even on the radar.  To get some notice for the issues we have, the only choice is to shatter the ‘safe-seat’ situation.

We either vote ALP and they sneak in, which means even if the Coalition win Federal Govt as is most likely at the moment, they will spend money & listen to us here, as they want their seat back.

On the flipside, if we vote ALP and something ‘Howard like’ happens, a children overboard or a 9/11 and the ALP gets back in, then we will still win, as they will want to keep this seat.

This scenario is a win win for Wide Bay regardless of who wins Federal Government.

IF Katter, Greens & some Independents decide to run in Wide Bay, well, that would be even better, though we can only capitalise on voting for these people if that vote is being taken away from the Coalition, not Labor.  So basically this is your choice people of Wide Bay, we keep seeing articles like that in the Gympie Times for the next decade, as we have for the past 2 decades, or we actually stand, fight back and try to make a change.

I am saddened to have to write this.  I truly believe in Democracy and wish that it didn't matter where you were in this country that your elected representative would actually represent you and you would have a voice in Government.  Sadly party politics does not allow for that, therefore, it is time for we, the punters, to participate in the 'party politics' game to get some action.  As I said, for all I know Mr Truss may be a lovely man, unfortunately my electorate is sliding backwards and has been neglected for too long, therefore, Mr Truss, the Nationals who have abandoned us and their core values, and the coalition who doesn’t even notice we exist, have to go!

I am just a punter, but I am a punter who is sick of her backyard being taken for granted!