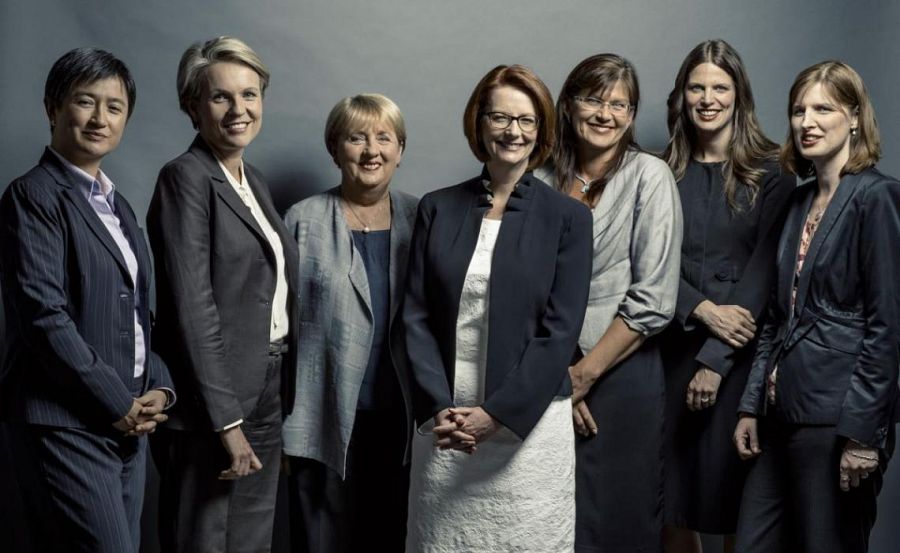 Where are the 'Women of Merit'?

Married, unmarried, Gay, children, no children, minorities... The previous Cabinet, particularly under Ms Gillard, including both women AND men, while not perfect in displaying all facets of the population, was probably one of the most 'representative' of the Australian public that we ever saw, sadly those days are now gone :(

Mia Freedman and ‘legendary feminist’ Eva Cox, two media darlings on all things ‘feminist’ assured me that Mr Abbott meant no offence with his ‘Women of Calibre’ comment in regard to who deserves a lot of money to have time off to have kids in this country, he honestly was not denigrating the vast majority of women who don't earn anywhere near the amounts that some lovely fellow described as "The pretty lady lawyer on the North Shore" earn.

Even just recently, I was advised by the media, again with his Mr Abbott’s lovely daughters adorning him like bling, that his ‘Sex Appeal’ comment in regard to Ms Scott, one of his new MP’s  was not really an issue, was just being a ‘daggy dad moment’...  AND that must be true, I was soooo silly to be offended by that, as Mr Abbott’s daughters said it was ok ;-)

I could probably go back through history in regard to comments made by Mr Abbott, (You can find many of these past comments at ‘PhonyTonyAbbott’), though again, I was told that Mr Abbott has changed since those days and really truly doesn’t have an issue with women?  So... Who is going to tell me now that Mr Abbott doesn’t have an issue with women when it looks like there will be only ONE, yes ONE woman in his Cabinet, the select group in our Government that make decisions in this country that affect us all, even us irrelevant women?

Liberals keep telling us they don’t believe in Quotas for Women and rubbish like that, they ‘promote’ people on MERIT.  Sky News personality Mr Peter van Onselen summed it up pretty well for me, no “Women of Merit” in the Coalition?

To everyone who says Liberals promote on merit, they should reflect on how crap their women must be to only have one of 20 in cabinet...

Worse for me in this situation is that the one woman he has picked, Ms Julie Bishop, is not even the a-typical type female of her age in this country.  Ms Bishop is a seriously professional, some would say ‘hard-boiled’ ambitious woman who thinks & famously said that “women can't have it all” (as in families & careers).  Not exactly the message we want going out to the younger 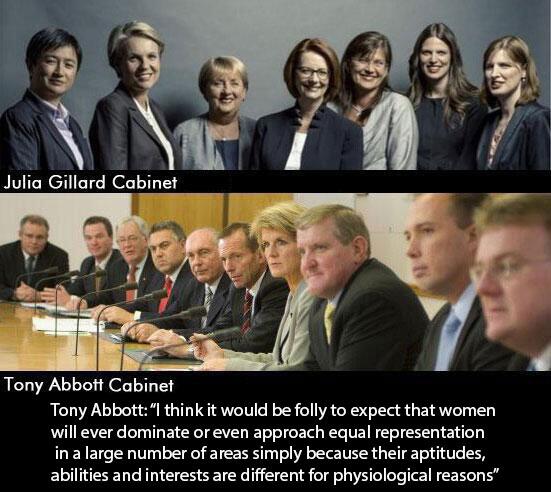 generation of females in this nation, have we not just spent the past few decades telling our daughters that if they worked hard enough they could have it all?

To be quite frank, I also do not like quota’s in regard to females, gays, indigenous, you name it.  Naive I know, but I feel that we should be sufficiently educated enough in this country that equality should be a ‘given’ and there should be no need for a quota system to ensure that everyone gets a ‘fair go’ in regard to advancing in any sector of our society.  Obviously, that is not the case, therefore to ensure diversity in the upper echelons of our Political, Educational, Corporate leadership, we do need to be aware that programs do need to be in place in the lower levels of organisations to ensure that EVERYONE gets a chance to participate and work their way up the ladder, regardless of sex, gender or colour of your skin.  Having these sorts of encouragements means we would not need any ‘quotas’ as obviously there would be enough ‘people’ of ‘merit’ to fulfil our leadership roles.

Having said that, obviously the Coalition does not feel the same way, though what would I know, I am just some daggy female punter?  This worries me.  Mr Abbott as Prime Minister hand in hand with his Cabinet set the tone for the nation.  So what example are they setting?  Women don’t matter?   Women are not encouraged in our organisation?   Women can only succeed in this nation if they are childless?  Women are only necessary if they support you and are pretty to help you promote yourself like a cheap beer?

Never fear, I am sure that the likes of Eva & Mia will come out of the woodwork soon to advise me that I am wrong to feel offended & worried about this state of affairs where half the population of this nation have no role in the leadership of the nation.   As Chris says:

@YaThinkN I'm sure at least Mia is dashing one off now. Eva will take longer cos more n bigger words :-)

Sorry, there are only so many times that I can be told that “Mr Abbott meant to say...”  or you don’t understand “The Context is...”.  I am calling BS now and it will be interesting to see just how many of our esteemed Press Gallery have the decency & self-respect to do the same.  If they don’t, I really do despair for future women in this nation.

Cheers,
Noely
A woman of obviously no 'merit' or 'calibre' ;-) 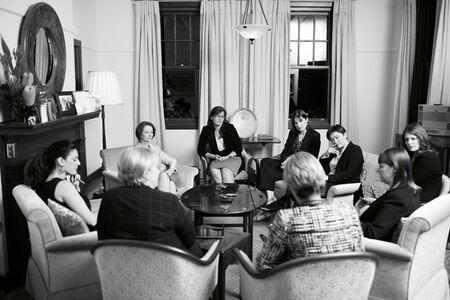 Graphic above:  Penny Wong, Tanya Plibersek, Jenny Macklin, Julia Gillard, Kate Lundy, Kate Ellis, Julie Collins. Photo for The Monthly by Tim Bauer. "Critical Mass", Julia Gillard and the women in cabinet by Anna Goldsworthy, a very worth read in The Monthly.
Graphic to the left: Another photo we won't see again under the Coalition, thanks to Linda White (@LindaWhiteASU) and thank you to Margaret (@Margy011) for bringing it to my attention.

Thanks to @no_filter_Yamba think about this: 02 April 2013 "Women in Politics: Let's reach another milestone in the September 2013 Australian Election", sadly we went backwards :(

You have to love the quick wit of Twitter, the charming 'Liberal Women - Kitchen Bench Not Front Bench' courtesy of Karen (@Bishop64) not one of the favoured Bishop's ;-) 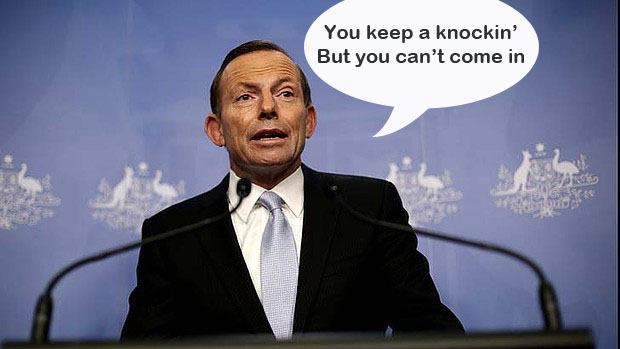 2.30pm 16 September: PM-elect Tony Abbott 'I'm obviously disappointed there aren't more women in Cabinet.'
via @latikambourke "Tony Abbott's first Ministry" So Senators Fiona Nash and Michaelia Cash get 'outer' ministries, but no extra women.  Check out the list, Blokes are running the country :(
Worse Mr Abbott continued his statement with he was disappointed" there were not at least two women in the Cabinet." (referring to Sophie Mirabella), so basically, TWO was the only expectation he ever had!