When did we become complacent and take our eye off the ball? 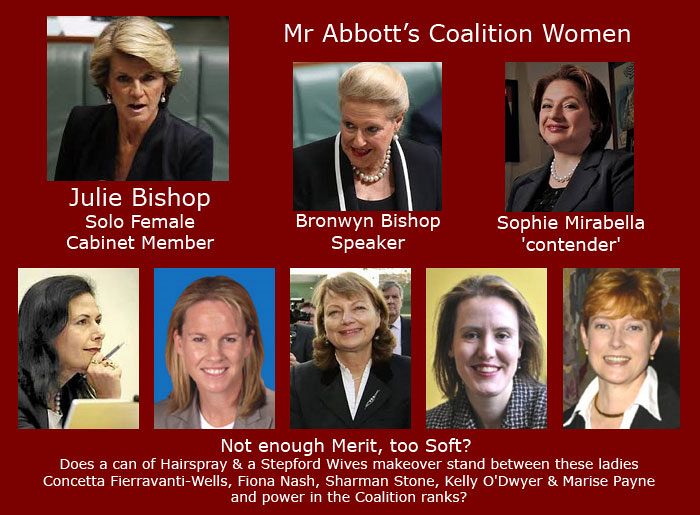 Let’s imagine that we had a Female PM and she had only ONE MALE in her cabinet?

Now that I have gotten that little bit of silliness out of my system, as let’s face it, quite frankly we need to laugh at the ludicrous situation we have found ourselves here in Australia or we may as well just curl up in a ball and cry.

When Mr Abbott announced his Cabinet I was horrified there was only one woman, asking the question here “Where are the 'Women of Merit'?”, I took it further and also asked on Twitter, specifically targeting conservative women with requests as to their feelings about 50% of the population not being represented in our Government.   Sadly most answers came from one of two perspectives, the partisan rubbish that anything that is Coalition is ‘good’, or, more concerning, the “I am sick of the Gender War rubbish”.  This sort of answer truly saddens me.  Since when was expecting an advance in equality & diversity a gender war?

What saddens me more is that there is very little outrage about this situation?  Within 24 hours we had vague comments by the likes of David Speers on Sky which normally started with “The ALP have criticised...” Or a lot of apologist pieces by people more fascinated with the game of politics itself advising us that Mr Abbott “Is showing us a safe, steady, stable ship...”.  The fact still stands that over 50% of this nation is now being represented at the big table by just one woman?

To clarify, I do not think I could in all reality call myself a Feminist.  In fact, until the crap started with Julia Gillard this year, I did not even think of myself as someone who really cared about Woman’s rights as I have been lucky to be in a situation in the last decade where I am not subjected to any discrimination.  I do remember though as a teenager, fuming about the boys school next door to my school being allowed to do particular subjects while we in the girls school were forced to do secretarial studies & typing (Yes Young uns there was once a course called secretarial studies LOL), BUT even as I fumed, I felt assured that in years to come if I ever had a daughter she would be in a better place.  I am sure that my mother probably felt the same as me.  See, that is where the problem is here with our current situation.

Quite a few articles were written, though of course not on the front page of the papers and this paragraph by Jacqueline Maley in her piece 'We thought you knew women Tony, but then you do this' really resonated with me:

We are told that Liberals are philosophically opposed to affirmative action. That's fine, most women don't care for it either. The very term "affirmative action" has a demode '90s vibe to it. But that's because no one has talked about affirmative action since the '90s, Tony! It's like harem pants and high-waisted jeans! We just didn't think we needed it any more!

Since the bra-burning heyday of Women’s rights waned, there has been an inherent understanding in the community that even though we may not truly be equal, it is improving, it will keep improving and we are working towards the day when Men & Women do have equality.  These improvements may be incremental, they may not be fast enough for some, but a quick look through history shows that in most sectors of our society the amount of women leading or participating in leadership roles has increased.  Until the 16th of September 2013 that is, for the first time women took a massive leap backwards and as far as mainstream news goes, it has been pretty much treated as a passing commentary instead of the equality disaster it actually is.  There has been very little discussion as to how did the Coalition get to this situation?  The favoured feminist talking heads of Mia Freedman and Eva Cox seem to be AWOL (or if they have been making comment I have missed it).  Where are the feminists?

Quite frankly this is a national shame for us.  I disagree that Mr Abbott could have not had a few more women of merit tossed in, as per my tongue in cheek graphic above, and like many women, I would hate for women to be promoted just to make up numbers, BUT, I would like to see some outrage in regard to this situation, I would like to see some very very serious discussion & condemnation of the Coalition as to what went wrong with their party culture to allow this situation to get to here.

Just imagine if this nation was 50/50 Indigenous & Caucasian?  Would we not have riots in the street if a ruling party had only ONE Indigenous person in cabinet?  Would not we be treated like South Africa was during the Apartheid years by the rest of the world?

Alternatively, let’s imagine that we had a Female PM and she had only one male in her cabinet?  Businessmen & Conservative parties would be hitting the solicitors with discrimination claims as fast as their fingers could hit speed dial?

Women have been patient, we celebrated the incremental increases in participation but obviously we were complacent too.  If we were not so complacent and trusting that this would keep increasing we would not have been caught by surprise with this kick in the teeth.  This has to stop now! 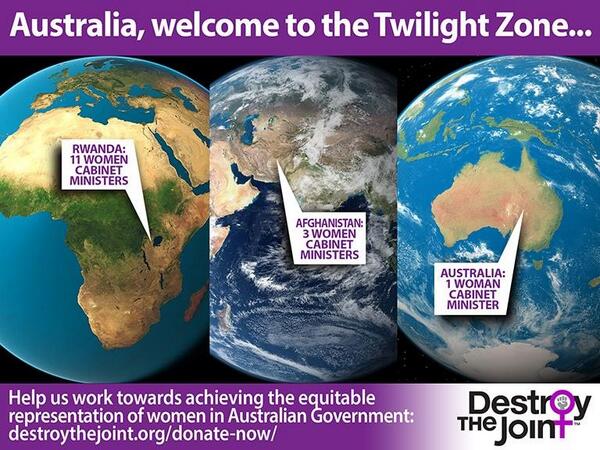 All the talking heads agree that Mr Abbott played a smart tactic keeping his safe stable Cabinet to balance the chaos he whipped up about his opposition during the past 3 years.  Well that is lovely, kudos to Mr Abbott, well played, BUT what about moral & ethical responsibility to Women?  What about the fact that Mr Abbott has basically disenfranchised over 50% of the nation?
Where is the condemnation?
Where is the soul searching?
Where are the frantic statements from the Liberal & National parties in regard to how they are going to improve female participation in the political process?
Where are the ‘real’ feminists on the morning shows & news shows decrying the state of the role of women in Australian politics?

Every female regardless of political persuasion should care.  Every male who has a wife, sister, mother, daughters should care.  If this situation is accepted as it has been it is a very slippery slope.  How the hell can we as a nation be enlightened enough to accept equality as the norm for the minorities in our country if we can’t even fight for equality for the group, women, who are in fact a dash over 50% of population of Australia?

Noely
OMG! I thought I was being silly with the Hairspray on the graphic, guess it is actually a 'Thing', according to the esteemed Australian :(

'For those Lib women wanting to be promoted to the inner circle, it could be as easy as more hairspray.' ACTUAL STORY http://t.co/m8lZrFmfhL

I guess the following article explains exactly the sort of attitude that has resulted in no-one caring about half our nation being disenfranchised FFS!
Oliver Milman Wednesday 18 September 2013 14.11 AEST "Coalition sources blame Cathy McGowan for lack of women in cabinet"
Jeff Sparrow 18 September 2013 11.32 AEST "How Tony Abbott defeated liberal feminism"
Robyn Oyeniyi 19 Sep 2013 "Where, oh where, are the women of calibre?"
Isabella Mason "Tony Abbott: Remove Yourself As Decision Maker for Women's Affairs and Indigenous Affairs and Find Appropriate Leaders"