WE buy your papers, so give us a little respect! 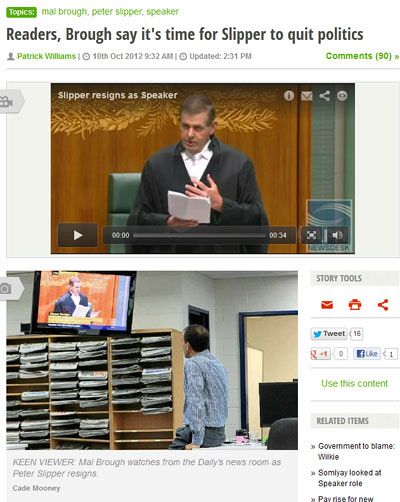 Regional areas rely on National media to ensure that we get a very full picture of what is happening in the Nation and the World.  Living in a regional area can be great, more relaxed lifestyle, awesome place to bring up a family etc., the flipside is that you are limited in choices and it can be easy to become a big fish in a little pond.  If the power being wielded is good, than that is not a problem, unfortunately when you're the local newspaper and the big fish too long it can be detrimental.  Obviously there are area specific issues when you are the only show in town, you can’t go too hard on say Council or sitting MP’s as they may not talk to you at all or give you no access which means you have nothing to report?  On the other hand it can also mean that when you ‘go after someone’, there is no-one else to in the region to give an opposite view, this is what is happening on the Sunshine Coast at the moment.

Our local paper has been onto Peter Slipper for years.  Invested time and money into Travel rorts and the like.  At some stages it has been almost fanatical.  As Peter Brent in the Australian commented in his article “We can all dream” on the 19th of December “But Slipper is no ordinary sitting MP. He has a negative personal vote. Between the 2007and 2010 election his local rag the Sunshine Coast Daily went after him about entitlement transgressions. They went hard, and they were effective.”  This is very true, look at “Topic: peter slipper” in the Sunshine Coast Daily and you will see how long and hard they have been chasing Peter Slipper.  Even though the man has not been convicted of any wrong-doing the average local now thinks he is the biggest crook in the state?

Often while prosecuting their case against Peter Slipper in the public eye, Mal Brough was called in to ‘give comment’.  In fact, just looking at the photo on the day Slipper resigned in their report “Readers, Brough say it's time for Slipper to quit politics” is rather telling...  Caption “Mal Brough watches from the Daily’s news room as Peter Slipper resigns.”  I am not a journalist, though as a punter, am very uncomfortable with the fact that Mr Slippers opposition in that seat would be sitting in the papers newsroom with them?

I never expect the National media to take an interest in Regional affairs, obviously you want to get a bang for your buck, and that is not going to be achieved by looking at regional issues, unless they are of National Interest.  Hence my surprise when the National media, after sticking to every twist & turn in the Slipper saga like poo on a blanket, suddenly went dead quiet when the Rares Judgment came out?  I would have thought the following Item 37. In the judgement would have had them frothing at the mouth?

Item 37. Mr  Ashby’s references to “empowering others”, and “national decisions”, were concerned solely with the political consequences of what Mr Ashby was contemplating. Those consequences could affect the balance of power in the House of Representatives, depending on whether Mr Slipper could remain as Speaker if Mr Ashby used his “power” and what effect that use would have. That was because the Government did not have a majority in the House and was reliant on cross bench support, assisted by Mr Slipper having ceased to be a member of the Opposition and not being able to vote while Speaker, by reason of s 40 of the Constitution, unless the votes in the House were tied.

Now this is not some MP with a political axe to grind stating the above, it is a well respected member of the Judiciary.   As I stated in a prevous blog post "Where is the #Ashbygate Outrage?" "Slipper may or may not be a slimy ineffective dill, but like the others in Parliament we don’t like, WE the public voted these ineffective dills in and WE will vote the ineffective dills out."

But even with this scathing Judicial response there was nothing in the media?  Then on the 23rd of December it was reported “ALP calls police on Mal Brough scandal” and I was hoping we would learn more.  Again, nothing!  Even ABC24 waited until hours after the article appeared to even mention it and when they did, they already had a pre-filmed response from Mr Abbott?

Now, I know many are going ballistic on Twitter about #AshbyInquiryNow.  From odd disparaging comments I have seen from journalists on Twitter, they just assume that Labor hacks are calling for it.  Well, you're wrong!  Not all of us are?  I live on the Sunshine Coast, there is no one here who has the resources to look into this issue like a major paper does and it does need to be done.  The reasons why Journalists have a job is to write for papers or television for the ‘public’.  We purchase your newspapers, We watch your News reports giving you ratings, We read your news articles online generating page view advertising revenue for you.  WE are the public!   Without us, you are not paid and don't exist!  I sincerely hope the silence is because it is a tricky situation now after the legal judgement, appeals, and potential AFP involvement?  To think otherwise is just too horrifying a scenario.

This is of National concern.  There is a candidate here who could potentially be a sitting member of Parliament in the near future who has very very serious questions to answer?   Liberal, Labor, Green or even bloody Purple, irrelevant, the people of the Sunshine Coast need to have some answers, at the very least, they need some questions asked and judging by the previous photo we can’t rely on our lone paper here doing it for us.  Some comment from the national media would be nice, even if it is simply to let us know that you are looking into it?  For all we know, Mal Brough may actually be totally above-board here and the lingering questions are now hurting his reputation?  On the flipside he could be involved in one of the biggest scandals in Australian Government history?  Either way, please, WE buy your papers, so give us a little respect!