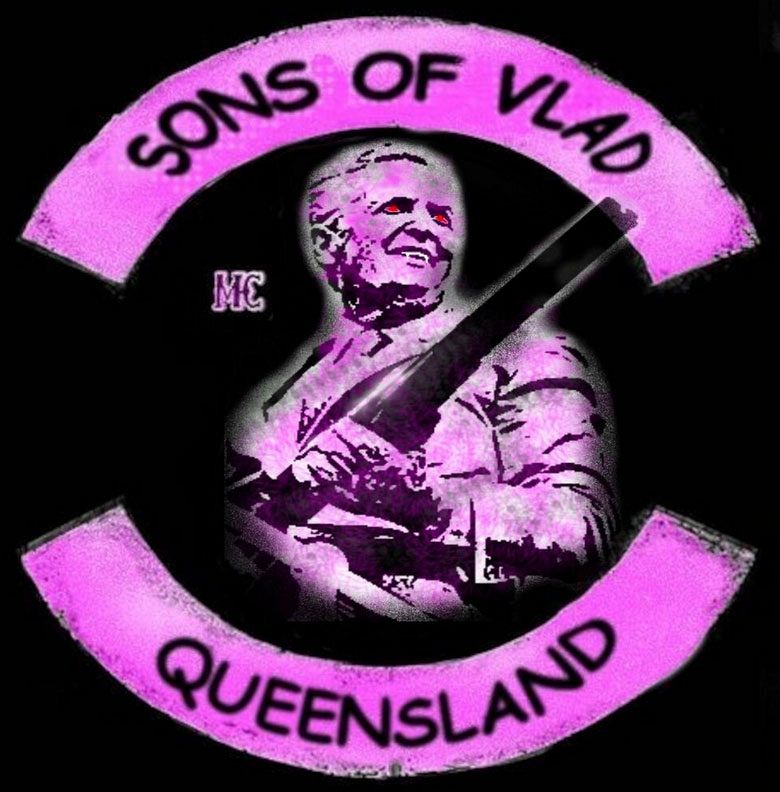 #VLAD Look over there... Bikies!

Friends, Australians, Country-Person’s where is your VLAD outrage? Warning: This rant contains the mangling of famous sayings & serious dripping sarcasm ;-)

Friends, Australians, Country-Person’s where is your VLAD outrage?
Warning: This rant contains the mangling of famous sayings & serious dripping sarcasm ;-)

Do you remember the movie 'Minority Report'?  Not really up to the standard of what Philip K. Dick envisaged with his writing, though it had Tom Cruise involved, so what do you expect?  Anyhow, that is my issue for another day...  Getting back to the point, Minority Report was basically where the Government & Police had worked out a way to ping you for a crime you have NOT even committed YET.  Three all seeing ‘precogs’ decided a particular person was good for something in the future, so rounded them up and dealt with them.  As you can imagine, this scenario led to abuse of that power and the wrong reading of ‘why’ a person is likely to commit a crime in the future & more.

Don’t know the film nor short story?  Not into Science Fiction so it is not familiar to you?  Visit Queensland.  This scenario has in its simpler form become a reality for us with the draconian “Vicious Lawless Association Disestablishment Bill 2013”.   Yes, if you are not a Queenslander you read that right.  This wonderfully named legislation is what the brains trust in George Street led by our esteemed & God fearing Attorney-General and Minister for Justice, Jarrod Bleijie MP have inflicted upon us.  Though in fairness to the Honourable MP for Kawana, it was probably a highly paid Spin Doctor consultant who actually came up with that zinger of a handle.  Anyhow, us cool kids in Queensland who are down with the whole Vicious Lawless Association Disestablishment Bill 2013 just call it #VLAD – as cool kids are wont to do ;-)

Now, I am not a fan of Wikipedia & don’t normally direct anyone there, though in this case I do urge you to look up Mr Bleijie and toodle down the page to ‘Career as a lawyer’.  Don’t worry, it won’t take you long to read, in fact may take you longer to click on the link and bring the page up then to actually read the two (yes, 2, my friends) lines there describing his illustrious career in the Legal profession which so obviously made him eminently qualified to be the top law-maker in the great state of Queensland.  VLAD itself no joke.  It is a very scary piece of legislation that Legal Experts & Civil Libertarians are worried about, with good reason I might add.

VLAD supposedly is here to save us Queenslanders from the scourge of bikies.

Now this is where it is important to other Australians, so don’t be thinking “who cares, they are odd in Qld”.  The other Premiers are watching Qld very closely and if High Court challenges don’t work, well I would not bother laying any money on the odds that the other states will be implementing VLAD as well, as even Tom Waterhouse wouldn't bother with odds that short.

Queensland has had a number of violent bikie incidents, from the ‘Shooting at Robina Shopping Centre’ -or as the media affectionately refer to it the ‘Bikie Bloodbath’ – to the recent ‘Broadbeach Bikie Brawl’, so considering the great state of Queensland is infested with these Bikies and you or your loved one could be the very next victim of these crazed felons, VLAD is a real winner in the tough on crime stakes that the QLD LNP are so proud of. 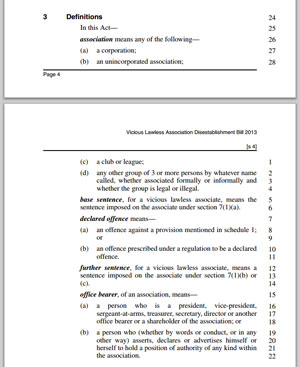 The problem is, no matter how much CanDo & Boy Wonder like to promote, “If you are a law abiding citizen you have nothing to worry about”, this is utter BS.  Unless I have missed it, the actual legislation does not in fact specify bikies only, pretty much any club (or group for that matter) that the Qld Government deems undesirable can be targeted by these laws.  Don’t believe me and can’t be bothered reading all of the legislation I linked at the beginning of this rant?  Then just click on the graphic to the right here & I have made the ‘Definitions’ nice & big for you.  No Bikies, nope, pretty much any group of 3 or more, so watch out you housewives who have the 'raging Book Club' nights and get too rowdy discussing George Orwell's 1984, these laws could be used against you?

OK I am being silly there, obviously if you got too rowdy the Honorable Mr Bleijie wouldn’t sic VLAD Laws on you, the simpler “Police Powers and Responsibilities and Other Legislation Amendment Bill 2013” will be sufficient, let’s not get carried away here - Or as we super cool kids in Qld like to call it, the “Fun Police” law, but that is a rant for another day (hint, even the IPA’s uber Freedom ‘fellow’ Chris Berg is not a fan.
(As an aside, wonder why Chris didn’t get the UNHRC gig instead of Tim Wilson, again, something for another day...)

The Honourable MP Bleijie has been a very busy boy in the past 12 months, there are many new laws we could discuss that are his brain farts, or as his old boss refered to him “Nothing like removing judicial discretion eh JB? And your very own star chamber to boot?”.

So us dumb punters in Queensland don’t take our eye off the ‘hard on crime’ ball, there have been a myriad of other laws, too many to list, who accompany the likes of VLAD to make sure those damn Bikies are tracked down & eradicated.  We won’t worry about the little fact that Bikie Crime is a drop in the ocean compared to say... ‘Domestic Violence’, who’s advocacy groups (and some police who will comment off record) would love just a fraction of the funds & resources that are going into the Bikie War :(  @bettsie2u has written a good piece on this & with her knowledge in the Domestic Violence arena, I suggest you read “We’re Dying To Be Heard” as even if you are not a fan of civil liberties, the waste of funds on VLAD instead of being used on REAL crime should be addressed.

Back to VLAD...  The latest pin-up boys are the #Yandina5.  In a nutshell - 3 blokes in their thongs, t-shirts & boardies (no patches, refer to legislation) who got pinged at the Yandina Pub having a quiet beer.  They are supposedly Rebel Bikies & most likely are, though as per my first reference to Minority Report, they have not been charged with a Crime (as in real crime, not a 'Bleijie' crime) at all.  They are charged for ‘associating’ as per VLAD.  Other VLAD accesory laws are also being used to really make sure these boys suffer while they await bail (another contentious issue).  Local Independent MP Mr Peter Wellington, a pretty good bloke with a good 'representation' track record,  was not a happy camper yesterday when bail was being decided for the #Yandina5, in fact, you could quite cheerfully call his Tweets pretty feral.

@brisbanetimes Death of democracy in Qld - Jailed for having a beer with family & mates - 23 hrs in solitary- disgraceful.

If you have the time, have a toodle through Mr Wellington’s last 24 hours of tweeting, bear in mind @pwellingtonmp is an MP, so pretty familiar with what is happening in Qld Parliament.  Considering Qld does not have a pesky upper house to rein in abuse of power in Parliament, it would be nice to have the non-partisan PCMC (Parliamentary Crime and Misconduct Committee) who oversee the CMC, have a good hard look at this?

Oh Wait... that is right, our esteemed Premier, the Honorable Campbell Newman (CanDo to the cool kids) sacked them!

Call me paranoid if you will, though I am child of the Joh years my friends and this means that every law change I see, I judge by that experience.  Ie “What could Joh & his cronies have done with this law?”  If the answer is:  “Bloody Hell, Joh would have had a ball with this law”, then it is not a good one, in fact, it is most likely to be open to abuse, regardless of any so-called good intentions (whether heart-felt or cynical PR BS) by a current OR future Governments.  I felt that way when the US came in with over-reaching laws after 9-11 & well... ‘Snowden revelations’ anyone?

With the ‘loose’ way this legislation is written the opportunities for the Queensland Government to whip out VLAD & give it a whirl are endless...

Do you honestly believe that the likes of Mr Brandis and other State Governments are NOT keeping a very close eye on the success of VLAD?

If you are a Queenslander & you are sweet with Bikies being shut down like this, please at the very least educate yourself, then decide if you really are willing to accept a potential abuse of VLAD as the price to pay for this Justice Crackdown?  If so, then fine, at least you are aware of the consequences and not just conned by the “Look over there...  Bikies!” hyperbole much loved by both the Government & Media (particularly the Courier Mail UGH).  You don’t have to agree with me, though please, at the very least make sure you go into our minority report style future with eyes open, you never know, it could be your teenage son caught up in VLAD’s snare should the Government decide teenage kids on the street after sundown are a menace?

Queensland, Beautiful One Day...  I will let you finish that famous tourist line ;-)
Cheers,
Noely