Not the movie, the wonderful Tomorrow series written by John Marsden, where Australia was invaded but we never knew or were told who exactly it was that invaded us. Today’s coalition press conference was a bit like that, following on with Mr Abbott’s invisible theme, we are being invaded by a group of faceless people, who we need to take military action against.

Not the movie, the wonderful Tomorrow series written by John Marsden, where Australia was invaded, but we never knew or were told who exactly it was that invaded us.  Today’s coalition press conference was a bit like that, following on with Mr Abbott’s invisible theme, we are being invaded by a group of faceless people, who we need to take military action against.  After Julie Bishop’s, Scott Morrison’s & Mr Abbott’s form in recent times regarding international relations with our neighbours we can only hope that much of this advice is invisible too and this plan never gets off the ground.  Basically the scare-mongering and fear hyperbole has hit critical mass in this country.

Many people I converse with regularly were shocked and horrified by the PNG solution PM Rudd tossed out on Friday, I was not the lone ranger there.  What we saw this morning from the opposition seriously put me in the Twilight Zone.  Today Australians were basically informed that under the Coalition we would go to war against Asylum Seekers with “Operation Sovereign Borders” (good précis here if you missed it “Tony Abbott to put three-star commander in charge of military-led border protection campaign”)

Since when was this country in state of “national emergency” for hells sake?  I am sure there are an awful lot of nations in the world who really do know exactly what a national emergency is.  What Australia is experiencing with an increase in Asylum Seeker boat arrivals sure as hell is not that.  A Humanitarian Emergency maybe, National Emergency invoking fear, sorry, that suggestion is just reprehensible. 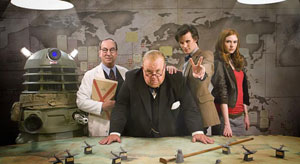 If you did miss the press conference, I urge you to view it (is included on that link above), as Mr Abbott & Mr Morrison came complete with Retired Army Major-General Jim Molan to spruik the campaign,  (I won’t even bother going into how inappropriate I feel it is, that an ex armed forces member is campaigning and lending authority to this press conference). Mr Morrison had a lovely power-point presentation to back up his “military led mission” points.  It was so surreal I was envisioning Winston Churchill moving little ships & planes around on a war board with his long pointer - OK I will admit it was the scene from Doctor Who, but you get my drift ;-) - the whole scenario is actually that bizarre.

Thankfully before we all started to build bomb shelters to save ourselves from the Coalition should they get in and have access to the military toys, General David Hurley tweeted...

Contrary to media reporting I have not provided advice or recommendations to the Coalition on asylum seeker issues.

In my last post I actually included a tweet from Peter van Onselen who said "Rudd has just out Abbotted Abbott", and I agreed, I did not think that even Mr Morrison could come up with a harsher, meaner plan than the PNG solution.  Of course he did, I should have not been surprised.  After pissing off the PNG Prime Minister by misrepresenting him (let’s not forget earlier doing that to the Indonesians as well), it looks like the Coalition are going to wage war in our backyard.  Towing back boats (only Sri Lanka was mentioned, obviously Mr Morrison has a deal there maybe?), Turning Back boats and stuff the consequences, and a lot of waffle about a “military commander with a three star ranking who reports directly to the Immigration Minister "streamlining" decision-making on border security”.

Scared yet?  Some poor bloke in the armed services will be reporting directly to Scott Morrison if the Coalition gets into Government?  You can only imagine how hard-line Mr Morrison would be as boss?  Personally I already find the man to be a raging racist, but then again, to mangle a famous saying “Racism is in the eye of the beholder”, sadly the good people of Cronulla vote him in so they don’t see it, will let YOU  make of that what you will?

Malcolm Farr probably summed up how crook this whole Boat people beat-up has become with “The boat debate shifts to a war footing” and I have to agree with his comment:

Sad to admit, though as Ed Butler so succinctly points out in his very good wake up call piece “This is what Australia wants”, political parties invest in focus groups etc., therefore both parties have been told by the public, we ourselves, that kicking the poo out of Asylum Seekers in the hardest possible way is a vote winner.  I don’t know where this  starts or ends, as I have recently lamented, I am just one of those dumb punters, but I cannot believe at this very moment political talking heads of all flavours are sitting in TV studios & Newsrooms around the nation seriously discussing these ludicrous military options (I am so thankful my grandfather is not around to see this inappropriate use of military force).

Not all the military are as gung ho as Retired Army Major-General Jim Molan and we can only hope that the likes of the eminently sensible and forward thinking Lieutenant-General David Morrison with his now famous quote “The standard you walk past is the standard you accept” is the future of our Armed Forces, not the likes of Molan.  Sadly it seems that beating up Asylum Seekers is the ‘standard’ that Australians want, or quite frankly, our politicians would not be doing it.

There is a big difference between having our Navy help a distressed boat at sea and actively setting up a very powerful stand alone military structure working outside the normal boundaries of our armed forces.  This is a very very slippery slope Australia.  One minute we are turning a boat back with armed force, next we are taking pot shots at it to scare it away?  Towing it back to foreign countries weaker than ours & dumping in harbours?  Aiming to become the bully boys of the Pacific in South East Asia?  This Coalition have already proven that they don’t care about insulting the likes of PNG or Indonesia, what the hell will they do if they get in power and have the keys to the arsenal?  Diplomacy is an art and as I said a while ago, if Tony Abbott is actually PM he won’t have a tame media overseas (like he does here) to explain ‘what Tony meant to say was...’ every time he stuffs up & insults a nation.

After the Single Parent screw over and then the PNG solution, I really did not want to vote ALP, my local candidate being the best person for my electorate was the saving grace I had for my conscience, BUT, I swear, I am now a firm believer in the "ABA" (Anyone But Abbott) party, as the ‘sainted’ Mr Howard who’s reign is lauded and trotted out at least twice in every Coalition Press Conference once said “Be alert, not alarmed”.  At the time he said that, pretty much anyone who was not a panic merchant had a lot of fun with those fridge magnets, not so much now...  That warning was so supposed to be about foreign danger, not home-grown, xenophobic, right wing nutters.

While these types had aspirations of leading the country I was “alert” to it, now they want to play silly buggers with the military, I am bloody ALARMED!

Mr Abbott was right about one thing today in his press conference, we do have a "National Emergency", it is the very serious concern that this country could be run by him.