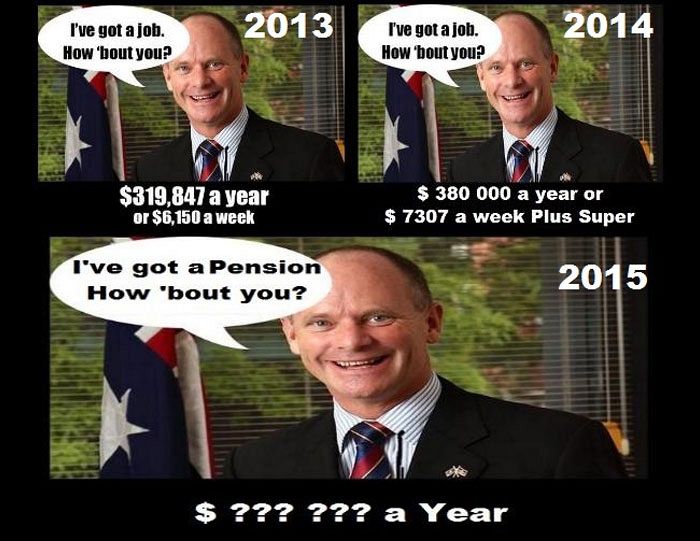 The Queensland Government is just taking the piss now!

OK I am calling it! The pay rises for Queensland Government politicians is bullshit! I understand that politicians need a decent pay. What I don’t understand after watching the news & reading papers around the traps how over recent years we keep hearing these comparisons to “commensurate remuneration with private & business sector”? CEO’s & upper management get a shit-load of money so our pollies should to? Why?

Warning: I am seriously cranky & use some ripe language below, sorry, but, really really cranky!!

OK I am calling it!  The pay rise for Queensland Government politicians is bullshit!

I understand that politicians need a decent pay.  What I don’t understand after watching the news & reading papers around the traps this morning, is how over recent years we keep hearing these comparisons to “commensurate remuneration with private & business sector”?   CEO’s & upper management get a sheadload of money so our pollies should to?  WHY?

A. None of us are really sure what the parameters were of the ‘Queensland Independent Remuneration Tribunal’?  And... B. Were the tribunal asked to make the remuneration in line with business standards?  If so, let’s not even get into the discussion of how exorbitant Executive Remuneration is in the last 20 years is so far out of whack with wage increases in this nation.

I guess what I am saying is... are these so called ‘fair & independent’ people making a ‘fair’ decision based on their own business & government experience?  Don’t get me wrong, I am not dissing the 3 members of the tribunal, they are experienced business people, but to compare politicians with business people is not actually comparing apples with apples?

Politicians are NOT employed as businessman, board members, CEO’s etc, they are elected members of society.

Some politicians in a prior life may be one of the above, fact is, once they hit politics it is a whole new ball game.  Their electorate does not give them the nod because they used to sit on a board?  In fact, most of us would not like our representatives to come wholly from that segment of our society as we would definitely not have a well rounded representation of the public in Parliament were that the case.  We already have enough Lawyers, UGH! Don’t even start me on how we have too many of them representing us in all levels of Government, though, having gone off on a tangent, it does make you wonder how, with the plethora of lawyers in Government that one of the least experienced gets to be the top legal eagle in Queensland?  Anyhow, rant for another day...

Back on track...  A community elects a member to Parliament who ‘back in the day’ they thought would represent them and their interests in Government.  Sadly, nowadays it is more likely that the MP who gets in will be he who had the best support from a political party and the big bikkies to promote them, though again, that whine is for another day.  What I am getting at here is that MP's could come from all walks of life, a mum, a nurse, a specialist, hell, one of the recent rookies, Neil Symes member for Lytton was a deli worker at Woolworths prior to the 2012 Queensland State election.

Not that I actually have a problem with Mr Symes, seems he was involved in a number of community activities and was working towards being in the profession he had studied for, so good on him.  I want all sorts of people in parliament, not just the same well groomed, well spun talking heads.  More variety in Government is sorely needed.  How can you represent the ‘people’ when so many MPs have no experience of the more common professions of ‘the people’.  More plumbers, nurses, teachers, mums, artists, you name it are sweet with me, but they don't deserve an executive pay.

If you are higher than a backbencher you are getting an even sweeter deal.  Sadly the point is, regardless of the gig that the Premier may give one of his MP’s, they don’t get that higher paying gig because they have gone to University to get a Masters in Politics for it?  They don’t get that gig because they have spent 20 years working from the ground up to be in that position?  They don’t take chances, moving from position to position, studying part-time, working phenomenal hours to rise to an executive position?  Most times they get the higher paying gig off the Premier because of some weird calculation between factions, donors, PR, marginal seats etc., It really has very little to do with skills accumulated over time, nor experience to actually do the job at hand.

Therefore, as our politicians do not have to have the same experience or skill as a CEO or Senior Executive, they should not be paid the same either, not even bloody close!

Seriously?  Public Servants, particularly upper level ones get paid a lot of money.  In most cases I don’t begrudge this as they are the ones that normally (except for the odd mate appointed like Michael Caltabiano) are highly qualified for the positions they are in.  They have worked for decades to run these departments & make decisions.  These are the people who actually deserve their higher pay packet, they are the ones who are really running massive organisations with thousands of employees and know how to read a spreadsheet without a spin doctor over their shoulder pointing out the pretty figure they have to repeat in the media.  These people deserve more money than politicians in the vast majority of cases as they will still be doing their particular job long after the latest pollie has plonked his old fellow in a wine glass & slunk back to private practice.

In fact, for many of these bright sparks in Government this will be a three or four year gig only.  Some like Scott Driscoll couldn't even last one year, does he still get his pay rise back dated too?

Even our Premier, who, if everyone would like to remember is a first term MP in Queensland State Parliament, could find himself with the dubious double header come next election of being a One term MP AND One term Premier if polling in his seat of Ashgrove continues to go downhill.  So tell me?  Why should my taxpayer funds pay a bloke who took a punt on trying to lead the state for a few years, the same amount of money that I would pay someone who has focussed on building a business career, with all the skills and experience that entails, over many years?

This current Government has changed Queensland Law at the drop of a hat whenever they feel like it?  They have the numbers, they can do what they like and have revelled in doing so.  For the Premier to stand there and sprout that he can’t do anything about it as it is an Independent decision is utter bullshit!  I don't want to pay any of our Queensland Government MPs more money.  I don't care what party they belong to, how long they have been there, whether they are nice or dodgy is irrelevant to me.

Campbell Newman did not spend the last two decades working up the ranks of the business world to deserve a business style wage? As a taxpayer in Queensland, I find it appalling offensive that I have to pay $379,562 per year to some bloke who got parachuted into State Government as Premier due to smooching up to National News Breakfast shows during the Queensland Floods?  Would have been nice if the likes of Kochie had even once looked into the fact that we were on a ‘disaster’ footing and the reason Campbell Newman (who was Brisbane Mayor at the time) had so much time to talk to him was because he wasn’t even really running the city & he sure as hell did nothing to help bloody Queensland.  So a bloke the LNP thought already had the background PR set up & running to win an election gets the top job!  Well done, maybe that $379,562 should go to the LNP strategists?

Politics in the vast majority of cases is a short-term gig, requiring limited skills & experience.  Yes I know there are the odd politicians who are actually talented, ethical, professional people, in fact, I have met a few, but let's face facts, most are not.  As it stands, a lot of high profile business executives don’t deserve the exorbitant remunerations they get and as for our politicians, they sure as hell don’t!

When the day comes that you go to University to do some magical political degree, then go out in the world & have to practice that for a decade or so, keep educating yourself as you go along, start at the bottom of Government and work your way up to be the Premier, THEN I will be ok with your outlandish pay as at least you will have worked your way up to that position, like the rest of us have to do in the real world or as per the so-called esteemed businessmen you like to compare yourselves to.

All you MP’s get a better than pay than most as it is.  You pay for next to nothing whilst you are in the job. You get all sorts of perks.  You make connections to ensure you are sitting pretty after your limited MP gig is over.  To try to get even more money in the form of a wage is seriously just taking the piss!

What say you?
Noely

Thanks to Arthur Rennick @Joffre2000 for giving me a heads up on "Switzerland has stood up against excessive executive pay – your turn", which is a great piece displaying that even in that garrison of money & business, Switzerland, people are not happy with what Executives are getting, shame we in Queensland can't enforce a similar vote with our elected Government representatives :(