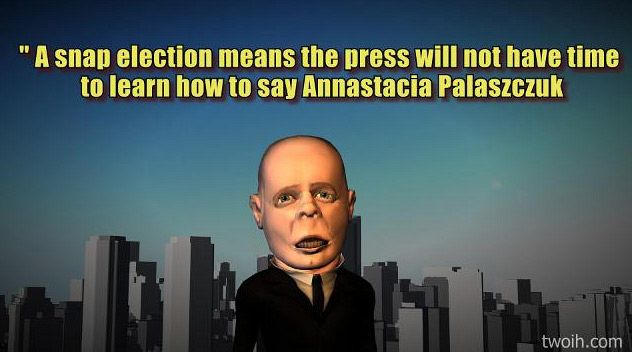 Campbell Newman reveals why the sudden election decision", Rob, ‏@TwoEyeHead quick off the mark with his graphic

Ok, the busy Christmas period is over and nothing much is happening Federally so the Queensland election being announced yesterday (06 Jan 2015) had Twitter falling over itself with a new election to play with. However, it has become apparent that even though many are obviously aware that we are “special” here in Queensland, to many were not fully aware of just how bloody different we are LOL! Hopefully this and others in this series of posts will help answer some of your questions if the likes of the esteemed Antony Green have not already, or the hard working David Marler on twitter (seriously, if you want to play the game of Queensland politics, do yourself a favour & follow David) are not available, feel free to ask more and if I can’t answer them, well I can find those answers for you over the coming weeks or outsource them to experts as you do ;-)

Before we discuss anything political in Queensland you have to burn into your brain the fact that the Winner takes all in Queensland.

The most important facet of Queensland politics is that we don’t have an Upper House, we are a Unicameral Government and you can blame the ALP class of 1922 for that little gem. Yes you read that right, Politics in Queensland is a Winner takes all game. Therefore the Government in power has no pesky senate or similar looking over their shoulders, if you have the numbers, you can legislate to your hearts content.

No we are not being lazy calling the Liberal National Party ‘Coalition’ in Queensland the LNP, it is the official entity. In fact, the LNP did not even come into being until 2008. This is important to remember if you want to play along with politics in Queensland.

Unlike the rest of the nation, the Liberals traditionally are NOT the big brother in the Coalition in Queensland. The National Party (formerly the Country Party) have been the big power player with the Libs making up the numbers. In the early 1980’s Joh Bjelke-Petersen was stoked when he had enough numbers to not need them to form a Government and kicked them to the kerb quick smart.

Anyhow… Those heady days of conservative dictatorship in Queensland were long gone by the 2000’s and on a few occasions the coalition did almost get over the line, though even when they did win power, they would inevitably end up having leadership fights, normally just prior to an election being called of course. Hence some bright sparks deciding to end the coalition infighting by officially merging the two in Queensland and coming up with the LNP. People quickly forget that this initiative itself caused many a politician to spit the dummy, though of course since 2008 it has been all smiles and lollipops - on the surface anyhow.

Underneath the surface of the LNP at grass roots rumours abound depending on who you talk to. Many Liberals are still crowing to this day that they are now the big brother in the relationship & ‘rule’ the party. Many Nationals are furious with what is in effect a Liberal coup of the LNP and this is most likely why so many die-hard country Nationals have defected to the likes of Katter or Palmer. Behind the smiles, there is still Lib vs Nat jostling and I suspect it will take another decade at least before the LNP really are a party in their own right in reality not just superficially.

Ahh fascinating man, at one stage he was the most powerful Liberal in the Nation as Lord Mayor of Brisbane. Like the sainted Sir Joh, he is not a native Queenslander (make of that what you will) and he became leader of the LNP outside of Parliament when he was still Mayor of Brisbane. Yep we elected a bloke as Premier of our state who had never planted his butt in Parliament as an MP? 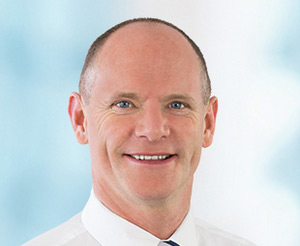 Why you ask? Well, many theories abound, the LNP will tell you he was the best man for the job. Insiders say he was a ‘compromise’ choice due to too much LNP infighting as to who would lead them. Remember this happened after they had lost the previous election that they should have won. The more cynical insiders say Newman was the PR strategy choice. The Queensland floods had raised his profile considerably - shame no-one questioned why he had so much time to chat to all the morning infotainment shows? Hint: State of Emergency, he was sidelined while Disaster Management ran the show - making him the perfect person to lead the party. Pretty much the mums & dads in the LNP had enough of the Leadership fighting and told all the contenders, “Enough, none of you can have the prize, we will give it to the new kid”.

Another rumour is that Campbell Newman was just supposed to finally get the LNP over the line, be a good boy, do as he was told, and then hand over to one of the ‘real’ State Politicians once the LNP are back in their rightful position of Lords of Queensland. Well, as we can see in 2015, that did not happen.

So the ‘fresh face’ of the LNP without the legacy of the old National Liberal leadership games became Campbell Newman, regardless of his not having any state experience at all, but that is how we roll in Queensland. Hell we have an Attorney-General who at the ripe old age of 30 (yes 30) who was pretty much only a Conveyancer prior to being promoted to the job of top lawmaker in the state.

In fact, thinking on Mr Jarrod Bleijie, it is the young’uns like him without the decades of Liberal or National party membership baggage who are the future of the LNP, think on that for a moment…

This was no ordinary election. The ALP had been in power a long time, Anna Bligh was going for a Ninth straight ALP win. Queenslanders though were dirty, nearly everywhere in the state had a bone to pick with them, from proposed Asset Sales and Council Amalgamations to form Mega Councils to the Health Payroll Fiasco, not to mention a few massive Natural Disasters (Larry, Yassi, once in a century flood) and the GFC put Queensland seriously in hole financially and too many ALP decisions made that red figure worse. With a fresh faced Newman leading the LNP the tired ALP were always going to lose, though no-one, and I mean NO-ONE expected the loss to decimate the ALP. Even Queenslanders were shocked to see the LNP win 78 out of the 89 seats.

People in Queensland woke up the day after that historic election to find that the punishment inflicted on the ALP resulted in many of them electing a local MP who they did not even know the name of, who in same cases, never expected to get elected and was just making up the numbers for the LNP in safe ALP seats. This is a very important fact to consider for this current election, as no way in hell have all those back benchers made any sort of impact for their communities and this means that there will be a bit more balance this time and the ALP should win back quite a few of their traditional seats now that Queenslanders have gotten over their WTF moment. 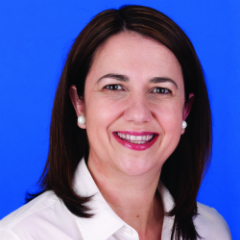 Anna P is the leader of the ALP in Queensland. The poor woman was pretty much the last experienced MP standing after the armageddon visited upon Queensland Labor on the 24th of  March 2012. Armageddon is not too harsh a word to use, this party went from 51 seats in 2009 to a measly 7, yes SEVEN seats in 2012, in fact, not even having enough seats to be officially considered ‘Opposition’ status, though were allowed the courtesy as I suppose the LNP didn’t want to gloat too much and look like Queensland had just entered a period of official dictatorship.

For those playing outside Queensland - and I include a number of Journalists in this comment - it is NOT hard to pronounce Ms Palaszczuk’s name correctly and the shoddy ‘alphabet’ type inferences are demeaning. Mr Henry Palaszczuk, esteemed father and former Queensland MP & Government Minister himself can help you there with pronunciation:

Queensland being a one paper state, the Courier Mail (of the News Corp stable) and Nightly News being more interested in sport, Clive Palmer’s latest antics or Premier Newman’s grand announcements (woohoo another tunnel), not to mention the fact that Annastacia Palaszczuk leads a party who’s MP’s can all fit into the one Tarago to hit a party function means that there has been little media focus on her. Obviously this will change in the next few weeks, though it might be too little too late to get the ALP back into power?

From Mr Newman’s comments yesterday, it would seem that the strategy is to make this a contest of LNP vs ALP.  As mentioned earlier, he does not want a hung parliament, that would mean deals and accountability to minor parties and as we know, in a Unicameral Government, why do that when all out power is so much more palatable? Ms Palaszczuk seems to have gone with the David & Goliath strategy, which, pretty much is an apt one, so it will be interesting to see how this plays out. Stay tuned ;-)

Cheers,
Noely
PS: As I'm an upfront sort of old bird, I will state that I have briefly met Anna P and have to say she is a very hard working, compassionate woman. It is a shame that the media seem to infer “Anna who?”, instead of taking a look at how hard this woman has worked to build up an opposition from the rubble left in the wake of the 2012 decimation of Queensland Labor?