UPDATED: The Guardian Australia, please, we need to have a chat 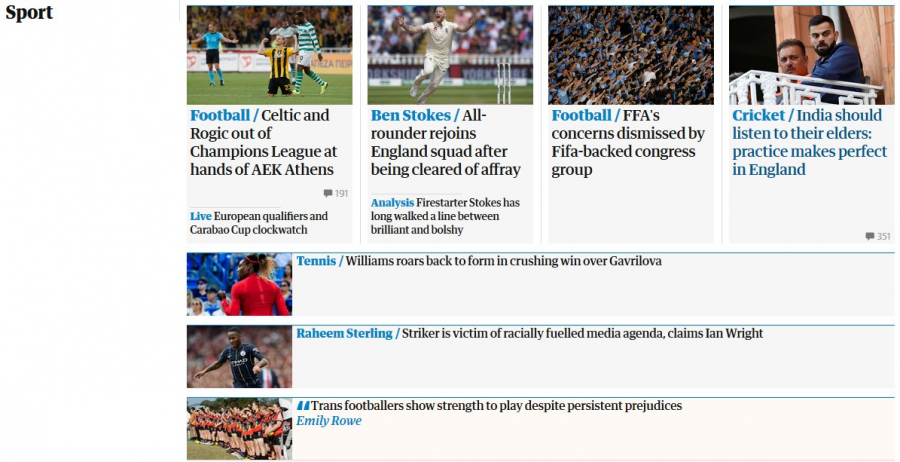 Too often you can go many days and not see any women's sport featured in this front page sports splash, sadly.

If you could take a moment to sign this, here below, it would really be appreciated. You don't have to care about sport, this is about getting more coverage of Women, LGBTIQ, Hell, Diversity! That matters, in all aspects of our life and we can't afford to lose the little we had and #BallsOnly sports coverage is NOT the way to go :(

An open letter to Lenore Taylor, Editor, The Guardian Australia.

Now before I go any further let me state up front, I love The Guardian, I really do. For mine, their move into Australia back in 2013 was one of the best things to happen in the media landscape in this nation in a very long time. I have enjoyed watching the Guardian grow, even getting the odd thrill when Journalists I have admired in other publications get poached to join the stable – looking at the likes of you Amy Remeikis – and thinking to myself, “oh good choice”.

However, the only area you have let me down is Sport. In a nation like Australia, good sports coverage matters. I waited, I was patient, I knew you were new into this country and it would take a while to build up all aspects of reporting and you did build up more sports reporting. Mostly of the male variety.

So often I would sit down and cruise through the sport in most papers on the weekend and too often it would be what I colloquially describe on twitter as #BallsOnly. Just full of men doing manly men’s sportsball. The screenshot above from the other morning did manage to toss in one female sports story, though, sadly I suspect if it was not the most famous sports woman in the world, Serena Williams, it would have been another #BallsOnly sports splash. Now, The Guardian are not the Lone Ranger here, this is common on all the big news media sites. Australia has a long way to go in respecting women and their achievements fullstop. Getting media organisations to respect women’s sport is just one aspect of that lack of exposure and respect for women in general in this nation.

The problem is, I expect better from The Guardian.

Recently, this issue has been addressed to a much better standard. Since Kate O’Halloran, sportswriter and commissioning editor, joined we have seen more sports reporting in the form of both women’s sport and diversity appearing to be taken seriously by The Guardian. For mine, there was still not enough – though in all honesty, will probably never be enough for me LOL! – but it was a noted improvement that gave me hope. We saw more pieces on AFLW, Netball and female achievements in the traditional male dominated sports. More importantly we saw that vibe The Guardian is well known for, pointing out the oddities and often injustice that most papers don’t, with pieces like “Faster, higher, stronger? Not in Olympic women’s road cycling” pointing out the watering down of the Tokyo 2020 Road Cycling course for women.

This type of work, covering Women’s Sport and noting fairness fits in perfectly with the values Katharine Viner the original Editor of The Guardian highlighted in her welcome statement back in 2013, quoting their legendary editor CP Scott:

“Honesty, cleanness [integrity], courage, fairness, a sense of duty to the reader and the community.”

This improvement in the Sports section peaked in recent times. I had hope that if this trajectory was to continue the days of the #BallsOnly – or two women’s sport pieces maximum – being splashed on the front page of the sports area might be slowly fading at The Guardian.
Imagine my shock when I saw Kate O’Halloran tweet she would be leaving the Guardian in early October?

3. As deputy sports editor at the Guardian I had a platform to be vocal and active in redressing those inequities.

Unfortunately due to budgetary issues with the Guardian sport department I was told yesterday that they will no longer fill my role beyond early October.

For “budgetary issues” of all things?

Are you kidding me. Not only was The Guardian Sport section finally improving it’s diversity and inclusion of Women’s Sport, but, it was only last month you were proudly announcing you have finally recorded your first profit?

So how can you justify removing a journalist who has done so much to improve the diversity of an important area of your coverage? I remind you, this is Australia, sport matters, so do women too in fact.

People like myself are the reason you made a profit. We are the reason you have thrived in this nation. We support your journalists and contributors, we read the work, we also contribute financially both small and large in appreciation of no paywall.

So as a Guardian supporter, I am begging you. Please Ms Taylor, don’t take this retrograde step.

I understand there could be more to the terminating of this contract with Kate O’Halloran that supporters of the Guardian like myself may be unaware of, but you can’t argue her work has not been top shelf and the diversity of sporting content has massively improved since she joined you. I seriously can’t see that area where you were lacking, continuing to improve with decisions like the removal of Kate? It is not like you have a massive Sporting staff to fill that void?

You have always been champions of diversity and fairness, the variety of your contributors, your ethical stance on Marriage Equality, Indigenous Australia, and even most recently, your excellent "Life on the breadline" series. Kate O’Halloran's contribution in the sports section enhanced this admirable aspect of The Guardian so many of us admire.

As a reader & subscriber of @GuardianAus I am very disappointed to learn that there is no budget for a talented and passionate sports writer like @Kate_ohalloran who has unashamedly focused on women's sport & gender inequality in broadcasting, pay parity and competition.

Sporting coverage matters for all media organisations in this nation who wish to be taken seriously. I would also suggest that covering more than the standard #BallsOnly sportsball as you have been recently was respected by more than just myself.

If this is solely a budgetary decision, then please Lenore Taylor, with the greatest respect – and I’m not blowing smoke, I do respect your work greatly - I beg of you to reconsider. As a political journalist who would have covered many a budget lock up, you are very well aware that budgets are all about ‘choices’. If you could please look into this situation, the sporting department and a possible continuation of Kate O’Halloran’s employment past this October date, that would be greatly appreciated as not only would it be disappointing for the Guardian to lose this diverse influence in their sporting journalism, it would be disappointing for us who have supported the Guardian in all aspects and patiently waited for the eventual improvement in sports journalism that Kate O’Halloran provided us.

PS. If you could spread the word that would be appreciated. Women's sport coverage is just a small part of diversity and equality but it matters. If it matters to you as well, can you POLITELY (please, be polite) let the below know who can maybe reconsider this decision :)