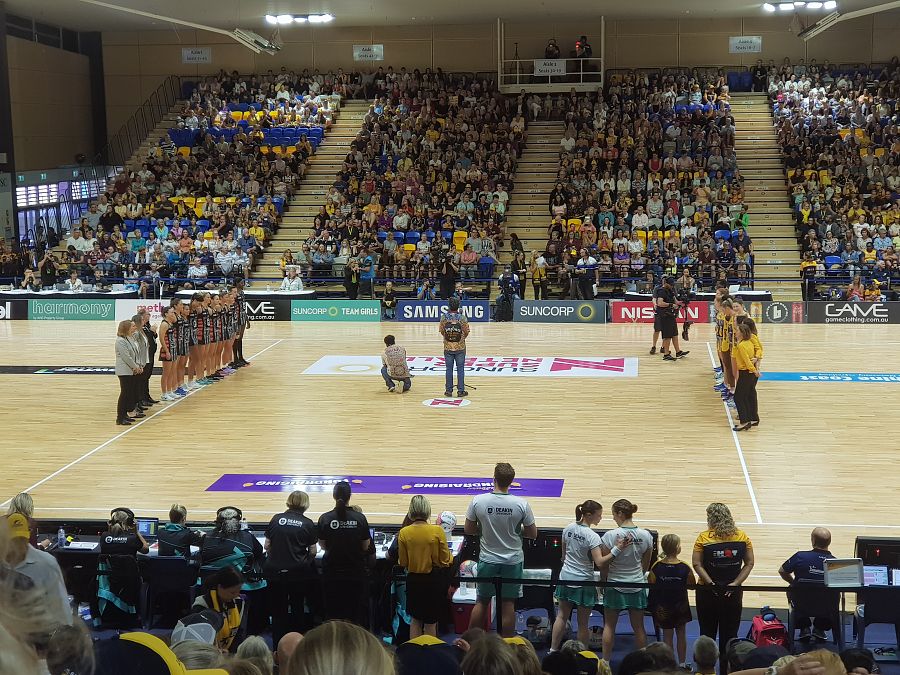 The 2 point shot idea in Netball? Get in the bin!

The 2 point shot is back again, like a bad smell it just won’t go away UGH! We just had a great season of Suncorp Super Netball, we are now in the phase where the post-mortems are done on how the season went, what needs to be improved, changed, what we can do better etc., and the survey has gone out. Which is great, don’t get me wrong, I am really happy the powers that be are asking fans for their opinion, but… Bloody Hell, question 8…

The 2 point shot is back again, like a bad smell it just won’t go away UGH! We just had a great season of Suncorp Super Netball, we are now in the phase where the post-mortems are done on how the season went, what needs to be improved, changed, what we can do better etc., and the survey has gone out. Which is great, don’t get me wrong, I am really happy the powers that be are asking fans for their opinion, but… Bloody Hell, question 8…

Now, this survey gave the vibe that you had to number 1 to 4 to go onto the next question, you didn’t, you could just put in a one if you wanted and leave the rest blank. This is a worry, as I doubt we will get the raw data from this survey and stuffed if I know who the hell keeps raising the odious idea of 2 point shots but just like our preferential voting where you have to put a number next to a really shitty candidate on polling day who makes you want to have shower just doing that, many would have had to put a number next to that 2-point shot, even if it was 4 if you didn’t know it could be left blank.

This is where I worry about not being able to see the raw de-identified data – hey, I could be wrong and we will be able to access, or some journos will maybe? – as whoever is pushing this could easily add the votes on this one survey question to the success of Fast 5 as a one off weekend carnival, which is a fun shoot & giggle but not serious netball, and we end up seeing a media release before next season along the lines of “Fans have spoken and the exciting 2 point shot will be introduced in 2020” ARGH!

I am only a fan, but I have found it is only the rare fan who wants this 2 point shot and even then, they usually only want because they are sick of seeing the super tall standing shooter under the post and find that boring. Fair call, though if you look at this most recent season, well, it seems defenders have gotten used to this and the likes of CBass & Fowler were not as successful in that role as they were the previous season. I expect tall shooters will have to try even harder next season, so don’t really see it going back to boring.

Power plays & Non-alternate centre passes? What even…? Maybe some are fans of that, but seems more entertainment than sport to me and to be honest, I don't quite 'get' what they are about.

Yes, I think nearly every person can agree with that.

I guess it goes back to that ‘polite’ business netball likes to think it has, but it is dumb, really dumb. A player to be subbed off has to pretend to have an injury to come off court and be replaced. I have always thought it was stupid and have to admit I cracked up watching the recent Netball World Cup where a player was denied coz they forgot to give the Umpire an ‘excuse’ as to why they had to leave the court, it was a funny farce.

Though, in all seriousness, I did rethink this when sitting at a game, hearing a little girl behind me question her Mum when Steph Wood came off court, pointing at her leg. Steph Wood was obviously her favourite player and she was distressed to think that Steph might be hurt. Her poor Mum then had to explain Steph was just pretending to be injured as she needed to be replaced on court. This kid would have been maybe 6? Obviously did not like to think Steph would be 'lying' as that is not a good thing, I so felt for her Mum trying to explain that yes, "lying is bad" but Steph really had no choice and well, the conversation got even more convoluted from there :(

This interaction really made me think about it. It is so unnecessary. The game is spending a fortune encouraging kids to play netball, follow the rules, respect the umpires, yet at our elite level we are demonstrating to them that we lie to umpires to get subbed off court? Not a good look.

Let’s face it, as actors our players make really good netballers, barring the few who are great at pulling those penalties LOL! But I digress, rolling subs without the really poor acting performances is a no brainer for me.

The survey did get me thinking though, We don’t want Super Netball to be like twitter, where we all ask for an edit button or a sarcasm font and Twitter goes “Oh we know what you want …. So here is a shitty new look no-one asked for” UGH!

So what would you like to see changed or added to the next season of Super Netball?

My wishlist would be:

The game has gotten a hell of a lot more faster and more physical - yeah yeah bin the “netball is a non contact sport”, that boat sailed years ago.

It is just not possible for Umpires to see every infraction, particularly those that happen just off the play. People love to think we are still a polite game, every hit is ‘an accident’ or ‘slightly late’ and this is rubbish. Adrenalin, white line fever and sheer competitive natures make a lie of that and to be honest, if you have non netball people on the couch with you watching the game, they are flabbergasted when they see a bit hit and hear “no intent there, just slightly late challenge” uttered by commentators. Yeah… Nah…

All professional sports have some form of MRP, it keeps the game clean, ensures bad habits are coached out of players and to be frank, helps ensure a duty of care to employees, ie the players on court.

This seems arbitrary at the moment, sometimes the Umpires call time out, sometimes they don’t. This season we had so many drawn matches, bonus points each quarter matters so this means the seconds do as well. If we could work out a way that an opposing team could not waste time to stuff up the other with accidental (and many are accidental) pushing ball out of court that would be better. It must be hard on the Umpires having to decide when time should be stopped.

If it was just a standard, every time ball goes out of court or something like that, would take the decision out of the Umpires hands and would be fair to both teams who may need those precious seconds.

This is a fantasy one I would love. Everyone has phones nowadays the tech is available and not hard. It would be great if instead of a few faceless people deciding who Player of the Match was if fans could do so. Would not hold up broadcasts at all. And… we might see a few less shooters getting it LOL!

Would make interesting, just advise link before you go to ad break at end of game, show list of both teams on that link, you click on who you think was MVP and submit, they would have an answer in their hot little hands to announce after that ad break. The tech is there & is super simple, dead easy.

Hell, knowing netty fans, heaps would have already submitted by the time the final whistle blew. Would be great for fan interaction and at least when some don’t agree they can blame other fans instead of Suncorp Super Netball or Nine LOL! Now that would get netball twitter going… 😉

There are heaps more I could add. Last night @Old_Rando did a sarky thread taking the pee out of super netball suggestions, which of course went off track and became hilarious, check it out.

@SuperNetball is at it again, including fast 5 elements like 2 point shots and powerplays as options in their fan survey. Other ideas discuss include:

Though I do have to admit to being a fan of @Caitl19 response LMAO!

“WD’s Revenge”. Each team gets a bonus goal for every Nissan Netpoint their WD should have received during the game if it was a decent rating system.

What would you like Suncorp Super Netball to consider? Trade season so far has been a real dud as far as netty gossip goes, so let’s go to town on this one while we fill the netball void until Constellation cup 😉

PS. I'd also like an "inclusion" round? Less gratuitous shots of random famous sports blokes in crowd? I love Team Girls & Bronny Dunlop, but maybe not on such high rotation in ads? LOL! Your thoughts?

One big thing you have forgotten - EXTRA FLIPPING TIME

An Australian media that is more respectful of our athletes would be good too? 3 times in one 7 day period they got captions for photos wrong and this one yesterday was just seriously crook UGH!

So typical for our #BallsOnly media attitude to #Aus #WomenInSport
A. If Rav did not have this bloke as a partner I would not even know he played sport.
B. He might be a good AFL player but achievements pale in comparison to Rav being a Diamond, NWC, Comm Games, ANZ Champs... https://t.co/0MFVBduzzR