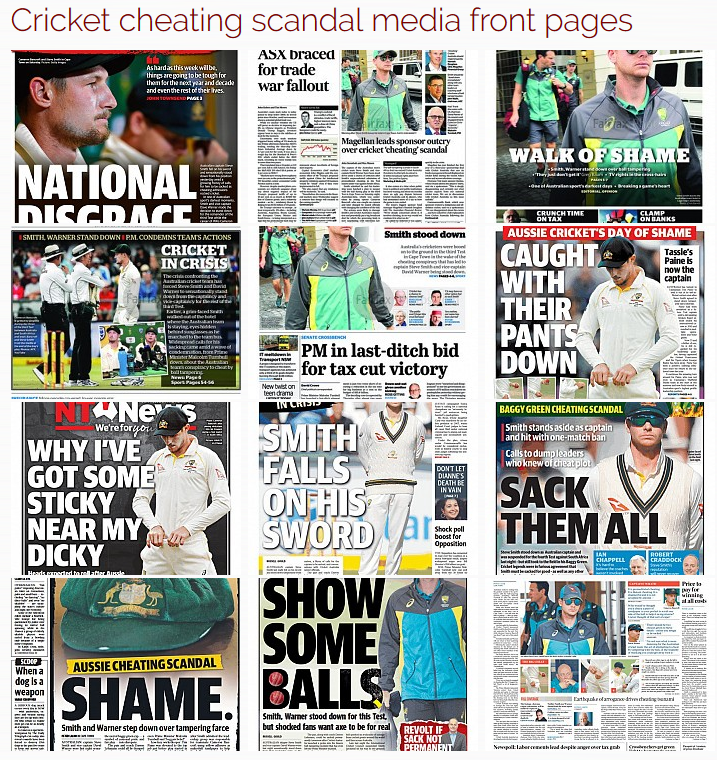 Cricket huh? Who would have thought a ‘game’ could unite the country in this manner? Well, unite them in outrage anyhow. Left, Right, Conservative, Green, you name it, most of Australia have finally found something they all agree on, both online & offline, “Our Cricketers Are a National Disgrace” and other sentiment along those lines.

Cricket huh? Who would have thought a ‘game’ could unite the country in this manner? Well, unite them in outrage anyhow. Left, Right, Conservative, Green, you name it, most of Australia have finally found something they all agree on, both online & offline, “Our Cricketers Are a National Disgrace” and other sentiment along those lines.

You would have to have been living under a rock in the past 24 hours if you missed Steve Smith’s insouciant press conference admitting to ‘ball tampering’ in South Africa yesterday. As far as sins in cricket go in recent years it is not really up there with the likes of ‘Match Fixing’, though considering Australian Cricket – and Australian Cricket fans in general – have screamed blue murder every time another nation has been pinged, well, the standards were considered much higher here for the so-called “Gentleman’s Game”.

Personally, I’m not much of a fan of Cricket. I used to be as a kid, though over the years my interest has waned to the point where when Ricky Ponting took over, I pretty much turned off totally. Too many tosser captains who seem more like Private Schoolboys earning too much money yet whining about too much work, yet not skipping IPL where they earn a fortune in India for a break ARGH! Anyhow, having said that, I do get the outrage. As a sports fan myself, I would be shocked and devastated should I have learned say the Australian Diamonds had cheated to win a series.

What really saddens me though is it is this, a cricket scandal that unites the nation in ‘outrage’.

I can’t remember the last time ALL twelve major papers in the nation had the same issue splashed on their front pages. Every. Single. One.

The lovely John Hanna tweets the front pages every morning and a flick through shows them all on a unity ticket.

Compare this to say revelations in February last year where the Royal Commission into Institutional Responses to Child Sexual Abuse (#CARoyalCommission) revealed the horrifying extent of abuse in the Catholic Church in Australia. 4,444 victims! 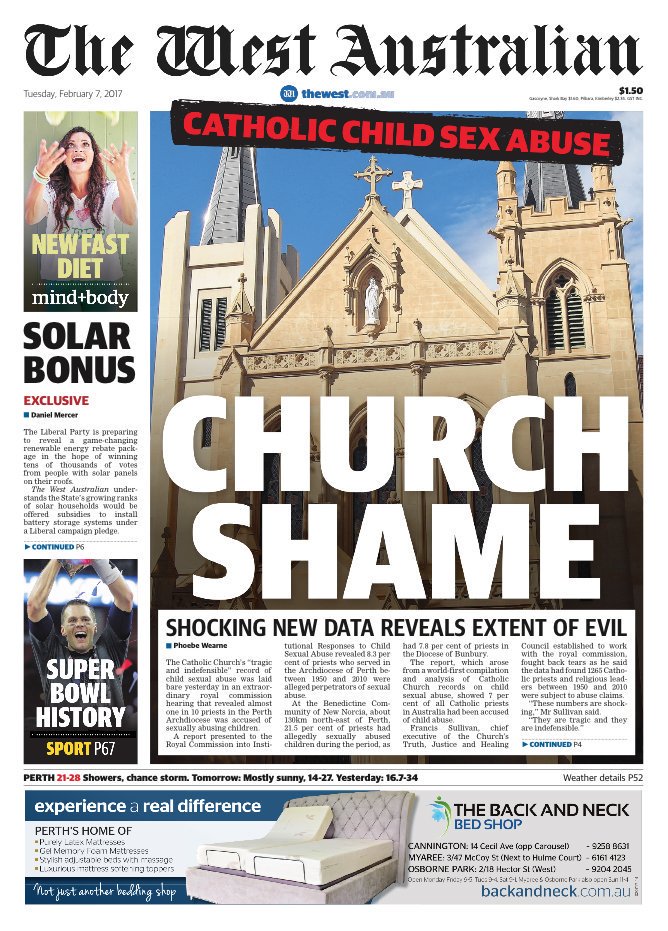 Yet we didn’t see a dozen front page splashes over this horror? We saw ONE. Only one paper considered this heinous news to worthy of a yelling top note to their readership, The West Australian. In fact, if you watched the mainstream newspapers, you may not even have been aware of these findings.

If we want to look at recent events, particularly in light of mental health concerns for young kids, you would think the repeated attempts of a TEN YEAR OLD BOY on Nauru to kill himself might be national concern, worthy of a front page splash, considering these refugees are incarcerated on this tiny island at the behest of our Government and our Home Affairs, Immigration and Border Protection Minister Peter Dutton is supposed to have a duty of care for these children (on our behalf). But… MYEH! In fact, if you raised the issue in your local pub I would be very surprised if any punter in there had a clue what you were talking about ☹

Our Prime Minister sure as hell has not bothered to comment on this issue.

Hell, even if you are the sort who doesn’t give a rats about our treatment of refugees, there have been many issues in the past few years that should have received round condemnation from our mainstream media organisations, from Centrelink’s #robodebt to Michaelia Cash throwing women under the bus and of course how could we forget the dismissive attitude in both media and our by our Prime Minister to the Referendum Council's recommendation for an Indigenous voice to Parliament, “Uluru Statement From The Heart”?

There are many more issues that should have resulted in national outrage with front page splashes over all the newspapers that I would consider more newsworthy and more importantly, in the public interest than a Cricket scandal. I’m sure many of you would think so too, knock yourself in the comments below, raise those issues please.

When it comes to outrage, our Prime Minister, Malcolm Turnbull really takes the cake.

Within hours of the Australian Mens*  Cricket Captain, Steve Smith, holding his rather extraordinary ‘yeah we cheated, all the leadership team agreed to give it a red hot go, we got pinged, yeah, sorry about that, move on…’ style press conference), our Prime Minister is holding centre stage, all faux concern and indignation, assuring the nation he has had “frank discussions” with Cricket Australia about this “cheating”, urging them to take "decisive action" against the cheaters. Seriously I kid you not, he actually said “decisive action”?!

Remind me, exactly when has our Prime Minister ever taken any “decisive action” in his own backyard? Any of his MP’s or Senators pinged for wrong doing take months of media harassment before they might even consider ‘an error has been made’ and even then will either squirm out of the transgression or in the case of the s44i dramas – looking at you Barnaby Joyce – fight to the bitter end, bullshitting about nothing to see here until they are forced to face the music, of course, not actually resigning or apologising to the Australian public for ripping them off and lying to them for so long? Their leader, Mr Turnbull, never seems interested in any ‘decisive action’ in that regard?

I will give it to Steve Smith, his entitled private school boy type press conference might have really raised my hackles with his attitude of ‘yeah we did it, get over it, by the way, if I’m going down, so are the rest of the leadership team’ BUT at least media did not have to hound him and the team for months to get this admission, unlike our other entitled private school boy Prime Minister when faced with Government scandals? Though like PM Turnbull's 'form', Steve Smith, as Leader of the team seems to not think it is his responsibility, nor should he fall on his sword with this cheating happening under his Leadership ARGH!!

Steve Smith conspired with leadership group to cheat. If he’s stood down, he’ll have a bright future in politics.

I know everyone hates ‘What About’ type stuff in relation to big issues, in fact, I normally am not a fan myself as I often feel it takes away from the issue at hand which needs to be addressed, but… The Prime Minister’s towering hypocrisy in his response to this cricket scandal can’t be ignored. Though I would hazard a guess that our Prime Minister is hoping this story runs & runs as he sure as hell does not want anyone looking at the latest Newspoll figures seeing front page splashes of “One to Go” huh?

I also think we need to have a good hard look at ourselves as a nation if this, a ball tampering scandal in a Cricket match which let’s face it, is not even the bloody Ashes, unites Australian citizens, Australian media and Australian politicians in outrage?

Yes, it is big news, massive actually, but what does it say about our priorities and us as a nation? We might have a better Government and nation in general if our Prime Minister and Government was held to the same standards of integrity as our National Mens Cricket Team?

* I like to specify it is the Australian MEN’S Cricket team as our women, our more successful, under-paid, barely mentioned in media, Australian Women’s Cricket Team – Southern Stars - are sensational athletes and role models!