Slow Clap Australian Government, you have done what no Terrorist could :( 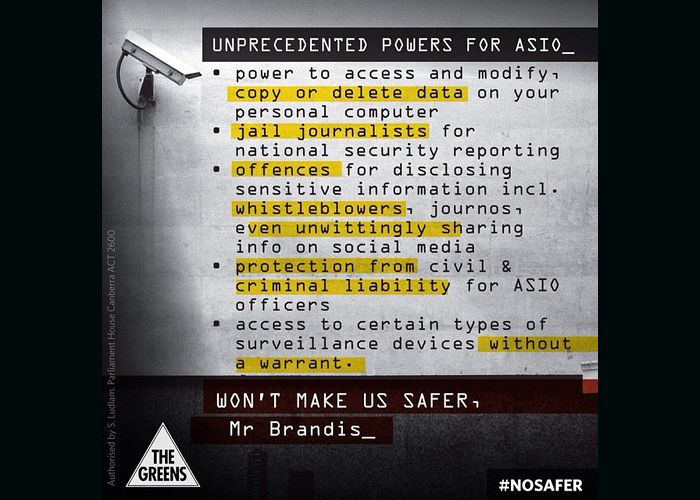 Last night in a bipartisan move the Australian Senate passed the National Security Legislation Amendment Bill (No. 1) 2014, (or read the good Guardian Australia summary of the so-called ASIO Bill) it still has to go to the House of Representatives, which as we know is just a gimme, so pretty much this is a done deal. We as a nation are now the proud owners of a piece of law that allows employees of the Government (ie ASIO & ASIS) to monitor the whole of the Australian Interwebz and jail whistleblowers. Makes you proud!

Our heroic Attorney-General George Brandis, head legal dude in the land is a very happy camper this morning. The same upstanding morally incorrupt man who OK’d ASIO & the AFP raiding a lawyers office, and not just any Lawyer, the legal eagle representing East Timor at the Hague in a case against Australia for pretty much dodgy dealings in past negotiations. Though don’t you worry folks, Mr Brandis assured us that the timing of the raid, the info taken etc. would not impede Timor-Leste’s case - Much!

Now don’t get me wrong, I am not dissing the staff at either ASIO or the AFP, I am sure they are experts in their fields. Though, they are still Government employees, like the poor ABC, their funding and whether they have a job next week is reliant on their Government masters. They are also not infallible, (as no organisation is) and mistakes have been made in the past, hell, they can’t even explain what the hell metadata  is and why they want it so badly - the next ‘tranche’ of laws coming to a computer near you soon - and we are supposed to just ‘trust’ that they will not abuse their new super dooper snooping powers?

It was only just this week that we saw that saint of the Liberal Party, Sir John Howard (sorry, pre-emptive there, still just John, but stay tuned…) admit, yeah, bit embarrassing, that whole WMD’s ‘thing’ in Iraq, you know, the inspiration for fridge magnets all over the country, deaths of many, umm couldn’t actually be found, DOH! Sorry about that - actually no, he didn’t say sorry, carry on, nothing to see here - and of course Mr Rudd, who was in opposition at the time went merrily along with Mr Howard, as the unspoken rulez say all parties have to be on Team Australia as soon as the ‘Terrorism Boogie Man’ is called into play.

I’m not saying ISIS, ISIL, IS, Daesh, Khorasan or whatever the hell world leaders are calling them this week, are not crook and need to be shut down. Though as the esteemed Mr John Birmingham points out in regard to Mr Abbott tossing us into the mellee about to go down in Iraq “There will be boots on the ground. This will not protect you. It will, with dread certainty, increase the chances of atrocity here.”.

Yet somehow the threat from these terrorists is so bad here in Oz that Mr Abbott & Ms Bishop have had a field day with speeches at the UN Security Council (let’s ignore the fact they railed against the previous Government getting that seat when in Opposition huh?), our very own little Aussie Freedom fighters leading the International charge - so proud - and old mate Brandis back home rolls out the below sage words to back up Team Australia's International 'leadership':

"Freedom is not a given. Freedom must be secured particularly at a time when those who seek to destroy those freedoms are active, are blatant and are among us."

Let’s look at just one of the many definitions of ‘Terrorism’:

Well our Government may not be using violence against us just yet, though some of the recipients of the love from the 800 AFP officers earlier in the week may disagree - Oh heads up kiddies, good future employment prospects in our policing & security organisations since you can’t afford to go to Uni now, it will be a growth industry -  but we are most definately being intimidated.

The man who has ‘form’ in using the ASIO (I am so sorry Timor-Leste, many of us in Oz are ashamed of that action) in the past, the political party who took us to war on mythical WMD’s and our Dear Leader who has admitted in the past that he is less than truthful - commonly referred to in punter land as ‘Lying’ - have effectively just told us all that we will ALL be spied on. Worse, any whistleblowers who dare to ping the Government, sorry I meant any covert "special intelligence operations" (nice open ended phrase for 'whatever the hell we feel like as we won't get pinged for stuffing up) which ASIS & ASIO undertake on behalf of the Government will be tossed in the slammer.  Noice! Let’s hope we don’t have another WMD’s scenario (if we don’t have one already that is) as editors sure as hell aren’t going to take a punt on investigating anything suspect are they?

So just WHO is seeking to destroy our freedom?

In my humble opinion, yes there are those that seek to destroy our freedoms, they are blatant and they are among us, they are called the Australian Government. Terrorists must be stoked, as First Dog on the Moon, so perfectly illustrated in his latest “Isis's letter to the west” cartoon.

Good luck my fellow Australians in our new monitored future. Oh and... #HeyASIO when you get your paws on those mega one warrant sees all Interwebz next week, please call first, no need to bash the door down, thanks in advance :)

To ALP & every other Senator who got spooked by the ‘Terrorism Boogie Man’, (Only Greens, Leyonhjelm, John Madigan and Xenophon didn't roll over & play dead on this bill) go and give yourselves a good uppercut. Everyone of you who meekly went along with this Government, on very little evidence, turning us effectively into a Police State, betraying the so-called Freedom this nation is supposed to hold dear. I understand you don’t like to play politics with ‘Security’, but FFS! You could have put limits on it, you could have demanded an oversight committee to ensure it is not abused, you could have put a time limit on the law to be reassed in 12 months time, hell, any number of things, but no, you didn’t. Enjoy looking yourself in the mirror as you bullshit yourself into believing that you did the right thing, it is the only consolation you will have to help you sleep at night.