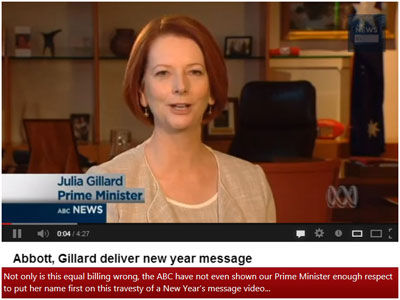 Just joking with that title above, not strictly true and as if any publication in this country would put Shorten’s name before Abbott’s?  Maybe I woke up channelling News Limited or Mamamia this morning, forgive me ;-)

So... Last year on New Year’s day I was feral.  All morning I saw both PM Julia Gillard AND OL Tony Abbott delivering their New Year’s messages, this fake ‘balance’ incensed me so much I did a post “Prime Minister Julia Gillard and Opposition Leader Tony Abbott DO NOT deserve Equal Billing!”.  If you were a foreigner watching the news you would have assumed that they were equals & worse, when ABC put the New Year’s addresses online, they actually put Abbott’s name first.  As we all know, words matter, particularly titles so someone at ABC must have known what they were doing or the editor was incompetent, either answer is not good.

Obviously being the narky person I am, complaints were made to the ABC in a few different formats, finally I did get a response on the 25th of March 2013 and was informed:

The ABC is committed to the principle of balance in its reporting at all times.  In the case of a New Year’s statement where there is the opportunity for a leader to speak unchallenged or unquestioned for a period of time, balance would require that the opposition be given a similar opportunity. It does not as you suggest any additional level of recognition on the Opposition Leader other than providing the opportunity to present an alternative view.

NOW where was this balance this year?

Admittedly, I did not watch the news all day, I do have some form of a life, sort of, BUT not once did I see any video of an address from Opposition Leader Bill Shorten.  In fact, I saw mention of his making a New Year’s statement in other publications, just not on the ABC?  Hell, even the head cheerleader of the Coalition included Bill Shorten’s words in their piece?  “Tony Abbott, Bill Shorten give their 2014 New Year's messages”.  How embarrassing is this for the ABC, the Daily Telegraph being more balanced than our National Broadcaster that prides itself on Balance? 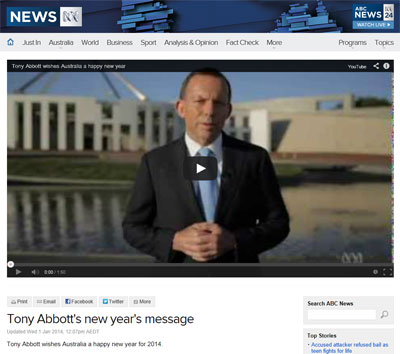 Waking up the this morning, I had hoped that the ABC had stuck by the words they answered me with this year & that I would see a similar ‘balanced’ piece online as they did last year, hell, would have loved to see it titled “Shorten, Abbott deliver new year message” as they did last year, nah, just kidding, knew that would never happen, BUT, did think that the ‘balance’ would be achieved.  What did I actually wake up to?  PM Abbott going solo, “Tony Abbott's new year's message”, not even a text message in relation to Mr Shorten’s New Year message?

There can only be a few reasons for this lack of Balance?

The ABC did not bother to mention Mr Shorten as he did not supply them with a video?  If that was the case, then would it not behove the ABC to request one, OR in the interests of so-called ‘balance’ mention in their reporting of Mr Abbott’s New Year’s address that the Opposition Leader did not supply one, just so us dumb punters at home didn’t think that the ABC was not being balanced to both leaders as per the answer I received from the ABC last year?  Or...  it is as per the 2nd (and final) line of the response back to my complaint:

We also make the point that balance does not mean equality of time. Balance is based on the news value of the statements made and reported accordingly based on the weight of evidence.

So does the ABC deem that what the Opposition Leader has to say in his New Year's address not of ‘news value’?

We know that an embargoed press release with Mr Shorten's New Years statement did go out to the media AND obviously what Mr Abbott said last year was considered to be of 'news value' by the ABC last year?  This one I will be interested in hearing a response from as obviously I have already sent off my complaint, as you do ;-)

Now, I would like to know what the Australian Labor Party are doing about this?  Obviously I tried to contact them yesterday via Twitter & email to verify if they had disseminated a video to media.  I had no answer back from anyone.  If they did, then they should be screaming blue murder about not receiving the same level of balance by our National Broadcaster that was accorded Tony Abbott last year.  If Bill Shorten didn’t do a New Year’s address video, then someone needs to be sacked for gross incompetence!

Bill Shorten, where the bloody hell are you?

There are many in this nation who are not necessarily ALP supporters (like myself) though are very anti-Abbott and on a morning when people are tired & too lazy to get going so are sitting on their couches flicking around on the TV seeing the boring old Leader’s, Queen, Pope, you name it, New Year’s addresses, for Bill Shorten not to be taking advantage of that air time is just ridiculous.  How the hell can the ALP expect support when they don’t seem to have helped themselves?  I hope I am wrong on this, I hope that Bill Shorten did do a New Year’s address and the ABC are at fault here, BUT, if not, geeez ALP, take yourselves outside & give yourselves a good uppercut FFS!  How the hell can we take you seriously as an opposition to keep the Coalition to one term only if you are not even going to act like an alternative Government?

Either way, even if the ALP strategy & communications team were incompetent by not disseminating a video to the media, this does not excuse the ABC.  They should have had more balance, they should have at least included what Mr Shorten 'said' in the press release when they showed PM Abbott’s video over & over again all day, they should also have included on the link they have on the front page of their website?  None of this has happened.

So now that we have a Coalition Government, has the recent criticism by Mr Abbott recently in regard to the ABC’s "very, very poor judgement" in regard to the Indo spying spooked the powers that be at the ABC?  Are the ABC worried about getting funding cut so currying favour with the Government?  Are the ABC just incompetent & didn’t bother requesting a response from the Opposition Leader to achieve their so-called balance as they did last year?  Or is there another reason we don’t know about?

All I know is what I can see.  What I saw last year was both leaders given Equal Billing in regard to New Year’s addresses to the nation, this year, only PM Abbott?

Not Happy Jan :(
Noely
PS. Will update when ABC responds to my complaint in regard to the difference in coverage of New Year’s addresses.
12.20pm 02 Jan 2014 - Thanks to Ros @roshart who found an article listing chief advisors to Bill Shorten "Rio Tinto executive Ken Macpherson joins Bill Shorten's team", so I wonder who on that staff list is responsible for giving PM Abbott a free kick on all the TV stations on New Years day, thereby failing to show Australia an 'Alternative Government'?