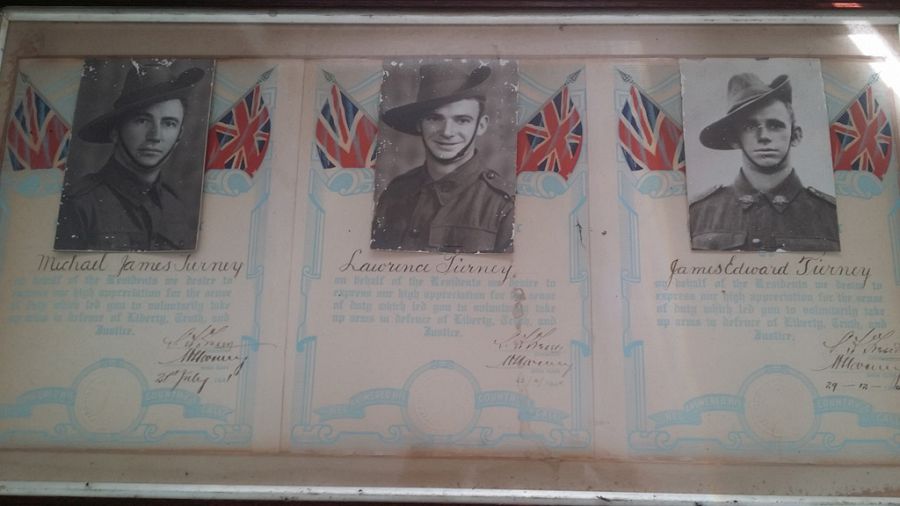 The above is only 3 of my Grandma's brothers who went to war, there were three others plus a sister. Only one, the middle one, my Uncle Lawrie came home, sadly damaged :(

I will be up front from the start, I stay off social media, actually most forms of media on ANZAC Day as it both depresses and frustrates me seeing what it has become.

In my opinion – if I’m still allowed to have one and won’t be carried off to the "Malcolm Turnbull Correctional Facility for the Patriotically Deficient" as @firstdogonmoon so eloquently put it – the ‘myth’ of ANZAC Day has gotten so out of control that it is bordering on religious fundamentalism, the particularly scary kind that Australians are normally the first to call out in other nations where there is no separation between Religion and State.

The metaphorical beating up and realistic sacking of SBS TV Football Reporter/Presenter Scott McIntyre for his comments on Twitter on ANZAC Day raise many issues for me.

A commenter in a Guardian piece On Scott McIntyre: the greatest insult is to whitewash the fallen summed up my own sentiment on this issue well:

MelbourTown: I suggested at my work that I was a bit bored with Anzac Day festivities. I know now how people in the past were treated when they said they didn't go to church!

Sadly, the fact that I am writing this 3 days after ANZAC Day actually illustrates this point. Normally I tend to joke about how many followers I will lose when I write something unpopular, yet never, feel the trepidation of the potential of the backlash for not kowtowing to the ANZAC Day ‘Disneyfication’ than I do actually publishing this piece now on my daggy little blog. Think about that...

I like history and am always saddened when we don’t actually learn from it. Geoff Lemon’s tweet probably summed up my feelings in this regard better than I could:

You can respect the dead without whitewashing who they were. That's what Australians collectively can't handle come Anzac Day.

This area is becoming seriously blurred.  It is also one I experience; I’m constantly worried about the ramifications of something I may say on Twitter that could reflect badly on the Small Business that I run in partnership with my family. I try my hardest to separate that, as a co-owner I also have the luxury of not identifying that business on my personal twitter account. Yet, the likes of Journalists don’t. It seems there is an expectation that they build up a following on Social Media to actively promote both their journalistic pieces and the other pieces from the Media organisation they represent. This is an odd game, as you can’t just toss out dry company tweets and expect to get a following of any size as that is just not how social media works. A following is built by the quality of the journalists work AND the personality displayed. For media orgs to try to pretend that followers don’t matter on Social Media except to represent ‘Organisation Profile’ is just a joke and such a large and complicated issue that it deserves a post all of its own one day.

Seriously, since when does a large organisation like SBS do a thorough investigation to sack an employee, within 24 hours, on a weekend? After a careful look at his contract, he may have been sacked, or he may have been cautioned, hell, he could have been sent off to Social Media training? Either way, in this day and age it normally takes a bit longer - during work hours- with a bit more HR & Legal involvement in an association the size of SBS to terminate an Employee?

Malcolm Turnbull was very quick to condemn Scott McIntyre’s tweets, then just as fast to give SBS managing director Michael Ebeid a heads up on how ‘offensive’ they were.  Next thing, McIntyre is sacked, yet Mr Turnbull says he was not behind the sacking.  I’m sure Mr Turnbull would not be silly enough to specifically state he wanted Scott McIntyre sacked, he has been around long enough to know how the game is played. BUT, Seriously? The Minister for Communications and ultimate boss of SBS - an entity that has already suffered severe funding cuts, with potentially more to come in the imminent budget – lets the head of SBS know how filthy he is with a staff member’s comments, on a public holiday mind you, and that has nothing to do with the rapid sacking of the staff member in question? If you believe that I have a bridge in Sydney to sell you...

This is a concept that gets bandied around all the time. I won’t even bother getting into it as for mine, it seems that Free Speech is only acceptable if you have enough people to back you up on what you said? Or, of course, enough money to fight any offense given legally :(
To be perfectly frank, only one of Scott McIntyre’s tweets 'seriously' offended me:

Remembering the summary execution, widespread rape and theft committed by these ‘brave’ Anzacs in Egypt, Palestine and Japan.

In my opinion – there were go again, having an opinion, though as I am not happy with this tweet, probably won’t be hounded for it – this statement trashed ANZAC Veterans as a whole and therefore was offensive to me. Having said that, if he could have just tossed in one extra word like “some” ‘brave’ Anzacs in... I would not have had an issue with it. As the sad fact is, there were instances of this, it happens in all wars and to pretend that 100% of soldiers are golden warriors, paragon’s of virtue representative of some mythical aspiration is just ridiculous and not even close to reality. I don’t know why Scott didn’t do that, he had 15 characters left in his tweet and could have? Who knows, maybe it is the habit you get from the brevity of Twitter? Maybe he was so angry and frustrated by the bullshit he saw all day that instead of walking away from social media he let his anger get the better of him? Hell, I know I have done that before and then gone “Oh Shit, I didn’t phrase that well”. Who knows, Twitter is not exactly the same as a carefully scripted and edited Media Release. Regardless, even if I was offended, I still back his right to say something that pisses people off.  As long as something ‘offensive’ is not actually threatening physical violence on social media or overtly discriminate then it should be discussed, should raise issues to consider, even be maligned by others who feel offence. BUT to stifle contrary opinion puts those ‘thoughts’ in the darkness, and that never ends well.

Don’t get me wrong. I’m not anti Veterans, in fact, I tend to treat ANZAC Day as my little version of Veterans Day - A day where I consider and think of those who came before me and those who even now are tossed into wars by politicians for all sorts of reasons and suffer for it. I do attend a Dawn Service, though a little local one, where the sentiment is paying respect to the Veterans who attend, not paying homage to the Politicians and other Dignitaries who hijack the day to say “Look at me, how important & reverent am I...?”

In fact, my family, lost many ancestors to the wars this nation has fought, the 3 above are only a few, and I have nothing but respect for them. I also had quite a few conversations with my Grandfather & Great Uncle and I can tell you now, they fought in different arena’s but had the same motto “NEVER glorify War”.

In fact, if my Grandmother – who basically lost her entire family to War – was still alive today and saw that footage of our Prime Minister Tony Abbott comfortably sitting there at Gallipoli with Prince Charles and Prince Harry who were representing the British royal family she would have been hissing at the TV. I can see it now:

What is he doing sitting there with those incompetent pommy bastards* who used our troops as cannon fodder...

Or something similar, she always considered Gallipoli a ‘massacre’ and knew exactly who she blamed for it.

My grandma brings me full circle. This woman, an intelligent, yet feisty female, who actually lost so much family in both World Wars, who lived in a generation defined by them, would, if around today, been pretty feral on the likes of Twitter on ANZAC Day. Knowing her as well as I did, the fact that time has passed and Gallipoli is now a sacred site in the eyes of the masses, aided and abetted by political manoeuvring over the years, would not matter to her, she would have let fly at much of the “ridiculous carry on” (a quote from her in the late 70’s on ANZAC Day).  Would she have been persecuted on Twitter too for not being politically correct and kowtowing to the myth?

Don’t get me wrong, my Grandma would have taken umbrage at exactly the same tweet of Scott’s that I did. Difference is she would have let him know that not ALL the ANZACS were. Though she would have also not have shied away from the fact that some were, “utter bastards & mongrels” and in fact, could have told him a few stories. Of course this would have been in between tweets calling out the bullshit that is now the propaganda arm of Government used to justify even more involvement in ‘foreign wars’ - ANZAC Day.

regards,
Noely
*Can guarantee Grandma would also have started on the US too, “bloody yanks” - not all, just the decision makers killing 'our troops' - you would not have wanted to see her on the likes of Twitter, still years later, furiously ranting about the “Brisbane Line” ;-)