Reef, Asset Sales, Sackings... Are not the biggest issues for #QldVotes 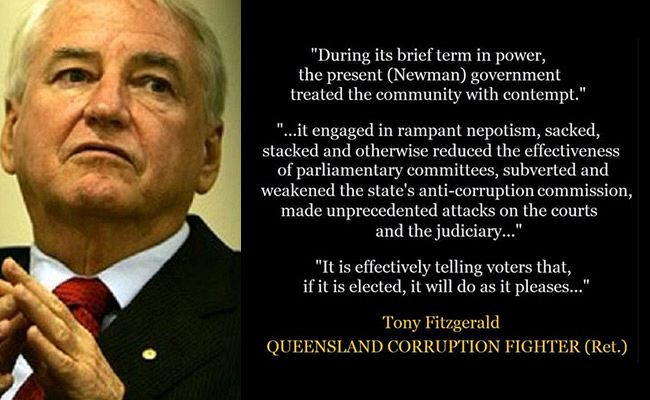 I know that heading sounds ludicrous, but bear with me.  Depending on your political views, there is normally one major issue that colours your decision come D Day – fact. Often it can be that you just ‘like’ a particular Leader, MP or Party? People of this ilk will never look to the actual governing, so I am not talking about the ‘feel’ crowd. I am talking about the people, of all shades of politics, who make their voting decision based on policy or promises made by political parties & candidates.

It does not matter if in your mind you think the biggest issue is:

None of the above are the real issue or should be in this particular election. In fact, in my opinion, regardless of whether it is a decade ago or a decade into the future with different issues being “OMG this election is a referendum on...” it isn’t.

The ONLY issue that truly matters in this election is Transparency, Accountability & Responsibility.

I know many of you have heard me harp on about the PCMC & CMC in Queensland. It is not a sexy subject, hence why the media obviously ignore it. Hell, Brisbane Times editorial did not even mention the muzzling of it in their “How you should vote on Saturday”.

As I have mentioned before, Queensland does not have an Upper House.  In fact I was thrilled last night to hear Tony Fitzgerald use exactly the same phrase I often use when discussing Queensland politics, it is a “Winner Takes All” system. Please take a moment to watch the ABC Tony Fitzgerald interview, it is rare for Mr Fitzgerald to give one, and his words of wisdom, delivered with calm integrity are well worth listening to.

Mr Fitzgerald’s words bring me to my point about why all the so-called deal breaker issues are not the most important aspect in this election.

A Political Party Leader, an MP 'ARE ALL PEOPLE' and those people who make the decisions on dredging on the Reef, Selling Assets or Sacking Public Servants, hell closing beaches, you name it. Yes we can vote them in or out depending on their decisions, BUT, that is always a retrospective act and the damage is already done.  To borrow John Birmingham’s amusing use of “Mr Strong Choice” aka Campbell Newman channelling The Hulk, this is exactly what we need in Queensland.

We need a CMC & PCMC of Hulk like proportions. An ICAC on steroids!

Imagine...  If a political party makes a decision favouring a particular company, conveniently after receiving a million dollar donation & to stop dissent, also changes the law to not allow protest of that decision, what do you think a Hulk like, totally incorruptible, Independent Body would make of that decision? It would be smashed. Not only would it be smashed, the “people” as in the MP’s or Party Leader who was involved in that decision would not only lose their jobs, they could also be criminally prosecuted?

Imagine...  If an MP sacked a lot of Government staff, then quietly a few months later decided hmmm actually we do need a few more staff in that department, then gave the contract to a Recruitment Company, that of course just happened to be a political donor, what do you think could happen with a REAL CMC? Well, the timeline would be investigated, the merit of whether that many staff did need to be sacked would be taken into account and most importantly, even if was deemed that ‘maybe’ it could have been justified, the tender process would have an eagle eye on it as well, not to mention the questioning of why it was even outsourced? If found to be corrupt, both the politicians involved AND donor could be charged criminally?

I could carry on with many more examples. Though the point is, if we had a seriously strong CMC with teeth, these decisions, made by ‘people’ would be thought over very very carefully and very hard before any decisions were made that could even have a whiff of corruption or policy for cash? No-one wants to go to jail for doing a mate a favour or a slightly bigger cash haul?

If you add a truly bi-partisan PCMC to this equation, then we have a truly accountable Government regardless of who currently ‘owns’ the Queensland Parliament.

If a particular party or body seems to think there is something off kilter about a Government decision, there would be very little stopping the PCMC referring it to the CMC for investigation. Whilst this is not the case currently, as the Government in power can stack this committee and pretty much ensure that none of their ‘own’ will be referred for further investigation it is useless. Tony Fitzgerald clearly illustrates these issues in "Queensland must put a stop to the political rot".

When our PCMC & CMC system were put in place by Premier Goss upon recommendations resulting from findings in the Fitzgerald Inquiry, all those years ago to ensure that the excesses and corruption of the Joh Bjelke-Petersen Government could never happen again, it was never envisaged that over the years they would be slowly and quietly watered down. Even someone cynical about politics like myself never imagined a Government would ‘sack’ a PCMC and muzzle a CMC as effectively as the current LNP Government had. Yet this is exactly what has happened.

Only by instituting a rock solid set in stone ‘Independent’ CMC with real powers and a truly ‘bi-partisan’ PCMC to refer Government members to said CMC will we have good governance in Queensland. Only in this manner can we ensure as little corruption as possible.

Only with the Transparency, Accountability & Responsibility that a REAL PCMC & CMC would ensure will:

This is why it is my fervent wish that all would consider Transparency, Accountability & Responsibility as the over-riding factor on how they base their voting decision this Saturday. Both major parties have been guilty of ignoring or massaging this accountability issue in their own favour in the past. Though, if we had as I said earlier, basically an ICAC on steroids in Queensland, it would not matter what your particular burning issue is for this election or future elections, it would be taken care of with transparent, accountable procedures in place.

Spot on @YaThinkN. Ethical Govt serving the public interest is our goal. Fitzgerald Principles a beacon for #qldvotes pic.twitter.com/MDvZtZ0BMS

We have had “Business as Usual” for too long in Government at both levels. It has gotten to the stage where MP’s themselves seem to think that as long as something is ‘technically’ within the rules that is acceptable. Well rorting expenses is NOT acceptable, making policy decisions based on a donors big bank deposit into a political parties coffers is NOT acceptable. Hell, even making a decision based on pressure from a particularly strong lobby group, even if they have the best the intentions, due to worry about bad PR is NOT acceptable.

I urge all Queenslanders to ask themselves what they expect of their Government?  I am sick to death of the apathy, the attitude of “they are all as bad as each other” or “pox on both their houses”. If enough of us stand together to agitate for good governance as Mr Fitzgerald and others are urging in their “Four Principles” it won’t matter what your preferred policy issue is, or whether your favourite party gets in power or not, at least you would know that to the best of human ability, with all it’s inherent failings, that we would be:

“Governed for the peace, welfare and good government of all people within the state.”

Face it, can you really trust anyone who does not want to be Transparent, held Accountable or Responsible for the decisions they make on our behalf? I think we colloquially call those people who don’t believe in these concepts “dodgy bastards” and I'm pretty sure that is not the ‘sort’ of people we want making decisions in Government for us?

Best Wishes,
Noely
PS.  A Hulk like ICAC on steroids would be of massive benefit Federally as well, just saying ;-)

Disclaimer: Yes, I am unashamedly a fan of Tony Fitzgerald. As a child of the Joh years, my first ever vote being the end of that era, the Fitzgerald Inquiry instilled in me a love of democracy and in particular, democracy being held accountable to its citizens.  Obviously my initial ideals have been sadly let down over the years by all forms of Government of both major parties, though I naively live in hope ;)