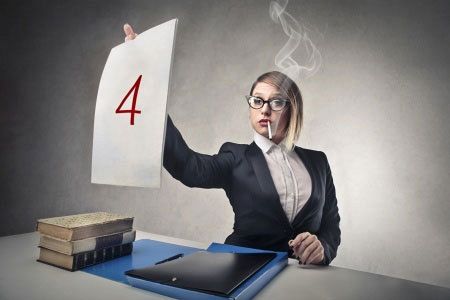 Real Life or Twitter, a Grub is a Grub

Everybody loves to bash Social Media, particularly Twitter, everyone from media talking heads, politicians & sportsmen to B Grade celebrities have had their say in print media & television decrying the nastiness that abounds on Twitter. I call Bullshit on that!

Everybody loves to bash Social Media, particularly Twitter, everyone from media talking heads, politicians & sportsmen to B Grade celebrities have had their say in print media & television decrying the nastiness that abounds on Twitter.   I call Bullshit on that!

The conversation is raging again about how awful Twitter is in regard to ‘Mark Textor quitting Twitter after death threats’.   The report doesn’t tell us whether Mark Textor reported these threats to the Australian Federal Police or even Twitter, it doesn’t tell us whether they were serious threats or ranting, regardless, I will not condone them obviously as that sort of behaviour is not acceptable in ANY form of communication.  What I will condemn, is the rubbish many are writing now about how feral Twitter can be and how nasty people can be to the ‘poor high profile victims’ in that realm?

Seriously?  Mark Textor is no victim.  He is an acerbic, nasty tweeter who likes to prove that he is the smartest man in the room at all times, and to be quite frank, I am surprised he has not been attacked like this before.  Pretty much, he is a nasty piece of work and Twitter will be improved without his divisive presence.

What media commentators rarely focus on is the fact that the likes of the Textor’s, Dugan’s & Dawson’s of this world, just to name a few, put it ‘out there’.  They love the PR they get on twitter, they love to brag about their followers, they love to toss out their so-called words of wisdom or Oh so important commentary, yet fail to remember that unlike their protected little polls & focus groups to get feedback, Twitter is happening in real time.

Now, I will admit, to me it seems that many will say things on Twitter that they would most likely not have said to a person’s face, that is the nature of the internet in general, it is not exclusive to Twitter.  Though, except for the teenage style cyber-bully, which is a whole other facet of the internet that people a lot smarter than me still can’t get a grip on, most who cry ‘victim’ on Twitter have normally only done so because Twitter has turned on them.

And Twitter can ‘turn’.  Point is though, except for the rare troll that goes looking for trouble, and they are rarer than media would have you believe, (Not to mention you can always use your trusty digit to BLOCK) if Twitter turns on a particular High Profile Tweeter, there is normally a cause & effect situation here.  For some odd reason these people feel that they should only ever receive adoration on twitter?  They are happy to retweet a particular comment, they love to chat in their little rarefied cliques (similar to the cool kids at school), knowing that these conversations are public, just so the rest of us plebs can read and bask in their witty repartee.  Fact is, Twitter is not TV, it is not a Newspaper, it is not one-dimensional.

The Celebs (and some are not even real celebrities, often they are twitter created ‘names’) who want to be legends in their own lunchbox on the likes of Twitter yet never actually interact with any of their followers in any meaningful way, will, in nearly all cases be pounced upon as soon as they make a mistake.  The high profile Tweeters who do actually interact with the hoi polloi don’t tend to be judged as harshly, in fact I have often seen many tweeters come to the defence of a particular journalist who may have stuffed up & then apologised for example.  The difference being, that particular Tweeter has treated other tweeps with respect.  You may have an awful lot of followers and not be able to respond personally to each, but even making that effort to interact is respected on Twitter and unlike the tossers who think their poo doesn’t stink, will normally result in less abuse & more support in the case of abuse.

Yes Twitter is akin to yelling at the TV screen on steroids.  Yes many keyboard warriors will be a lot more aggressive on twitter than they ever would in real life.  But, just like real life, the flipside is 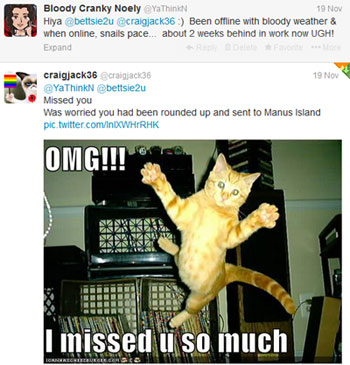 that you will meet many who you enjoy chatting with - I don’t just mean the political echo chambers that reinforce your own views – you will meet people who due to different life experiences, ages, education levels etc. That will actually improve your knowledge and social interaction just because you have randomly met these particular tweeters.  In fact, after being off Twitter for a number of days due to next to no internet access from storms (the perils of living in a regional area with crap internet that has no hope of being improved, looking at you Warren Truss & Malcolm Turnbull), I was so humbled that one friend actually phoned to see if everything was ok here & when I did get back online, had too many people tweeting me welcoming me back that it was difficult to respond to everyone.  That sort of behaviour on Twitter is NEVER reported in the media?

Basically, next time you hear a so-called High Profile person bemoaning the ‘zoo’ that is Twitter, consider the real life scenarios:

The smart high profile people know and appreciate they are in the public eye, even on Twitter & act accordingly, just like a Shopping Centre PR meet & greet, they are not going to be rude to a punter.  Some of the cannier ones even use Twitter, they know who they are, the ones that will toss ideas or questions out there and often after the fact, you will see a piece in the paper with some of that feedback they received incorporated.

Just like real life, Twitter is what you make of it and who you surround yourself with.  If you play in the gutter you will attract grubs, if you stick your nose in the air and denigrate others, well, ‘tall poppy syndrome’ is an understatement as to what will happen to you at the sniff of a stumble.  Though, you treat others the way you would like to be treated, you will receive it in return.  I have rarely had to block anyone, have only ever been blocked myself once (totally unjustified & that is another story), and have found that even with the touchiest Tweeters, if you explain yourself at the merest hint of offence, ie. “My question was just a question, not a challenge”, you will find great discourse.

Unless you are a TV Show handle or the likes of the Police, it is NOT interaction to have thousands of followers yet proudly only follow a few yourself?  All you have done is surround yourself with sycophants of the Kardashian fan calibre and are a legend in your own lunchbox only, so don’t cry foul or ‘victim’ when you stuff up.  Your mates in the media may give you tea & sympathy but the likes of Social Media will only increase over the years, so if you want to survive as a high profile personality into the future, maybe you need your ego to adapt?  It may not be Twitter in ten years time, but it will be some form of interactive online forum that will help you with your public profile?

The likes of TV personalities happily promoting their TV Shows or Journalists tweeting their pieces, having their work reach a far wider spread, increasing their ratings & online clickthroughs (and therefore advertising revenue for their bosses) need to have a bit of a rethink about their snobby attitudes?

As punters become more savvy, into the future they will not ‘promote’ you on social media for nothing, at the very least they will expect that they are NOT treated like serfs to adore & do your bidding, we see that already with many who will not retweet particular publications and after two decades in IT, I can only see this increase in knowledge in regard to the ramifications and personal power that plebs are slowly understanding they have in the realm of social media increasing?  If Celebrities of all forms want to ensure that they still have that High Profile in the decades to come, 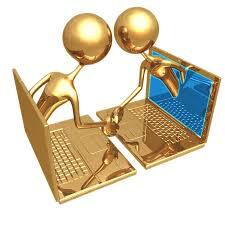 maybe it is time to either educate yourself as to the intricacies of social media interaction to capitalise on it, or just get out of the kitchen if the heat is too much for you?

Twitter is not any worse than any other form of Social Media and basically just like real life, if you act like a dickhead, tosser, princess etc. You will be responded to accordingly.

Cheers,
Noely
PS. It is not hard to be a decent human being :)