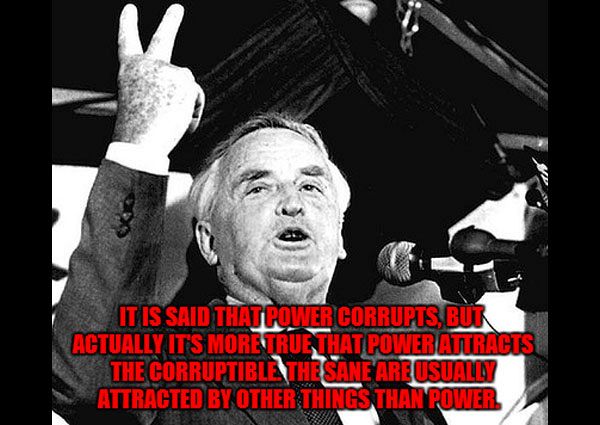 Thanks to @craigjack36 for yet another apt graphic :)

In the last 12 months it has come to my attention that a seriously large percentage of the population of Queensland have very little knowledge of the history of Queensland, particularly our political history.

In our office alone, my husband arrived here as a teenager in 1989, Leone arrived here from Victoria a decade ago, Tane only arrived here in 2004 from NSW, therefore myself & Pat are the only persons born and raised in Queensland.  Asking around, this is not an unusual situation, particularly on the  Sunshine Coast, which I suppose is why when Mr Tony Fitzgerald AC QC raises concerns about our political processes I listen, yet others don’t care nor pay heed to his words, most likely because they don’t understand the historical context behind them.

This is a worry, as Queensland, unlike other states in this country does not have an upper house such as a Senate, this is called a ‘Unicameral Legislature’, again, a terminology I have found in recent times, is unknown by many in this state.  The Australian Labor Party actually abolished our ‘Queensland Legislative Council’ (upper house) way back in 1922 (Yeah thanks for that ALP NOT!).  A single Legislature results in a winner takes all attitude to governing regardless of which party wins the majority of seats in Queensland State Parliament as there is no Senate back stop and therefore the population has no opportunity to take an each way bet as tends to be our nature in Federal Elections.

Regardless of any so-called consultation a Queensland Government may have or discussions about who votes for what in Queensland State Parliament, at the end of the day, our political system means that if you have the majority of bums on seats in our Parliament you can change whatever you like as you will always have the numbers and no opposition can ever stop you.  To ensure a unicameral Government cannot be corrupted (as it has been in the past) it is imperative there are accountability procedures in place to buffer this power to a degree.  Until recently, the latest incarnation of these safety guages was the CMC & PCMC.

Many in Qld have no idea why we had the CMC & PCMC, what they really did or why they are important.  Sadly, I don’t think the media are assisting in this knowledge for people who were not around back in the Joh era to understand that these procedures were put in place as recommendations from the ‘The Fitzgerald Inquiry’ which started in 1987 as a ‘Commission of Inquiry into Possible Illegal Activities and Associated Police Misconduct’ and ended up rocking the entire state, the police, our politics and to a lesser degree our legal system.  They were instituted so what had happened during the Joh Bjelke-Peterson reign from 1968-1987 could not be allowed to happen ever again.

In a nutshell, under proposed changes, the Government of the day can stack the PCMC should they choose to do so with a majority of members of this committee, thereby deciding what will be investigated or not, opening the door for corruption as obviously an LNP majority PCMC are unlikely to investigate a complaint against themselves.  Conversely, once this law is in place and the electoral cycle changes again, as it will in the future, the ALP themselves would also be loathe to investigate a complaint against themselves either, in fact the likes of the ALP’s Gordan Nuttall may not have been jailed had the system the current Government are proposing been in place back in 2010?

I was very happy to see Tony Fitzgerald raise his head again and more importantly, to see that he had made a submission in regard to the “Crime and Misconduct and Other Legislation Amendment Bill 2014.” which I urge you to read.  Point 10 in Mr Fitzgerald’s submission may be the crux of the problem here as to why our current Government does not think the changes to the CMC are dangerous:

“10. In contrast to Sosso, neither of the Bill's principal public proponents, the Premier, Campbell Newman and the Attorney-General, Jarrod Bleijie, experienced life in Queensland when criminal politicians and crooked police ran the State. Newman did not arrive in Queensland until 1993.  Bleijie, who was born in 1982, was a child in his early primary school years when the Inquiry reported in 1989. It seems unlikely that he followed its revelations between the ages of 5 and 8.”

Seeing comments in the online version reporting “Tony Fitzgerald slams Queensland government's CMC reform plans” has displayed to me that many in this state have forgotten the Fitzgerald Inquiry, or alternatively, have no knowledge of it.  Quite a few seemed to think that there was no reason to listen to some “old solicitor” :(

I can assure you, it is very important that we listen to this particular ‘old solicitor’.  The submission Mr Fitzgerald did is not very long and if you are unaware of Queensland history, please, I beg of you, read it!  To use our PM’s phrase, Premier Campbell Newman and Attorney-General Jarrod Bleijie may be “pure of heart” in their reasoning for these changes, they may not abuse the power, but what about the next Premier?  What about the next Political Party? What about if we have a future political party that ‘buys’ it’s way into power?  What if a media oligarch uses his power to purchase our Govt?  What about a future Premier who wins an election based on a Natural Disaster that frightens the hell out of the population and results in draconian civil laws?  NO-ONE can predict the future.

As a child of the Joh years I always look at legislative changes through those eyes.  In a perfect world our elected Queensland representatives would do the right thing by this state and reinstate an Upper House so that NO party could rule absolutely without power in both houses. A vote in Parliament is a ‘process’ in Queensland, if you have the numbers you can change what you like.  This is why at the very least a bi-partisan CMC & PCMC is imperative to ensure that this power is NOT corrupted.

Note from Noely: “Since you do have the numbers and can change whatever you like, use that power for good by changing the law in regard to the exorbitant pay rises that do not ‘fit with community standards’, you do have the power to do that?”

I hope you have read this far and take this up with your local member.  It doesn’t matter if the party is Country Party, National Party, Labor Party, LNP, Green or a future Queensland Beach Bums party who rule Queensland, our political system and it’s Winner Takes All outcome means we should NEVER be apathetic about buffers like the CMC or PCMC in this state.

Update: After finishing this piece last night I saw “Hearings putting state's finances under scrutiny to be changed” , this is another change which should NOT be made, it again weakens the ability to scrutinise a Government which already has extraordinary power rare in a Democratic country.

Thank you for taking this trip down memory lane with me,
Noely
The MSC Editors Desk
Originally published as MySunshineCoast Editorial
There is plenty of literature available both online & offline in regard to the Joh years and the Fitzgerald Inquiry, though I have just finished the 2nd instalment of Matthew Condon’s series, "Jacks and Jokers" (1st part was “Three Crooked Kings”) which delves into this murky period and I can thoroughly recommend as a great ‘True Story’ read.
*statement is normally attributed to Lord Acton, though still debated to this day by various linguists & historians.