#Qldpol is a mess & it is power hungry politicians at fault 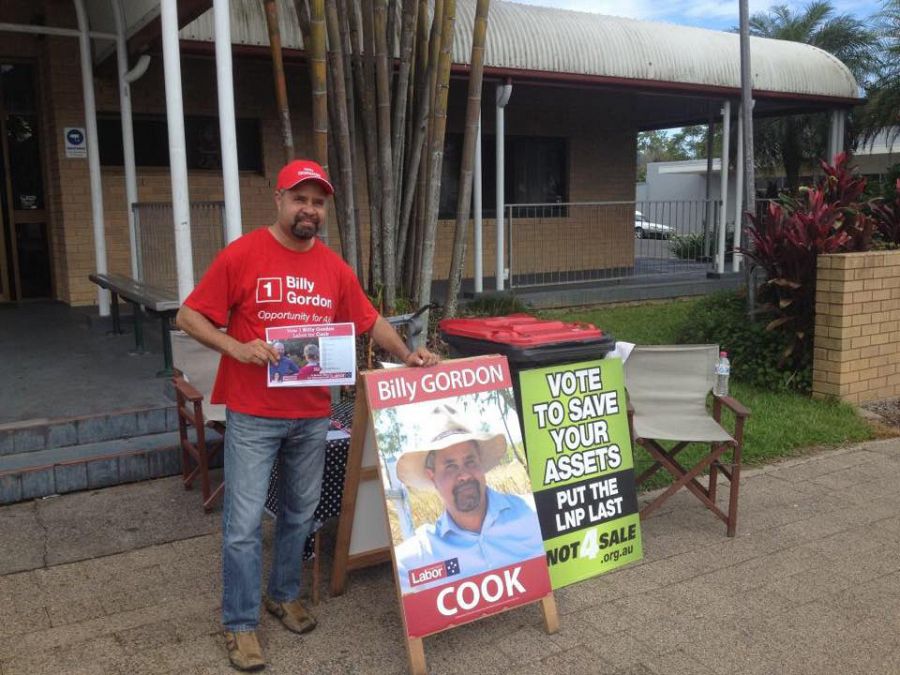 Graphic: Billy Gordon at pre-poll in Mossman from his Facebook page. Mr Gordon has addressed the allegations himself a number of times here so please visit https://www.facebook.com/BillyGordonforLeichhardt to read his own words.

With all the screams of “chaos”, “Queensland Government could fall”, “When did Premier know”, etc . etc. What everyone, including the media seem to forget is that there are real people behind the headlines? Billy Gordon, the member for Cook, is a ‘person’, his ex partner, who the Qld LNP have happily used to further their own power play by raising domestic violence claims in Parliament last week is also a ‘person’ that has been forgotten about in this saga.

This is a very messy and confusing issue, made worse by the minority government that we have in Queensland, which I will remind you, only actually had their first sitting in Parliament last week. If anyone thinks the LNP raised this issue because they ‘cared’ about the state of mind of an ex partner alleging domestic violence many years ago, well, I have a bridge to sell you?

Domestic Violence is always considered too hard to deal with by Governments of all flavours.  Domestic Violence is not a toy, it is not something for Politicians to use to try to overthrow a Government just so they can get their hands on power? In fact, it is rather repulsive that a party is attempting to do just that.  For a few facts behind this issue, read “Domestic Violence Is Not a Political Tool” by Ross Bowler, a Queensland Barrister.

Queensland may have a messy state Government for a tad longer yet? Though, the biggest issue here in my opinion is how domestic abuse is being used for political gain and the lost opportunity for Aboriginal kids to have an inspirational example.

From what I can gather the Domestic Violence allegation dates back a number of years. This represents a few awful scenarios and depending on your politics is how you will look at.

Many domestic abuse victims don’t come forward for years, hell, it took me over two decades to even admit I had been a victim of domestic abuse, this is not uncommon for many reasons that domestic violence advocates have tried to address over the years. So this may be the case in regard to Billy Gordon’s ex partner. Sadly, the fact that it was the LNP raising this issue, rather worries me that this woman may be in a situation where she is being used for political purposes? I have heard a lot of yelling by the LNP as to “when did Premier Palaszczuk know about this”, though have heard NOTHING as to whether the Qld LNP went to the Police prior to their grandstanding in Parliament? Nothing, as to what support they offered the ex partner? Is Billy Gordon’s ex partner getting any support at all from anyone??

The flipside of an allegation like this coming out so far after the event, at the convenient time when it can have an effect on a Government politically, means that many who only care about the ‘game of politics’ will automatically assume that it is just too convenient?

Mr Gordon had a Federal run in 2013 as well as working for a Senator so there have been past occasions where this could have been raised, yet, it has not?  For all we know, maybe Mr Gordon’s ex partner had tried to rise this before with powers that be, we don’t know, yet the very fact that we don’t know and it is only happening now means that the rabid team ALP automatically surmise that it is a ‘stitch up’ to bring down the Palaszczuk Government?

This is an absolutely horrible claim, regardless of the validity or not of it, as it harms every single domestic abuse victim who finally, after years of uncertainty, bites the bullet to name the abuser. Sadly an issue that no-one in the media nor Government seem to be too concerned about?

The other serious issue here is rehabilitation of a person

In Queensland we have the Rehabilitated Offenders Act, in my opinion, one of the few good legislature changes the previous LNP Government introduced. In a nutshell, anyone who has been charged with a crime, spent none or less than 3 years in prison & didn’t re-offend has their record cleared after 10 years. This is a good thing. How many of us could look at our younger selves and see the same person decades later?

If you read Ross Bowler’s piece you will see that Mr Gordon’s criminal offences (the main reason why he was sacked by the ALP for not disclosing) date back to 1987-1999. The fact that he was able to turn his life around and actually become a member of Queensland’s State Parliament should have been a good news story. The fact that he is an Indigenous man from Northern Queensland where as Amy Remeikis reports Indigenous Leaders are still wanting to know why “decades of being ignored, tales of disenchanted youth with nothing to do and worse, nothing to believe in” continue? Taking this into account, Mr Gordon becoming an MP should have been a bloody brilliant good news story.

Billy Gordon could have been an inspiration for these kids? The kids who have been picked up for petty crimes, stuff like break & entering and think they can never achieve anything in life could have had a real life example of how you CAN turn your life around? For disaffected youth who fall into trouble and think, “well, hell, I have already stuffed up, may as well continue as no-one will ever give me a chance or take me seriously in future” could have seen that the defeatist attitude was not true.  Problems in your past do not have to shape your future. The superficial reporting of the issue will just reinforce what the Indigenous Leaders are worried about in their communities.  Many kids will see this Billy Gordon drama play out and think:

"don’t bother trying to straighten yourself out, the hard work won't be worth it as past crimes will just come back to bite you on the arse when your life is starting to look good, so is a waste of effort"

I have no idea why Billy Gordon didn’t come clean with the ALP during pre-selection? Maybe he thought that as the Police check by the AFP cleared him in 2013 he was not obligated to disclose past transgressions to the ALP? I also have no idea why he didn’t again when pushed on the issues earlier last week by the Premier & her Deputy? The shame of it is so much sadness and worry could have been averted for himself, his family and his ex partner if he had? Hopefully he will make some good decisions with even better advice in the near future as I am sure he doesn’t need the circus to continue, for him, his family or his community.

Another thing while I am on my rant, instead of just looking at the “OMG Queensland’s Government could fall over” hyperbole, let’s get a few facts straight...

For starters, Billy Gordon has not been sacked due to allegations of domestic abuse.

He was sacked from the ALP for not disclosing previous criminal record and then for supposedly lying to Premier Palaszczuk & Deputy Premier Trad when they asked him about the disclosure and if there was anything further he needed to disclose.

For those screeching about poor ALP selection processes...

Yes maybe they could have looked harder. Though considering all candidates have a Police Check done on them by the AFP no less and they cleared him, well, why would you look much harder?

Billy Gordon has been sacked from the ALP, not the Government.

People seem to think we will be going back to the polls soon. This is not a dead certainty. Yes, Mr Gordon broke the ALP rules so they had every right to sack him, but he is still an MP, just an Independent one. He may decide the situation he is in makes it too hard for him to be an Independent MP and he may resign causing a by-election in Cook.  Were the LNP to win that hypothetical by-election it could change the Government? If no adverse findings are uncovered by the Police investigation, he may not be forced to resign from Parliament at all and may decide to fill out his term as an Independent? Obviously if Police do find that allegations against Mr Gordan do stand up, he will be charged and being forced to resign from Parliament will be the least of his problems and rightfully so. As it currently stands though, Mr Gordon still deserves due process as a Member of Queensland Parliament.

I may not like the result, though have to admit I am happy to see Premier Palaszczuk act so decisively even if it risked her losing Government. What I am not happy about is that we have not heard from either party if the ex partner is being counselled by anyone? Nor have we heard if Billy Gordon is being counselled either?

Governments come and go over the years, politicians rise and fall, and ‘people’ tend to get lost in that process. I just sincerely hope that no lives are destroyed here, irrevocably changed forever for the worse, just for the sake of savvier political players ambitions?

PS. The AFP have some serious questions to answer here. They have been one of the big pushers for the Data Retention laws, yet failed to uncover these past legal issues with a political candidate? That is a big worry and we are yet to hear exactly why that happened - why Billy Godan was cleared by the AFP not once, but TWICE?

More to this Issue which could change who runs Queensland:

If you find other updates you think belong, please toss in the comments below or contact me :)