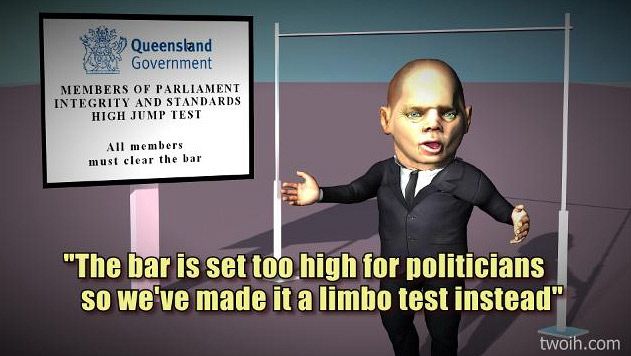 Qld LNP will win #QldVotes. Why is this so?

A recurring theme has been, why are the LNP favoured to win the Qld Election when there has been so many broken promises, poor MP behaviour, some would say corrupt decisions and Queensland’s economy is worse than when they took Government? Or shorter: “How Stupid Are Queenslanders?”

On the weekend I went on a #StrongChoices rant. The Qld LNP were having their official launch and the number of ‘Strong’ tweets drove me a little batty, hence the twitter rant on the sort of ‘Strong Choices’ this Government had actually been making.  Robin Price (@robinaprice) did a good backgrounder on this with “How are those 'strong choices' going for Queensland?” and the reason I mention it is that many, non Queensland – and even a few Queenslanders – were horrified by some of the ‘choices’ made by this Government.

A recurring theme has been, why are the LNP favoured to win the Qld Election when there has been so many broken promises, poor MP behaviour, some would say corrupt decisions and Queensland’s economy is worse than when they took Government? Or shorter: “How Stupid Are Queenslanders?”

We don’t need no fancy ejamacation

I don’t mean uneducated, just poorly educated about our actual Government system here in Queensland. Many are unaware we are a unicameral Government and the dangers associated with that. It has been many years since the Education department took Civic education seriously in regard to teaching students the Government systems in place. Worse, the massive growth of the Queensland population has resulted in not only a vast number of citizens unaware of our unicameral system, but more importantly, a vast number who are unaware of Queensland history. A history that clearly displays how open to abuse and corruption a Unicameral system can be, as the Fitzgerald Inquiry in response to the excesses and corruption of the Joh Bjelke-Petersen Government illustrated. This failure of knowledge leads us down the path to repeating that history.

There is a very good reason that those who were around in the Joh years quite frequently use #HereWeJohAgain as we recognise history repeating itself.

Joe Blow & Jill Dill are kept in the Dark

Queensland has one major state paper, the Courier Mail. Initially it started quite well with the Newman Government, it was tracking if promises were being kept. Changes in management resulted in changes in attitude at the paper and it is now rare to see an article that is even slightly holding the Newman Government to account. It is hard for a public to be unhappy with links between political donations and favourable Government decisions when they are not aware that it is even happening? As is usual, most nightly news will also follow the lead of what the Courier Mail has decided is the ‘big news’ in Queensland, further extending the reach and further doing a disservice to the Queensland public.

SCANDAL should have been a prominent word used in the media in the last few years regards this Government. There have been many that should have had the media screaming for MP’s to be summarily sacked – with by-elections held – the Premier made to stand down and in fact the Government publicly shamed, these are just a few:

Mining, Mining Mining... I won’t even start on the people and money involved in Natural Resources cash for approvals. From the Adani donations getting favourable approval for largest mine in the world – bugger the Great Barrier Reef who needs it anyway? To the most recent Acland CSG expansion, quietly approved just prior to the election – after promising that no decision would be made until after election – who, you guessed it, are another company that made a 6 figure donation to the LNP. These types of cash for approvals decisions really deserve a full Royal Commission all of their own as the 2 examples I mentioned here are just the tip of the iceberg :(

This type of situation has happened over & over again. The list is very long of wrongs that have barely gotten 30seconds of coverage. The average punter who between family & work maybe only half-heartedly watches the nightly news while they make dinner is totally oblivious to most of the irregularities of this current Government’s actions. Therefore, now that it comes to voting time, how can they judge them on it?

Fun Fact: Last time we had a Government vs Bikies war in Queensland was the Joh years ;-)

Government dodgyness MYEH! That is boring for the media, but gee, the hyped up OMG Bikies, now that is right up their alley, they don’t even have to bother writing their own copy for it, the Government has done it for them. The little known fact – and believe me it is little known – “that Outlaw Motorcycle Gangs commit about only 0.6% of overall crime” in the state is neither here nor there.

The average Queenslander has been conned into thinking that Bikies are the biggest threat to safety and security in Queensland. There is nothing more heartening than hearing a Scottish couple – who have only lived here 6 years – praise the Newman Government for keeping them safe, in Buderim. Buderim for FFS! Do a bit of googling, not a hope in hell you have an issue with bloody Bikies in Buderim?

As a side note, the real threat to safety in this state is Family Violence, clearly illustrated by Betty (@bettsie2u) in her extremely illuminating piece "Silence on Violence"

So while the Government has been backdating legislation for political donors, over-ruling our Independent Judiciary, killing off the PCMC/CMC and making themselves unaccountable lords of Queensland, the media has focussed on the so much more exciting beat-up of “OMG Bikies...”.

The ALP have not really offered anything outstanding to attract the public’s attention. I am not blaming them for that, I mean, if they are going to be responsible, try to pay down the debt without flogging the farm, well they can’t exactly run around tossing out bribes to the electorate willy nilly. Having said that, they also haven’t really taken a strong enough stance on things like the massive mining developments that could harm the reef, reinstating better accountability, or as Betty mentioned, strongly decrying VLAD rubbish to focus on real crime in the state? Nothing has really stood out in the campaign so far that is a winner to negate the sins of the past.

I know many ALP fans will not like this, but, fact remains that the previous Government at the end of it’s long tenure, deserved to be kicked out of Government. They had gotten arrogant, forced Council Amalgamations, made some dubious decisions in regard to water security, wasted a shipload of money on fiasco’s like the Health payroll system and last but not least, decided summarily that they would sell our Assets to fix up the bottom line.

This is where it gets really tricky in Queensland... If proposing to sell Assets was the final straw which resulted in the ALP being removed from office, in historical proportions, why does it seem safe for the LNP to raise the same, albeit slightly massaged Asset ‘leases’ issue as a good idea?

I know this sounds silly, but when Queenslanders woke up to a sea of LNP after the last election they nearly shit themselves. Yes we were cranky with the ALP, yes, we deserved to send them a message, what we didn’t know, was that our neighbours were thinking the same thing and it got totally out of control. LNP candidates who no-one had ever heard of and were only tossed in electorates to make up the numbers actually got elected. This resulted in many in Queenslanders looking at each other & pretty much saying, “WTF! Have we done?”

This experience means that they are more careful this time round and even though the ALP were burned by the backlash experience, unfortunately that caution to be less extreme this time round will burn them yet again, giving the LNP more wriggle room and less ire in the mind of voters than they actually deserve.

There could be more reasons and I am sure that there are, political pundits more educated than me will I am sure be giving us many reasons in the next year or so to come as to why a Government which did not deserve to win Government, thinks it has a mandate because it did actually scrape over the line?

This mandate will mean we have given the green light to Asset Sales (they can call it what they will it is the end result), no transparency, no accountability, more misuse of Police resources, more public service sackings, more curbing of civil liberties, more unemployment, more Government decisions based on political donations and sad to say, more corruption.

The media and political commentators will finally catch up with it at some stage, we will have all sorts of ‘reasoning’ as to how Queensland ended up with #HereWeJohAgain.

Though unfortunately as pointed out in Brisbane Times today, “Queensland Election: Prominent Australians demand transparent government” the LNP are not interested in accountable Government and it will be far too late and the damage already done by the time punters are actually informed of this by the media.

I hope I am wrong, I hope that the final weeks of the campaign will result in media focussing on say...  “Mermaid Rays quite obvious financial gain conflict of interest, not his bizarre chicken dance” and the public will make better decisions, sadly, I’m not holding my breathe. It really could just be that too much of a good thing regards weather & sun really has just made us Queenslander dumb :(

Cheers,
Noely
PS: I have not even scratched the surface on issues with this current Government that should have had media screaming for MP's, Premier and more to be sacked, so feel free to add your particular favourite SCANDALS to the below comments ;-)