Punters are the Biggest Loser in the Game of Government 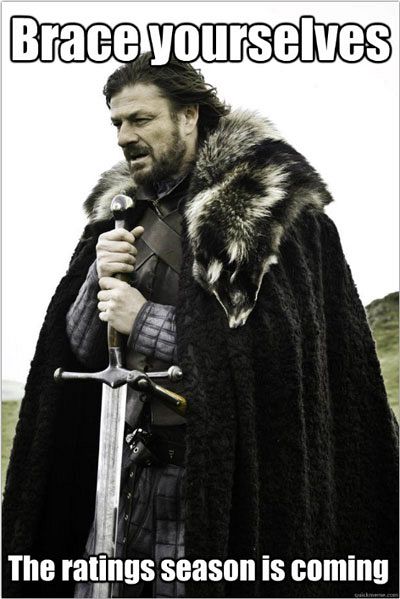 On the weekend @Drag0nista wrote a very good post that unfortunately did not get the attention on Twitter that it really deserved called “The voter doesn’t always know best”.  In fact I would go one step further than Drag0nista and say that the voters, in general, actually don’t give a shit at all.

See...  the ‘Game of Government’ has really gone off the boil.

We the vast unwashed no longer see Government as a ‘serious’ entity, it has become a reality TV show produced by the Australian Media, presented to us on a 24/7 basis, selectively edited to entertain and promote studio favourites.  We all know that the documentary, though of a much higher quality in factual presentation, will never rate as highly as drama & comedy.  As long as we are ‘entertained’ who cares about being ‘informed’?

This shallow presentation of Government from the media and Government themselves, has resulted in a public that no longer takes civic responsibility seriously and in many cases, have just turned off, not being partial to reality TV.

Which came first the chicken or the egg? Jill Dill & Joe Joker being busier & more self-obsessed may be why the Game of Government has been dumbed down for public consumption?  Alternatively, the sensationalism and repetition of storyline in the Game of Government could have resulted in Jill Dill & Joe Joker’s disdain and lack of interest?  That is for someone a lot smarter than me to work out...

Back in the day, the ‘Game of Government’ was not just entertainment; the ‘public’ was actually a stakeholder in the production, as shareholders, our votes actually mattered.  In recent years there has been a takeover by ‘Lobby Groups’ and ‘Industry Stakeholders’ pushing their own vested interests.  Sadly, quite a few of the actors in Australia’s most popular drama have seen the opportunity to pander to these groups, resulting in larger roles.  Of course with such a large ensemble cast, competition for the starring roles is intense.  A lot of work behind the scenes, consulting with the money men, fan clubs and publicists are now a necessity to get more face time in the show.  To the public’s detriment, this means that the original shareholders of Game of Government, have been relegated to the sideline, only requiring attention in ratings season.

Lets look at a couple of pivotal episodes in this show ‘The Game of Government’:

2003 season:  The great land of Australia goes to War
We had King Johnny of Kirribilli send us to war against the evil province of Iraq as part of deal he had made with his great ally King George Dubya of the great land of America.  The peasants were not happy with this move at all.  Not to worry, writers came up with ‘Dragons’ the ultimate Weapons of Mass Destruction threat, phew, that succeeded in getting the viewers onside, nothing better than ‘a fire breathing dragon’ to make the viewer forget they hated that particular storyline.  Too late we found out that the Dragons were actually just skinks...

2010 season:  The Red Queen skewers King Kev
Wow! Brilliant move by the writers, caught everyone by surprise, no-one saw this plot shocker coming.  Unfortunately after the initial high ratings for this storyline, viewers decided that it was actually pretty un-Australian to stab someone in the back, we prefer fair sword-lay and thought that since we have voted in King Kev for the Gold Logie that should have kept him in the starring role.  The producers deciding they had a bigger star, shows the lack of pre-screen testing on this storyline.

Now we are into our 2013 season of Game of Government and rating are really suffering.  Viewers are turning off in droves.

It has been many episodes since we have seen any peasants being featured at all?  Every episode has been exclusively about the war between the Red Queen & Prince Tones.  The producers of course have tried to inject some good old-fashioned intrigue.  With the now deposed Kev plotting the Red Queen’s demise in the background.  We have had the Court Jester Mal Turning Balls interjecting whenever it is inconvenient for Prince Tones.  Then of course there is the cunning cruel Queen of the west (who is pulling strings but not the leader),  though these characters are not really believable enough to the peasant fans to keep us tuned in.

In fact, in this most recent season, it has become patently clear that the producers have extended the contract of ex-Friar now turned Prince, Tones.  Unfortunately for the Red Queen, she is being written out of the show.  The town criers are not giving her much voice or chance to improve her popularity with the peasants, so a fan revolt is not likely to save her.

We had heard rumours the show had been sold to a rich manipulative Lord over the great sea in the land of America, this could be true?  In recent seasons the repetition, simplifying of storyline, hyping up of fight scenes etc., have all ramped up, at the expense of good quality drama?  In fact, the massive increase in advertising during recent episodes seems to confirm this.  Many fans are wondering if the Red Queen, who sent her chief Censor on a quest to stave off this invasion is going to improve the ratings, as it would bring the peasants back into the storyline?  The many plots at court seem to indicate this is destined to failure and the peasants will be further excluded from the storyline to the point where the Producers have written the peasants out of the show entirely as redundant?

Quite a few punters are still fans of the Game of Government, unfortunately, not enough to change the direction the producers and actors are going in.  More often than not Jill Dill & Joe Joker would prefer to watch Kitchen shows as quite frankly, they can relate to them more.

The reality show that is Game of Government has forgotten about it’s audience and is no longer reflecting what the audience wants or needs, preferring to advance their own careers & push their own storylines & plots.  At the moment, just like in the ratings off-season we are still watching the Game of Government, as basically, there is not much else on, the cricket is crap and the footy seasons are only just starting.  Though once they kick into full gear and a plethora of new shows hit our TV screens in months to come, the Game of Government will become irrelevant to the masses and only achieve ratings in a few selected fan forums and of course, amongst the entertainment sector, getting Industry awards only.

I don’t know what can bring fans back to this once great show, maybe more local content?  Maybe chatting to the fans & finding out what they would like to watch?  All I know is that until the stars of the show are actually the “people’s choice” and the storylines are more believable, the fans will stay away. :(

What characters & storylines would you change, introduce, to re-vamp this current season of the 'Game of Government'?

Cheers,
Noely @YaThinkN
PS. Before any Game of Thrones fans yell at me for forgetting the most popular ‘Imp’, unfortunately I could not find an analogy in our currently political players.  As most fans know, the highly intelligent, scheming Imp actually has a heart of gold and ‘relates to the peasants’.  I am waiting and hoping for one to have the opportunity emerge...

WOAH! People we have a JobKeeper, but is it...

Give yourself the gift of 'doing a Morri...