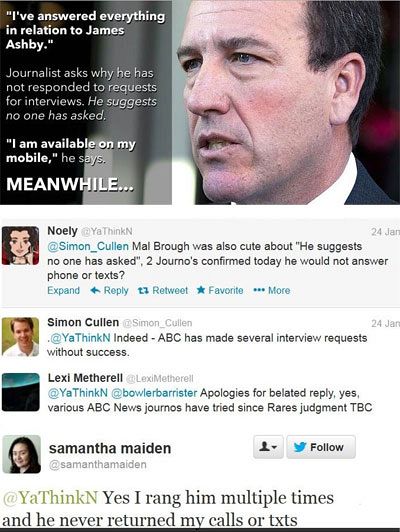 KieraGorden Kiera 25 Jan Journalists respond to Mal Brough’s claim that none of them asked to interview him about #AshbyGate #AusPol pic.twitter.com/l2iM7EPe

I am not a journo, not an academic, nor an expert on Government, but even a punter with a basic level of high school education can call bullshit on this Courier Mail report today by Peter Hall,· February 07, 2013 12:00AM, “LNP candidate Mal Brough sets up his office just metres from the shop front of current member for Fisher Peter Slipper”.  Of course I could be reading this wrong, will let you, other punters decide?

Yes the news that Mr Brough has set up shop next to Mr Slipper is interesting in a creepy sort of way, but what annoys me is the propagation of media massaged fallacy that this ‘report’ is serving the punter reading.  The concept that Mr Brough is promoting in relation to Ashby scandal “There is nothing to see here, move on...”   In general the Courier Mail is one of the better papers when it comes to facts, figures & general informing of the public, hence the disappointment.

2nd sentence – “Mr Brough won preselection...”  Hmm let’s have a bit of background in regard to the branch stacking claims against Mr Brough?  Though I can let this one slide as obviously there may not have been space in the article.

6th sentence – “We are already starting to help people who say they can't get through to him (Mr Slipper), or don't wish to.”  Really? Just how is Mr Brough helping people? Currently Mal Brough is just a punter that is putting his hand up saying ‘pick me, pick me’ in September?  He is not an elected official, he is not in Government...  Hell for all I know maybe he is giving counselling as he has no official capacity to do anything else?

10th sentence – “Mr Brough was linked to this when the Gillard Government accused him of encouraging Slipper staff to leak diaries.”  (referring to James Ashby drama).   Two points of order on this one...
A. Mr Brough was not linked to this scandal by the Gillard Government, he was linked to this scandal by the Federal Court of Australia, Justice Rares.  You may like to familiarise yourself with the judgement “Ashby v Commonwealth of Australia (No 4) [2012] FCA 1411”.  In fact Mr Brough is referred to 113 times in this judgment.
My second point of order here is in relation to ‘leak diaries’.  Not sure about you, but if I ‘encourage’ a staff member in a competitors business to STEAL & COPY pages of my competitors diary to give to me to gain an advantage, that is actually THEFT and pretty sure I would be in serious doggy doo should I be caught, as is the case here?

Much to my disappointment the journalist has not asked any pertinent questions of Mr Brough in regard to his involvement in this scandal.  I do not know of this journalist, though considering how hard it has been for others of his profession to actually get Mr Brough to answer his phone, this is such a wasted opportunity.  See graphic above, (larger version here), in fact more than just the journo’s on this graphic have  tried to contact Mr Brough, even though he was very very cute in an interview with the Sunshine Coast Daily where he suggested no-one had phoned him?  Mr Hall obviously missed the opportunity for a 'scoop' here, alternatively it begs the question, was not asking anything serious about Ashby a condition of the interview?

I would suggest that voters in Fisher and others concerned with the abuse of court processes and democracy actually visit the below for full information in regard to Mr Brough’s involvement in the Ashby scandal:
Independent Australia where David Donovan & Vince O’Grady (plus others) have spent hundreds of hours on this scandal linked to Mr Brough.  Interesting note is that Mr O'Grady has also referred this matter to the Queensland Police...
Australians For Honest Politics have also written extensively about this case led by the intrepid Ms Margo Kingston.
There may also be other online media who have reported on this scandal, though these two above come immediately to mind, please feel free to comment below if you know of others...

I will leave you with a favourite comment espoused by Mr Abbott for thought:  “It goes to a matter of character & judgment?”

Noely
@YaThinkN
Then again, I am just a ‘punter’, what would I know...  I seriously hope the article I take exception to here is just based on information given, as I know that Journalists, who are the professionals in calling Bullshit on politicians and potential politicians are interested in this scandal.  For all I know, Mr Brough may not have anything to answer to in this scandal, all the information may not have been put in front of Judge Rares, but until the questions are asked, we, the punters, don't know?

07 Feb 2013 Update: After this went out on twitter, many talking about Mr Brough not answering questions and Ms Emma Alberici from ABC's Lateline also confirmed as per the below that Mr Brough refused their requests as well for an interview:

07 Feb 2013 Update: Simon Cullen from ABC had interview with Mr Brough, view "Brough speaks on Slipper case involvement", unfortunately Mr Brough used 'weasel words' about legal appeal to not answer the question about the diary theft, though at least was nice to see someone in the media attempting to ask Mr Brough questions.
08 Feb 2013 - This article of interest was sent to me via Twitter, "Bringing back the Brough: 10 of the worst things Mad Mal did in office" I can't verify all the info here obviously, though it is something that maybe one of the media organisations which do have the funds and journalists should be seriously looking into?