Pulling The Wool Over Our Eyes 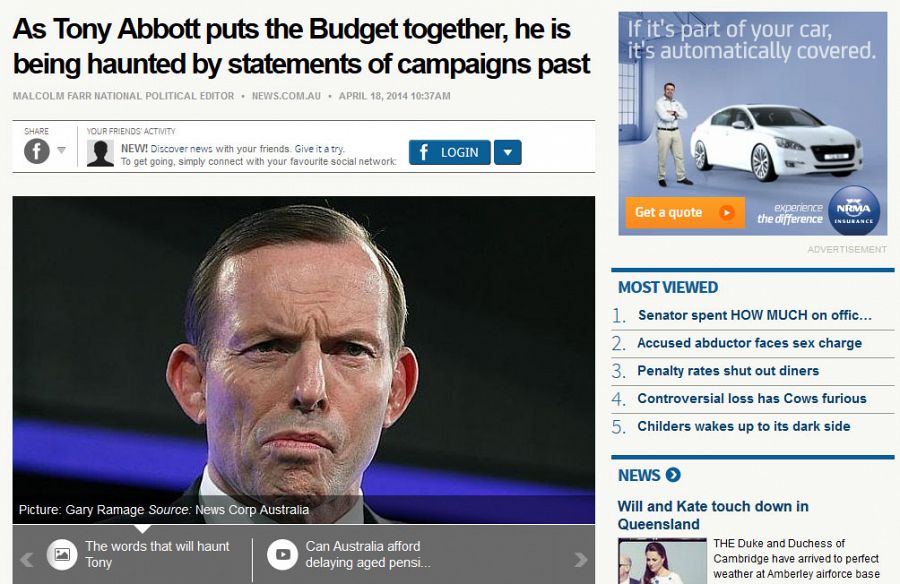 I read today a story in the courier mail online news. Titled - "As Tony Abbott puts the Budget together, he is being haunted by statements of campaigns past" MALCOLM FARR NATIONAL POLITICAL EDITOR NEWS.COM.AU APRIL 18, 2014 10:37AM

This is how I read it -
At a glance at the headline and layout, on the face of it, to the casual observer this would appear to be a story that is highly critical of the Liberal Prime Minister Tony Abbott.
The entire article consists of A Headline, inferring that the story is highly critical of the Prime Minister and TEN sentences with a whopping seven photos and a video of Joe Hockey.  Matching almost each sentence for the entire article with photos most of which depict the PM smiling and "engaging" in public, excepting three, which depict,  in order of appearance Clive Palmer, in extreme close up, a homeless person sleeping in the doorway of a business premises and Tony Jones from the ABC.  The video is footed by two further links. The first merely linking back to the same story but carrying a second headline that again implies the story is critical of Mr Abbott with "The words that will haunt Tony" and the second linking to the interceding video of comments by Joe Hockey the Treasurer which carries the headline "Can Australia afford to delay aged pension reform" blatantly inferring that obviously we cannot.   Each sentence including the headline is interspersed with a video  between the headline and the story of Joe Hockey and a photo for each of the remaining sentences.

Malcolm then goes on to say - "Those promises are cramping his fiscal style as the May 13 Budget nears, but they are not the only Abbott-isms the Prime Minister might regret using:"
At least Malcolm is admitting that they were promises but he also mitigates the severity of the PM's "LIES" by calling them "Abbottism's"? He further softens the blow by describing the PM's situation as "cramping his fiscal style". The reference as with the link pointing to the Hockey comments overshadows the severity of the betrayal by excusing the PM's, "Abbottisms" as nothing more than adjustments in policy that have had to be made due to the severe "fiscal crisis" in which the country has found itself. Presumably we are all expected to hear Joe Hockey and Tony Abbott's voices echoing in our heads at this point, screaming "Budget emergency" and immediately feel the anger towards Labor rising due to the "Booby Trap" this pair have openly accused labor of setting (to the point of Hockey allegedly fabricating a "Treasury report" to sell the slogan) and the media have ensured are well and truly brainwashed into our minds.

The other "Abbottisms" the article addresses are as Farr goes on to quote -
- “Compulsory paid maternity leave? Over this Government’s dead body, frankly.” (2002).
- “The science of climate change is absolute crap.” (2009)
- “I won’t be doing deals with independents and minor parties.” (August, 2013)
- “We just can’t stop people from being homeless if that’s their choice.” (February, 2010)
- “We will be a consultative, collegial government. No surprises, no excuses.” (July, 2013)
- “Misleading the ABC is not quite the same as misleading the Parliament.” (2000)
and the now forever Legendary -
- “No one, however smart, however well-educated, is the suppository of all wisdoms.’’ (August, 2013)
As damning a list of LIES, backflips and insulting positions as any politician could reasonably be expected to accumulate in a career in politics and public life. The sheer number and breath of subjects on which tony has been caught out contradicting himself on is astouding to say the least and this is far from a comprehensive list of them. In my opinion they point to a well established pattern of taking the most expedient view at the time to promote one thing and one thing only. That is, Tony's ascension in Australian politics.

Lets look at the quotes, Farr's comments and the attached Pics.
The  quote - “Compulsory paid maternity leave? Over this Government’s dead body, frankly.” (2002). is heading the first photo of a smiling Tony Abbott apparently talking to a cooing mother holding a baby. Hard to confuse the sentiment this is trying to portray. Let me just say it hardly evokes anger at the LIE when the mother is so obviously pleased to be there and "evil" Tony is smiling away like a benevolent father.
Farr's observations of the quote are that - "Mr Abbott has not only accepted the principle of maternity leave since — he wants to introduce the most expensive option Australia has seen, increasing taxes to pay for it while campaigning as a tax scrapping government."
Fair enough in so far as it goes but should we forgive Farr for inferring Mr Abbott has had an epiphany and now actually cares about working mothers when it's widely accepted that his PPL scheme is massively skewed in favor of the rich and remembering that the threat of taking the pension away from grandparents exacerbated by it's cost, can only result in many more parents having the essential and free child care assistance willingly given by these elders taken away?

The quote - “The science of climate change is absolute crap.” (2009) heads the next photo coincidentally (or is it) supplied by -  "Picture: News Corp Australia Source: News Limited" depictes tony standing between a woman and a guy who looks like a gardener or farmer, with the green plants filling the foreground of the shot. Is it just me or is that just a TAD patronizing?
Farr then says - "Whatever his views on climate change, as Prime Minister he is asking Australians to spend hundreds of millions of dollars on Direct Action, which in part would pay companies to cut carbon emissions".
Again Farr's comments appear critical and are, but the comment also makes the assertion that Tony's "Direct Action" would actually cut carbon emmisions. A position not  backed by many astute observers.

The next quote - “I won’t be doing deals with independents and minor parties.” (August, 2013) heads a third photo from guess who? - "Picture: Mark Cranitch. Source: News Corp Australia". This PIC is an extreme and not at all flattering close up of an open mouthed Clive Palmer. This together with Farr's next sentence which says - He may have to in order to get his Budget through the Senate, where in July he will have to deal with a crossbench (neither government, Labor, nor Green) of eight." Certainly leads one to the Implication that Tony has the unpleasant task ahead of him of doing deals with unrepresentative and flippant, billionaire, mining magnate independants like Palmer. I'm sure the independants could have been better portrayed if the true intent was to be scathingly critical of Tony rather than quietly forgiving.

The next quote - “We just can’t stop people from being homeless if that’s their choice.” (February, 2010) Also heads (is there a pattern here?) a photo by - "Picture: News Corp Australia Source: News Corp Australia" of a homeless person sleeping rough in front of a business doorway no less? The caption below reads - "The PM has since changed his mind about homelessness". And Tony's new found benevolence is again reinforced by Farr's words which state - "Mr Abbott has changed his views since then — accepting that those who are homeless by choice have deeper problems — but might be reminded of his old position should funds for the homeless be cut".

This paragraph is a disturbing rewrite of the facts made without even the premise of evidence nor a quote. It makes it's own conclusion - that "Abbott has changed his views" expecting or perhaps hoping that readers will just take this for granted and then goes on to tell the reader that the fact is " those who are homeless by choice have deeper problems ". It was at about that point that I decided to write a response! It further mitigates the already irreversible havoc foisted on low income earners by the Abbott regime (eg : The repeal of the new higher tax free threshold of 18k installed by labor back to $6k for people earning under $37k OR the repeal of the Super Co-Contribution for people earning under $33k just to name a couple) by attempting to infer that cuts to the homeless haven't already been made and that these decisions may still be on the table for discussion with Abbott having a favourable  viewpoint.

The next quote - “We will be a consultative, collegial government. No surprises, no excuses.” (July, 2013) heads a photo of Abbott I believe during the Pollie Pedal but I can't be sure. He certainly seems awfully happy about something (possibly getting paid almost $400 for his volunteering that day?) but I can't really see the connection to the quote unless it is about our surprise that he got away with the rort? The PIC - "Picture: Bradley Hunter/News Corp Australia Source: Supplied"
Farr says - "Well there have been some surprises — introduction of knights and dames for one — and the speculation is the Budget will have a few more. Mr Abbott also will be scrutinised for any excuses he might offer for not meeting commitments".
"Some surprises" might be the understatement of the decade even before the budget in May! The example of "knights and dames" is hardly the most damning thing Farr could have chosen to make his point is it? And telling us that the budget "might" contain "a few more" is like telling us the sun will rise in the east tomorrow. he did get one thing right though, Abbott will be scrutinized and I'm betting he will have excuses that will be more dismissals than reasons.

The second last quote - “Misleading the ABC is not quite the same as misleading the Parliament.” (2000) Lo and behold heads another pic, this of Tony Jones of the ABC and the footer -  ‘Oh, really?’ does a nice job thank you of making a joke of that on Tony's behalf.
What's not amusing at all, is Farr's comment saying - "Mr Abbott has in the past admitted to some relatively mild indiscretions with the truth but as Prime Minister he cannot be expected to be let off lightly for future examples".

Is Farr HONESTLY saying we should accept Tony's "BROKEN PROMISES" as "relatively mild indiscretions with the truth". Or That politicians can't be held to account for election eve promises if they aren't the PM?
The final quote in this saga, the dead set hilarious - “No one, however smart, however well-educated, is the suppository of all wisdoms.’’ (August, 2013) is quite tactfully not directly commented on by Farr (what could he say?). But News Corp dismisses it as a - "Bad. Verbal. Slip-up". IN THEIR CAPTION OF THE SUPPLIED pic - "Picture: News Corp Australia Source: News Corp Australia", with a picture of an amicably smiling Tony Abbott to leave us with a warm final impression and the last word thereby excusing as a slip up one of the most moronic and ill conceived comments in the history of interviews and certainly one that Julia Gillard or Bill Shorten would be hounded into Hermitage for making by the media with endless front pages of ridicule and derision and neverending lampooning  television couch references, not to mention the "intellectual" analysis of programs like "Insiders" "The Drum" and the ever irreverent and irrelevant "Bolt Report".