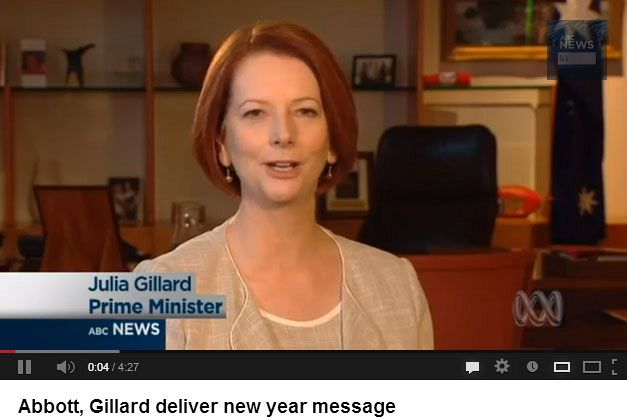 Not only is this equal billing wrong, the ABC have not even shown our Prime Minister enough respect to put her name first on this travesty of a New Year’s message video...

Back to the Twilight Zone...  It seems that it is now acceptable that whenever our Prime Minister addresses the nation, so does the Opposition Leader?  I am not quite sure when this started, though I did notice it at the ceremony when our Olympians came home and it is seriously not a good look!  A bit of googling shows that this has not been the norm in the past, nor does it happen in other countries?

I have asked Journo’s on Twitter, yet none seem to want to answer me.  I have also asked the ABC who put both speeches together “Abbott, Gillard deliver new year message” as though they were equals, and of course have received no answer.  So why the quiet?  Why does it seem to be that our Prime Minister is held not above the position of the Opposition Leader, as her office should expect but on an equal level?  Did this start when we had the hung Parliament and they were both jockeying for position with the Greens & Independents to see who would get the top job so media outlets gave them both air-time and have just carried that on?

The fact that I can’t get any outlet, Fairfax, News Ltd, ABC or the likes of Seven to let me know when this ‘joint speech’ business started is very concerning.  Are the media complicit in the fact that Tony spat the dummy about not winning and therefore they have been bullied into raising him to a position that he does not deserve?  Or, is it that everyone is so certain that the Liberals will win the next election that they are happy to give him equal billing to our PM to keep in good with him and his party for the future?  I am seriously hoping that scenario I just described is not the case, if it is, we are in a lot of trouble in this country in future with a media that we cannot trust to inform us without bias and self-interest as the priority for them?

I am hoping it is something that started when we were unsure who our leader would be and they have just gotten a habit of it.  If that is the case it is time to stop it!  Regardless of who is Prime Minister, as a respect to the office of Prime Minister we should only have the Prime Minister giving addresses such as Christmas and New Year, or welcoming home Olympians and Soldiers.  Our constitution does not even really acknowledge an Opposition Leader at all and unless it is the case of a debate, political response or the like they should not be given any sort of equal billing with the Prime Minister.

All media outlets, please, stop pandering to this ‘equality’ rubbish.  The offices of Prime Minister and Opposition Leader are NOT equal and should not be treated as such.  Outside looking in it is a joke, no other country does this, and we lose respect in the world when we do not show the respect deserved to our Leader.  This is not an each-way bet people, so please show some respect and stop denigrating the office of Prime Minister!

5.42pm 01 Jan 2013 - PS. Response after a few comments on twitter - "I am NOT an ALP member, nor vote ALP as a habit, I vote for who will represent my electorate's interests, the only political party I have ever belonged to was the democrats a long long time ago.  This article is about democracy and the office of the Prime Minister, not partisan politics."
Cheers
Noely
@YaThinkN