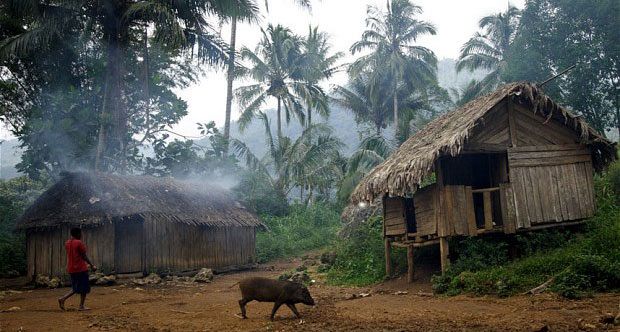 The people of Papua New Guinea struggle enough with their own issues, toss refugees into the mix...

I'm all out of faith, this is how I feel...  I may be cold, not naked on the floor, but I am shamed :(  I know Natalie Imbruglia's song was not about Asylum Seekers, but gee, at the moment, a lot of those words & emotions really resonate for me.

I will admit, the Prime Minister Rudd knocked me for a 6 this afternoon.  I was terribly depressed in the morning, basically about the nasty self-obsessed people we had become as a nation with our attitude of no compassion to Asylum Seekers but feeling sorry for the poor people who would lose out from closing the FTB Car rorting loophole...  I bitched we were becoming a selfish country obsessed with First world problems perpetuated by sensation media. Then we had Mr Rudd announcing PNG as the ultimate Stop the Boats solution.

For better or worse, Rudd has just out Abbotted Abbott...#PNGsolution

Since then I have watched people on Twitter.  So many are upset about such an inhumane nasty response from this Government.  Others who are more political are stoked that Rudd snookered Abbott and now looks even better for this election.  Me, I am torn...

I know there are a lot of people on Twitter, in the media, the normal so-called experts, fact is, the world-wide refugee issue is way too big & too complicated for any body to get right & ever changing due to geo-political issues in various parts of the world.  The fact that Australians have been conned into thinking that either Kevin or Tony can “sort it out” to win an election is just bloody offensive.

Like most people with a conscience I feel sick at the amount of people who die coming here by boat.  The fact that so many will just disappear off the face of this earth without a whimper as we don’t know they were there and we will never know their names is too horrifying to contemplate in depth.  So, I hate to admit it, but, this new PNG policy will most likely stop a lot of families taking that punt on a boat.  So part of me, is like, fair call, that will stop a lot of deaths.

Part of me also knows that we already give a lot of aid to PNG, and that giving them more in exchange for helping us with this issue is also not a bad thing.  Extra help with Schools, Hospitals and Policing is seriously needed there.  Again, that is a good thing.

Perversely, the fact that so many asylum seekers are actually educated professional people, nurses, doctors, engineers & more, that may settle in PNG and actually help that country as a developing nation is also probably something that many have not looked at.  This could be a good thing for both the refugee as they will be valued and good for PNG as they need this sort of input, not just the odd expat who comes in with expertise that they are beholden to.  This will be a game changer for the future of PNG.

I also desperately do not want Tony Abbott and his mates who back him to be in control of this country in a few months time.  Therefore the fact that Kevin Rudd, having effectively killed the Carbon Tax mantra of Tony Abbotts has now well & truly FULL Stopped the boats does give me more comfort that Tony’s dream of being Prime Minister could have been kyboshed.

I did spend a month in PNG back in the day.  I do know what it is like and Lenore Taylor probably summed it well in this sentence:

“What exactly do we think refugees are going to do in Papua New Guinea with its unemployment “crisis”, entrenched poverty, high crime levels, high levels of infant mortality, rampant corruption, poor healthcare and tropical diseases.”

I grew up in an area of immigrants; I loved it and appreciate what I learned from them.  I love History, again, I appreciate what we owe to the immigrants before us and know this nation would not be the wealthy, ‘lucky’ country without them.  I look at our Indigenous Australians and thank the fact that in recent years we are coming together as one.  BUT most importantly, I am a mother.  If I lived as many Asylum Seekers do, I would move heaven and earth to get my family on that boat.  So many just do not comprehend the lengths a person will go to for a better life for their family and as nice as many in Papua New Guinea are, that is not a better life for them.

BUT having said all those commonsense, practical things, my heart just sinks, I want to cry for those families that just want a better life, want freedom, want their kids to grow up with a good education.  Have you ever met an immigrant who will have the thickest accent still but be so proud of their grandkid representing an Australian team?  I have, it makes you smile & feel proud at the same time.  This policy is stopping that happening.

I also know that once after being punted to PNG it is a short skip to them getting in smaller boats to hit the Torres Strait Islands & North Queensland.  Hell, PNG locals will probably flog the dinghy’s to them at profit...


Its only a short dinghy ride from PNG to Sabai Island (Torres Straits).. So the next Asylum seeker slogan will prob be "Stop the dinghy's"

I know there could have been a more humane, caring, solution available if cheap politics were not involved.  At this moment I despise John Howard and the fact that his Government used Asylum Seekers as a tactic to scare the population.  I despise Peter Reith and abuse of Tampa situation to win an election.  I despise every single News Producer & Paper Editor that cared more about ratings & click throughs than common human decency by beating Asylum Seekers up to be such an issue.  Most of all, I despise the huge numbers of Australians that brought into Asylum Seekers being at the forefront of our political discourse.

WE are big country, surely we could have thought outside the box, tied up our Indonesian aid to allowing us set up shop there to process Asylum Seekers?  Hell, change the immigration policy where we still give priority for trades we need, BUT Asylum Seekers who can fulfil those trades are at the top of the list before immigrants from other countries that are not war torn?  After processing send refugees to communities in rural & regional areas that need boosting and also will be more likely to accept the help needed at the same time giving the refugees a community to belong to?

These people are not just numbers, not just sensational ratings or advertising clicks, they are people and in my heart and in my gut, this is WRONG!  We are supposed to be the lucky country?  We are supposed to be educated?  Yet being so caught up in our own first world problems this means I know it will be a vote winner, I know it will most likely stop deaths at sea, BUT, I weep with the moral dilemma and my heart aches for those refugee families.  I am seriously torn...

Then again, what do I know, I am just an ignorant punter :(
Sadly,
Noely
Update 20 July 2013:  We now have quite a few facts to help make a decision thanks to the wonderful & patient @archiearchive who took the time to compile data in regard to PNG & what has actually been put forward as policy, please, do yourself a favour & read: Another Dangerous Refugee Post