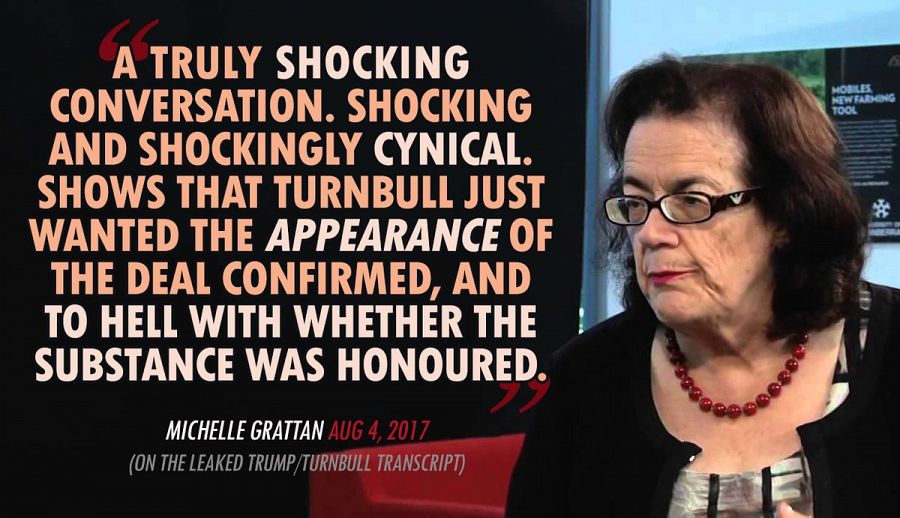 *Quote on Twitter from Michelle Grattan AO, Chief Political Correspondent at The Conversation, one of the most respected political journalists in Australia, who, by no means could ever be considered a card carrying leftie, or as some sneering commentators like to refer to progressives, "Teh Left”.

The leak of that infamous chat between our Prime Minster Turnbull and the newly elected President Trump – at the time – has been the talk of the town and obviously Twitter exploded, which is always fun to watch. If you have not read the transcript in full, I suggest you do. Amidst the frivolity of #Auspol watchers and “Hot Takes” from media, some very serious issues did come to light.

I don’t know about you, but I found myself wondering if many politicians and those in the media had forgotten that punters were on the interwebz too?

The Australian were first out of the blocks with a ridiculous piece from what I assume to be their US correspondent calling it “Trump-Turnbull transcript shows call was one of PM's finest moments”.  Kieran Gilbert on Sky News Australia was referring to the “robust” phone call and using hyperbole like “Turnbulls show of strength”, “Strong Negotiator”, “Standing up to…”, well, you get the gist, the Australian PM had turned into some strong hardman negotiator and we should be proud. From what I could tell on Twitter, ABC News seemed to be following along the same lines.  PM Turnbull is spinning this leaked transcript as “Australians can see I stand up for them”. Poor old Mark Kenny over at Fairfax who has given Malcolm Turnbull more starts than Phar Lap, also follows the ‘tough’ line, though at least has the chagrin to admit to the “PM’s willingness to bend the facts in order to win” with his offering of “Trump leak reveals Malcolm Turnbull to be tough, skilled and indifferent to human suffering”.

Again, we have to ask ourselves:

Hello, do you people realise we are on the internet and can read the transcript for ourselves?”

We saw a discussion between two men focussed on Asylum Seekers who’s only aim was to seek political advantage or limit political damage. The vulnerable refugees? MYEH! Seemed to be the attitude. I’ll let Jen, @noplaceforsheep, describe the aspect of heartlessness on display in her piece "Turnbull & Trump: Masters of depravity" – ignored by so many in our press gallery – and focus on the information those who are not on Social Media for news (of which are many) are getting from our news organisations as this episode is a really good example as to why we, the punters, should take everything we read or hear in the news, particularly those reports based on “sources in Government” etc. with a grain of salt.

So just how are these people spinning the ‘tough Turnbull’ line?

One line. Just one line from Turnbull in the transcript:

In fact, if you read the whole transcript, it is nothing like the ‘Strong Man negotiating a deal’ that many would like to us to believe. Worse, they are being really tricky, picking out bits of the transcript to fit their narrative, which in fact misinforms the public.

Consider this…
Due to the overwhelming majority of pieces in media following the PM’s “I stand up for Australia” line and “Strong PM enforcing Deal” narrative being in the majority of news organisations, without that full transcript being made available by The Washington Post, we, "Joe Blow & Jill Dill" at home, would be given a skewed version of what occurred and be none the wiser about it?

I will give the PM ten points for tenacity and patience. I mean, pretty much two minutes into the conversation Malcolm Turnbull must have been thinking “WTF! Australia relies on the United States for our International security and they are now being run by this asinine, ignorant, egotistical toddler, we are sooo screwed”. So yes, I will give Turnbull a lot of credit for holding his nerve, as surely any warning that our beuracrats in the US could have given him could not truly have prepared him for just how much of a clown the new president was.

Then again, if we are going to be handing out kudos for perservence & patience in the face of a toddler throwing a tantrum, well, the Child Care teachers & parents of Australia deserve medals too.

Basically, PM Turnbull lied to us. In a nutshell we were told – at the time of the original phone call:

Turnbull: “Do you want to talk about Syria and DPRK?”
Trump: “[inaudible] this is crazy.”
Turnbull: Thank you for your commitment. It is very important to us.
Trump: It is important to you and it is embarrassing to me. It is an embarrassment to me, but at least I got you off the hook. So you put me back on the hook.
Turnbull: You can count on me. I will be there again and again.
Trump: I hope so. Okay, thank you Malcolm.
Turnbull: Okay, thank you.
END OF CALL

From the start, Turnbull gives Trump an ‘out’ on honouring our deal with the US – though does illustrate that the deals are ‘connected’ which the PM & Dutton both said were not:

Turnbull: “…Yes, the agreement, which the Vice President just called the Foreign Minister about less than 24 hours ago and said your Administration would be continuing, does not require you to take 2,000 people. It does not require you to take any. It requires, in return, for us to do a number of things for the United States – this is a big deal, I think we should respect deals. “

Reading the whole transcript, I really can’t see where Trump really does agree to take our refugees as per the original agreement, though, I do see where Turnbull pretty much coaches Trump as to how he can save face by agreeing to the deal but not actually honouring it by using the ‘vetting’ excuse as a get out of jail free card (Trumps political face that is, now our refugees getting out of jail SIGH). Turnbull then reinforces this suggestion as to how to weasel out of the 'deal':

WTF! He is basically telling old mate Donald, as long you look like you are honouring the deal, we don’t care, just go through the motions ARGH!

The conversation continues where Turnbull has to explain that the refugees are not actually criminals, though, to be fair to the Don, his limited knowledge of how we had them in detention on islands would lead you to believe they are, as that is the way we are treating our Asylum Seekers, Trump finally catches on to the loophole & takes the ‘out’ that Turnbull had already suggest to him:

Trump: “…I look like a dope. The only way that I can do this is to say that my predecessor made a deal and I have no option then to honor the deal. I hate having to do it, but I am still going to vet them very closely. Suppose I vet them closely and I do not take any?”
Turnbull: “That is the point I have been trying to make.”

So Turnbull reinforces that Trump can get OUT OF THE DEAL?! Making a lie that the deal was in fact done, not even pretending it will be honoured. So pretty much, the PM lied to the Australian people about the deal being honoured?

Let’s get back to the People Swap that we were told was not a People Swap, patently a lie if you look at Turnbull’s words above, we even gave Trump a way to weasel out there…

Turnbull: “…Basically, we are taking people from the previous administration that they were very keen on getting out of the United States. We will take more. We will take anyone that you want us to take.”

WTF! How is this a deal, Turnbull is promising to take whatever the Don wants to send us –  as long as they didn’t arrive on a boat of course.

So to summarise, our so-called “Strong Prime Minister standing up for Australia”, negotiated a stunning deal where the other party can weasel out of their side of the deal, as long as they look like they tried and we will take an unlimited amount of US unwanted, whoever they may be?
Yeah, great deal? NOT!

No wonder our Prime Minister can’t get anything done as a Leader in this nation, he sure as hell can’t negotiate for shit?

For mine, the ‘hot take’ from this transcript is that our Prime Minister is the ultimate political animal, happy to obfuscate with the Australian public to look good – some would go so far as to say “lie”, who doesn’t care less about real people, as long as he ‘politically’ looks good. Or as my grandmother would have said, “Style over Substance”.  YET, if we did not have this transcript to read for ourselves, would we be seeing this?

This whole episode has been a masterclass on how media can report truthfully, yet misinform or mislead at the same time.

These ‘Turnbull is a legend’ types have not lied, they are using quotes from the transcript, just omitting any that make Turnbull look soft or don’t fit their ‘take’.

It really makes me wonder just how often we are misinformed? I mean, you know in your guts sometimes that what we are hearing does not feel right? We are missing something? But apart from opinion pieces, which let’s face it, if written by particular people – you all know who they are – you don’t even bother read as you know it will be full of shit, you do tend to believe reports as even the most bias media still seem to follow that basic precept of journalism where the story needs to be based on fact or a truth that is known?

Sadly, my ‘hot take’ from this Trump Turnbull chat is we can’t trust vast segments of the media to inform us fully and frankly and to be totally honest, I find that really depressing, I'm not the sort to squeal "MSM" as a perjorative & see bias around every corner. I do understand there can be some, unconscious bias in the media, BUT overwhelmingly choose to believe they do take their role as the fourth estate seriously.  I want to trust the majority of our fourth estate.

Maybe this transcript has given us the opportunity to ascertain exactly "who" in our media can be trusted?

We have seen that very few have reported this transcript straight down the line. I would strongly suggest to all punters out there, you ensure you subscribe to those segments of media who did report this issue seriously and factually, as we are stuffed if they fold.  ☹
Cheers,
Noely
* The graphic I have used above has floated all over Twitter but I don’t know who actually created it? If you do know, please advise me so that I can actually credit the individual responsible for it’s creation.