Looks like the PM is using review to have taxpayers pay for 'party business' see TERMS OF REFERENCE linked below...

Bishop has finally stepped down as Speaker, but don’t get too excited.

Should MP's be allowed to claim 'Party Business' in Entitlements

It was left up to her good mate the Prime Minister to give us all the joyous news. He just relayed the conversation that Ms Bishop phoned him, to let him know, she had resigned the position of Speaker to the Governor-General, then he went on to tell us:

"Bronwyn Bishop has done the right thing by the parliament, by the government and by the people of Australia"

Oh we laughed...  We always knew she was going to have to resign, just when.

Then we stopped laughing as Prime Minister Abbott continued to tell us that he would be kicking off a review into entitlements led by former head of the Department of Finance, David Tune, and the head of the Remuneration Tribunal, John Conde. Seriously?

Pretty sure us punters were wanting to know the result of the Finance Investigation into Ms Bishops ‘multiple’ expense claims? As most who pay attention know, the Chopper jaunt is not her only non ‘official’ business travel at our expense, she has been pinged for multiple outings and most punters are not buying ‘secret committee business’ for any of them. Just because Bishop has resigned her cushy Speaker gig does not mean this is over. We want to know if she ‘lied’ on her expense forms, claiming ‘official’ business when it is not and of course, just like Slipper, we want her charged for all counts of misuse.

Instead all we got from PM Abbott was:

Well um ok, we can see where this is going, Mr Abbott, after finally dealing with this expenses scandal has decided that the “Look over there...” approach will be a review and that way when he is fronting pressers he can stand solemnly and spout some bullshit about how, “Those questions are for Ms Bishop, now MY Government is ensuring that this confusion can not happen in the future with...” Sad thing is, he will probably get away with it, as he normally does. We will never see the luxury loving Ms Bishop charged with anything and considering 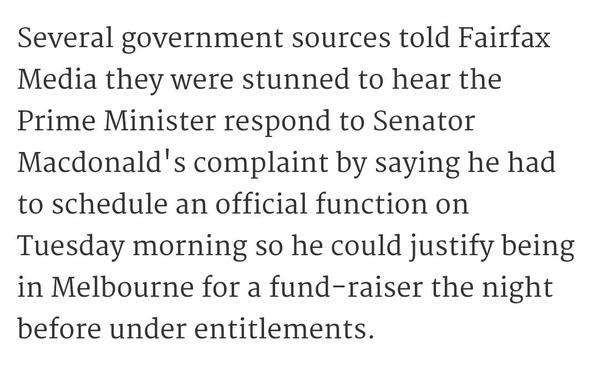 she has been on our payroll since 1987 there is a good chance the Geelong Chopper, Mirabella’s wedding, the 15 hearing trips (we assume were also secret business), Nowra charter - Hell, think there are a few more weddings tossed in the tally as well, I have lost count over the last 3 weeks – could be just the tip of the iceberg for Bishop.

What has become apparent Mr Abbott... Is that some MP’s can’t distinguish Party & Personal Business from Government business. Even if the rules are convoluted, even Ms Bishop with all her years of experience knew that she had to do a 10 min pop into a hospital or kindy to make her bullshit party fundraiser claim legit “within the guidelines”.

Anyhow, yes, not acknowledging that Bishop has stuffed up and it is the systems fault ‘live’ really peeved me, though was happy to see it peeved others too, Laura Tingle, Michael Gordon & Lenore Taylor were straight out of the blocks last night calling BS on ‘the system is at fault’ excuse and this heartened me to a degree.
Then I went to bed, but I was still seething, see, I’m one of those daggy punters who actually reads what is released by Government, yes, I know, I need to get a life. One line in particular in the ‘Terms of Reference’ for the PM’s “An Independent Parliamentary Entitlements System” stood out like a German Shepherds crab apples.

“Acknowledging the role of party business in parliamentary business”

Seriously!? My reading of including that in the “Purpose” of the committee is that Mr Abbott is not only going to let Ms Bishop get away with ripping off the taxpayer by allowing her to resign and keep her job, BUT is in fact doubling down on the insult to us by trying to make ‘Party Business’ a legit expense in MP entitlements?

Pollies love to use the term “Community Expectations”. Well I can tell Mr Abbott now;

The Community never expects to pay for Pollies to attend their own parties business, fundraisers, strategy meetings etc. NEVER EVER!

Considering political parties are not even mentioned in our Constitution, over the years various rules have been changed in Government to give political parties an advantage that a sole MP does not get. This grates enough as MP’s are elected to represent their ‘electorates’, not be “warriors for their political parties”.

“There are more people on the waiting list to join the Melbourne Cricket Club than there are rank-and-file members in all Australian political parties put together.” (Cathy Alexander, 18th July 2013)

I’m not sure how accurate those figures are in the piece I linked above as it is hard to find real figures but even Peter Brent at the Australian in  June 2011 could cite Liberal National membership as 80,000 in 2002. Considering Australia has a population of over 23 million people, you do the maths, it clearly illustrates, regardless which Political Party membership figures are used, that we punters pretty much do not give much credence to Political Parties as only a miniscule percentage of the population actually bothers joining them.

Hence, for the PM to think that we punters - who quite patently do not give a shit about political parties – will be sweet with him including ‘party’ business as part of MP’s entitlements, then he has another ‘thing’ coming. By all means, you all swan around the country attending sucking up to the faithful BUT do it on your time and at your parties expense, not that of the Australian taxpayer!

The PM is correct, "We do need a system that supports the work and activities of current day politicians, from diverse electorates, and helps them serve their constituencies, parties and the Parliament."

NOT the Parties. MP's are on OUR payroll, they want to do party business, do it the party’s dollar, not ours!

Cheers,
Noely
PS. I will be emailing every single MP & Senator the results of the #NoPartyBusiness pub poll above, so if you could please share the pub poll in any social media forums you frequent, that would be appreciated, as obviously the more votes we have there the more seriously it should be taken by our elected reps I will be emailing :)

So @TonyAbbottMHR thinks we should foot the bill for pollies to attend party fundraisers. @theweeklytv disagrees http://t.co/uZESEQNLpA


This below from Paula is important to note "Travel to Political Party Conference" and quite frankly in my opinion is enough as already favour big parties over Independents.

It has taken quite a few days, yet finally there is a report in the media about 'party business' being inserted into the review:
Terry Sweetman: MP expense claims should relate only to their parliamentary duty, not party affairs - The Sunday Mail, Sunday 09 August 2015

IMPORTANT: This is a very good idea by Craig Thomler (@craigthomler) and it would be great if you could support it "Include ordinary citizens on the MP entitlements review panel"  as there are some very good people on the Review panel, though, they are still people from Government or Business who have had very high wages and extremely generous entitlements themselves so input from 'ordinary citizens' really is needed to ensure "Community Expectations" are not only considered but met.