No wonder those outside of Queensland look at us in #QldVotes and say WTF?! 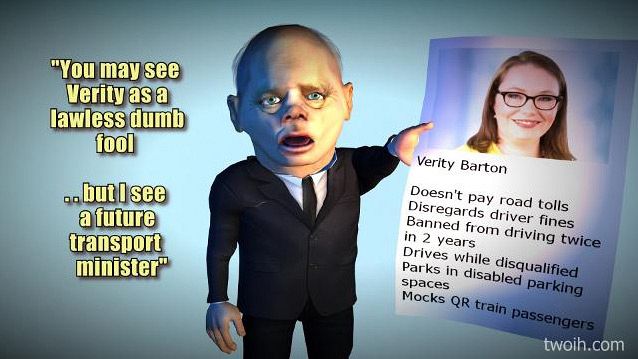 The #ImWithStupid drama typifies how ludicrous #QldVotes is. The fact that a bloke basically having a bit of fun and taking the piss out of some uptight young LNP campaigners can result in 3 Police Cars and a Paddy Wagon rocking up with no less than 10 cops to arrest and drag @Can_do_Campbell to the Watch house to be charged with public nuisance is considered acceptable Police practice and use of taxpayer funded resources.

YET on the flipside, as Rob’s @TwoEyeHead graphic above illustrates, A standing LNP MP can be ‘proven’ to have acted unlawfully and that is sweet? Verity Barton says “Sorry”, no ramifications, no stripping of her position, hell, not even asked by the LNP executive to stand down as a Candidate re-contesting her seat of Broadwater on the Gold Coast, just business as usual in Queensland Politics :(

No wonder those outside of this state look at us in #QldVotes and say WTF?!

I’m puzzled. Now, I’ll admit making me puzzled is not that difficult these days. The kids do it to me regularly. My doctors manage it every now and then. Politicians puzzle me every waking hour.

Mr Newman or Mr Campbell or whatever your name is, chill out mate.

Look, I agree it is not exactly what I’d call a great song. Frankly, I’d go so far as to say the Queensland Police might have been better arresting the Pet Shop Boys.

The man wore a t-shirt. Nice and clean it looked too, so he wasn’t causing a health hazard. Bright white, in a sea of blue. Almost looked liked a cloud in the sky, don’t you think? Rather pretty really, if you like that sort of thing. Perhaps some of the blue tribe felt xenophobic about white t-shirts.

I decided to do a bit of research. Surely just wearing a t-shirt with song lyrics on it couldn’t get one arrested in this land of “we all have the right to be bigots“. Why wasn’t Tim Wilson defending the arrested man’s right to freedom of speech or something? You do see why I was puzzled, don’t you? People say one thing, then do something completely different.

I found an article where it is alleged the arrested man CROSSED THE ROAD! What came first….. oh, never mind. You see, the political tribes in Queensland have particular street corners. Must be a bit like the days of “The Clan of the Cave Bear” I suppose.

What I was interested in was did the alleged criminal actually DO anything other than cross the street and stand in the other tribe’s territory? Well, that’s a bit clouded too. Some say he was aggressive, others say he wasn’t.

Then I got REALLY confused.

You see, when Twitter flew into a storm the Queensland Chief of Police entered the fray with:

We take appropriate action if individuals break the law. Court decides the lawfulness & consequences. Our focus- keep u safe. @PaulTully

Now, I’m no eagle of the legal convocation, but if the courts decide “lawfulness”, surely the law breaking hasn’t been determined at the time of the arrest? Admittedly, CoP Stewart was constrained by that pesky 140 character limit. Been there myself. So I’ll give him a break. Just puzzling.

I checked another news report. Here it is claimed he did nothing more than heckled. Heckled? Isn’t that a bit like sledging? Didn’t our leader of the blue tribe say sledging was a skill to be admired? Technically different targets, have sledging and heckling, but really….all much of a muchness if you ask me.

I am trying to encourage four teenagers to participate in the political process. To engage in the democratic process. These teenagers are from a country where such participation can get a person killed. How, exactly, do I explain to them that in THIS country a person can be arrested for wearing a t-shirt? What sort of message is that sending to young people? What is happening to our democracy?

What am I puzzled about? I’m puzzled about how this country got to the point it sends three cars, a paddy wagon and a dozen or so police to arrest a man in a t-shirt. I don’t like what I am seeing and hearing. Will, as John Lord asks, 2015 be the end of Australian Democracy?

PS: Just a thought, but isn’t “I’m with stupid” a tad less insulting than “Ditch the Witch”?