Mum, Dad, Are we there yet? 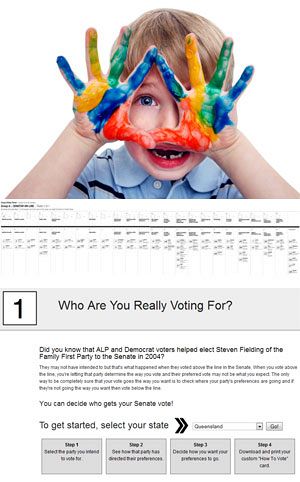 Is anyone else sick of all the election ads? Don't you love the scary ads... They can tell you that a particular party all really have horns & worship aliens and get away with having it aired on TV? Not quite sure how that works, you are not allowed to do that as a business? The same on Google, if you are business you can't buy another business name for Adwords, but for some reason it was allowed for a political party to purchase the names of opposing candidates, that was seriously dodgy, seem to be gone now, obviously Google was given a heads up on that one!

With all the rubbish that is spouted, unless you are going to seriously study what each candidate and party says, it is really hard to make an informed decision. AND, even if you do take the time to study what your candidate has said, who knows if their party will follow through? At least when it comes to local candidates there are normally not more than 5 choices, so that makes it a tad easier, but the Senate, man that is a scary scary form, you could use that as a little kids paint table it is sooooo big! Maybe that is how they recycle the unused forms, donate them to kindy's?

Now that we are at the pointy end of the Election games you get the dreaded 'preferences' trepidation. "A vote for .... Is really a vote for ..." That is so much rubbish! With the Lower House, just number them in the order YOU want, just because a dozen people hand pretty pamphlets to you as you rock into the voting grounds doesn't mean you have to blindly follow them. Vote in the order you want.

Obviously with the Senate that is hard! Hell, most people don't even know what the Senate does, let alone how to vote correctly, and the easy way out is the most common option, ie. the ONE (1) above the line. This is where preferences really do matter. What is sad though, is that the major parties seem to like to keep you in the dark about this one?

On some of their websites if you search really hard you can find what they do with their preferences here, except for the Greens, I have to give it to them, at least they do try to educate and are very upfront with their preferences on "You determine where your preferences go". This link on their article is very helpful "Who are you really voting for?", you can even make your own 'cheat sheet' on the Below The Line site, which is pretty cool, and gives you a lot of satisfaction to put a particular person last, if you are so inclined (as myself and about 60,000 other Australians are). Makes it a lot easier to work out if you don't want to muck around on the on the AEC site under what they call "Group Voting Tickets (Senate preference flows) for Queensland (Qld) Tickets", great info, just really hard work! It really doesn't matter how much argy bargy there is in the lower house between Julia & Tony on a particular policy, it is the Senate that decide if it can go through, and the average person has no idea, so that voting on the massive paper is actually more important than you think?

Actually being a fan of the Internet, and of course supporting 'choice', I have to admit I think the concept "Senator Online" is pretty cool. Scott Reading wants to put the Bill information online and have everyone vote for free there as to whether they agree or not? Nice to see someone trying to use the internet for democratic purposes...

On a lighter note, If you want a bit of fun and your fed up with some of the dodgy Ads, I thoroughly recommend the Gruen Nation on ABC, it has been great seeing those guys pull apart the electoral ads and explain what pollies are trying to do with them (scare you, look strong, confuse the issue etc.), if you can catch it this week you should, I am sure there are an awful lot of Political Advisors grinding their teeth over political advertising secrets being exposed.

It is now almost over, so hopefully the lines are not too long for you on Saturday, and you don't get bombarded too much with the well-meaning volunteers handing out leaflets, don't you sometimes feel like having a 'No Junk Mail' sticker on your forehead as you run that obstacle course on your way to the booth LOL! Best of luck, and hopefully you get the 'opportunity' to make an 'informed' choice :)