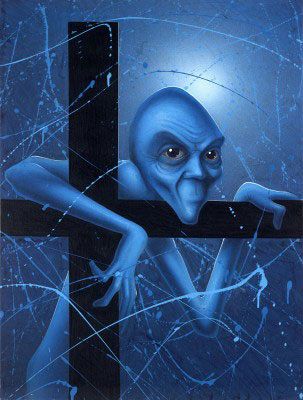 Ms Gillard, Why placate the Religious? They won't vote for you!

What started as a good idea to amalgamate and simplify an awful lot of Anti-Discrimination has now turned into a farce.  Unfortunately a lot of people who don’t have friends or family in the LGBT community may be unaware of just how wrong the Institutionalised discrimination that will be allowed for Religious groups will be for the population in general in exemptions they will be allowed in the new Human Rights and Anti-Discrimination Bill.  It is imperative that ALL Australians be fully informed of the ramifications of this bill and more importantly, the 'exemptions'.  It is just offensive on so many levels!

Don’t get me wrong, I am stoked that the various Gay groups are fighting this.  What is concerning me is that often when it is reported it we have titles like “Anti-gay rights to stay” (very good article by the way).  The media focussing on the fact that Gays will be discriminated against, means that much of the public (like my mother & others) automatically think it is a ‘Gay’ issue and therefore do not participate in any discussion or outrage in regard to this Bill.  A perfect example is a friend of mine, when I mentioned it to her, she was aware, but her comment was “Well the Gays have some pretty powerful groups, they will try to stop it”...  Translated to, “not my problem”.  When I tell her, that as a single mother and a nurse, she can be summarily sacked from a Nursing Home if it has religious affiliations she was a bit more interested.  Taking into account that her chosen area of nursing is Palliative Care and the Church groups almost have a monopoly on this area of the health sector, all of a sudden the Bill is a serious concern for her that she was not really aware of.

We have already seen this in the past, A Teacher being sacked over her pregnancy last year on the Sunshine Coast is a very sad example.  The poor woman was a well-liked teacher and worse, a member of the religious community, unfortunately she broke the “lifestyle agreement” part of her contact by having a child out of wedlock.   People need to be aware that this new Bill will not only affect the LGBT community, it will also affect any atheist, single mother (so far have not found any issues with single fathers, hypocritical much?), basically anyone who will not subscribe to the narrow-minded view that a particular faith-based organisation may have.

Don’t get me wrong, I have no problem with exemptions for ‘Religious Roles’ as it would be ludicrous to expect the churches to agree to employ someone outside of their religion in a role that is of a religious nature, but that should be theonly exemption, one that would not really affect the population in general as obviously who the hell would want to be a priest or nun if they were not fully signed up with the faith?

Considering the amount of Religious based schools, hospitals, nursing homes & aged care, and the massive increase in Government out-sourcing of Community Services to these groups which started under the Howard Government, this is a seriously large sector of employment in this country which will have the right to bar employment for a huge percentage of the population.  Considering the Government has now put single mothers on Newstart to encourage them to get a job just adds insult to injury, as they will allow this group to not employ those mothers.  That is a massive employment pool which will be closed to 1000’s of people.  The fact that taxpayers are funding these faith-based organisations to actively discriminate against ‘certain’ taxpayers is just wrong and obviously a whole other issue which this nation seriously needs to have a discussion about, though in relation to this bill, just makes the kick in the guts to the people who will be hurt by it even more offensive.

What peeves me even more is that the Gillard Government does not need to do this.  They do not need to pander to the powerful Australian Christian Lobby who have worked so hard to keep their so-called ‘religious freedom’, the fact is, that the people who subscribe to this group and it’s ethos, will not vote for Julia Gillard and her party anyhow?  Unfortunately my husband’s family are of the Harry Potter book burning style of Christians, they will never ever vote for the ALP while Gillard is PM, not because they don't like her policies, just because she is an Athiest living in sin, yep, only reason...  I am not anti-religious, there are decent Christians out there who are truly espousing the christian way of life that I am sure was supposed to be Jesus's legacy (yes, I am a lapsed Catholic), and they will make a voting decision based on policy not faith, it is only the seriously narrow-minded and in many cases I would go so far to say bigoted 'christians' that will never ever vote for our 'godless' PM, so why the hell is the Prime Minister allowing these ‘stakeholders’ to dictate a policy which is just wrong in a modern society?

I am sorry Ms Gillard but you are not going to win any votes with this and worse, you are hurting a much larger ‘stakeholder’ group, that being the decent, tolerant citizens of this country who seem to be more ‘Christian’ in the true sense of the word (caring & accepting of all) than the actual ‘Christian’ lobby groups you have allowed to bully you. The Australian Labor Party are supposed to be the advocate for the 'battler', are not the LGBT Community that is persecuted, the Struggling Single Mothers, and the Socially disadvantaged who will be hurt by your new bill the 'battlers' you are supposed to be protecting?

Again, I am just a punter living out there in the masses , not in Canberra so what the hell would I know?
cheers,
Noely @YaThinkN

Stunning - Tasmania has not allowed Religious Institutions to discriminate for quite a while, AND, even the UK enforces that if Tax Payer money is used that the organisation must follow secular law, so it can't be hard to change here too? Exemptions for religious groups keep fears alive - Brian Greig, January 22, 2013 - 7:50AM, National Times

20 Jan 2012 - Excellent piece on how religion is actually becoming more irrlevant in our society so should not have the standing it does with Govt: "The Future of the Christian faith in Australia"

19 Jan 2012 - Excellent Tweet, the cartoon this person tweeted is gold and perfectly illustrates the Hypocrisy, unfortunately I can't find the page on the Sydney Morning Herald site so the tweet itself is below:
cathy wilcox ‏@cathywilcox1
oh, and yesterday's SMH editorial cartoon. I'm a bit slow.pic.twitter.com/delDDuFO