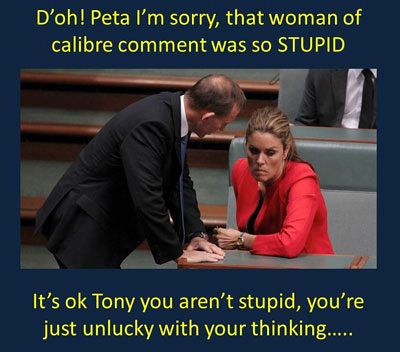 Unfortunately I am not sure who actually put this funny meme together, though please if you do know, let me know so that I can correctly credit them for their creativity :) Exposing Tony Abbott & The LNP - Memes & Stuff found via @khtagh & @Margy011 ::: "But I am trying to get you your 6 months PPL on full salary - do you forgive me?" is an alternative caption suggested by @sallie6youtube

Ok, I was not going to go here, all manner of Feminists, accredited & self-proclaimed have had a say.  Some I agree with, some I think are getting hung up in exactly what many of us on Twitter are always complaining about, that is, focussing on a ‘gotcha’ instead of the actual merits of a policy.

I would love to be like some who try to be ‘above’ it all like so-called ‘Legendary feminist Eva Cox’ (Mia Freedman’s words), though unfortunately, as Ms Cox has defended Tony Abbott on a number of occasions, her defence of Mr Abbott with "what Tony Abbott was trying to say in a somewhat clumsy way..." really does not hold a hell of a lot of weight with me.  Ms Freedman chose a rather provocative title for piece, when she came out to bat for Mr Abbott,  "I'm defending Tony Abbott. Let's go.", again translating what Mr Abbott ‘meant’ for us poor dumb punters as "He was simply making the point – albeit a little clunkily".  Yet other articles have used various excuses for Mr Abbott such as “off-the-cuff”, “un-intended” etc., even Paul Kelly on Sky a few weeks ago had to always interject with "So I think what you are saying..." the fact is, they are probably right, he really probably did not mean for it to come across as it did.

Tony Abbott would be an absolute moron to offend such a large proportion of the population intentionally, so to a certain degree I am sure that the example he used as to why this policy,The Coalition’s Paid Parental Leave scheme, is so important was basically just a brain fart on his behalf.  Before I go further down the Mr Abbott’s all-time Bloopers road, let's do as I mentioned earlier, be above the petty gotcha's and look at THE PPL policy.  Personally, not very pretty...

Now, considering Liberals are best mates of big business, as they would say, it is in their DNA, it seems pretty stupid to be annoying them telling them they are being smacked with a Levy (note the Libs are allowed to use the word ‘levy’ unlike the ALP or Greens Levy’s which are always ‘taxes’, no matter what they are named) and told they have to fund this super duper ‘ladies’ special for him?  The “Australian Industry Group” has already publicly let everyone know they are not happy campers.

You then add in the fact that for the first time in forever there is dissent in the ranks.  Now the Liberals for the past few years they have been tighter than ... (fill in the blanks) and we now have 3 MP’s and counting, and there are more muttering, who are not happy little vegemites going against what they call “sound Liberal policy”.  So close to an election, that is not a good look.

Now I am not sure why Mr Abbott is staunchly defending his policy?  There does not seem to be any good reason as basically we have a Maternity Leave policy in place that is adequate and most women I know are more interested in actually wanting to make sure they actually have a job to go back to AND being able to have affordable & accessible child-care for when they do 'hopefully' go back to the same job they had worked hard to get into.  So to put so many offside when the only ones that will really benefit are a few highly paid female excecutives, (because of course I know there are millions of them - NOT) just seems pretty dumb.

For people who keep saying, business is paying for it, not taxpayers, you are delusional.  There is no way in hell a Liberal Government is going to put a tax on their best mates, the 3000 big earning companies in this country without them getting a concession at a later date in some way shape or form.  If they don’t publicly fight this policy then you know that the nudge nudge wink wink deal has already been done.  When big companies get any sort of business concession that means less revenue for the Government and we fill in the short-fall, the taxpayer.  Not to mention they will also double dip (as banks tend to do) and pass on the so-called extra levy to the consumer of their products.  So in fact, you, the taxpayer will probably pay for Mr Abbotts gilt edged PPL twice...

Chatting over a glass of wine, all we can come up with is that Margie obviously suffered when she had to leave her job to have Tony’s daughters and he has promised her that his “expensively educated daughters of calibre” will never have to suffer the deprivations she did?  Who would know?

What I do know, is that a perverse part of me actually wants him to stand his ground on this one, just for the sheer pleasure of seeing the IPA storm troopers throw tanties about it.  They have already stated they don’t like it.  I would go so far as to say they are actually pretty pissed off about Mr Abbott not toeing the line on their 'advice'.  So, part of me just really wants to see if Tony does have the guts to stand up to them?  Seriously, I would pay tickets to that show!

Anyhow, back to my original point, Mr ER UM AH ‘slip of the tongue’ Abbott...  This is where I feel our most serious problem is.

This is not the first time he has been struck by foot in mouth disease.  Fortunately for Mr Abbott he has a forgiving media that will explain away any gaffe of his with pleasure, combined with a public that in general is more interested in who got voted off the Voice last night (don’t even ask who got booted last year, that is long forgotten), so he gets away with these sorts of miss-spoken statements all the time.  Though of course, should you wish to revisit the classics, please visit the well compiled "Tony Abbott gaffes" for a trip down memory lane. 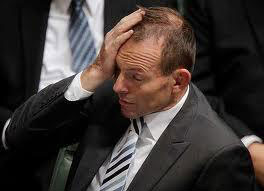 My point is, IF Mr Abbott is to become our next Prime Minister as the Australian Media keep telling me he is – Thanks for that, though if you don’t mind I would like the courtesy of actually voting first, along with the odd 23 million Australians – then how the hell is he going to cope when every conversation he has with a foreign power, drama overseas, terrorist situation etc., which is NOT scripted.  These very serious situations will happen.  Look at the last 12 months alone, Prime Minister Gillard has had to negotiate with India, China and our conservative states on NDIS & Gonski.  Now we do not know what the future holds, who Mr Abbott may have to negotiate with?  Even the easier stuff like the states may not be his conservatives mates in the future.  The fact is he will not be able to have staff doing this for him, they can only prepare so much, he will not have the likes of Peta Credlin at his side 24/7 to make sure he doesn’t ‘miss-speak’ he will have to stand on his own two feet.  I find that pretty scary, as at the moment the bloke shies away from a true challenging, live, interview?

Let’s face it.  Mr Abbott may be very good at saying NO, or a 3 words slogans, but actually answering questions or interacting as a human in a real life situation UNSCRIPTED, the man is pretty much an epic fail.  AND maybe that is what we should be talking about?

Cheers,
Noely @YaThinkN
09 May 2013 - Only 'women' mentioned in "The Coalition's Policy to Improve the Fair Work Laws" what about same sex couples who adopt or have a surrogate child?

If you would like to look at the D'oh! Peta graphic in a larger format it can be found: Exposing Tony Abbott & The LNP - Memes & Stuff

PS: If the Coalition & Mr Abbott's personal fan club, News Ltd are putting up pieces like "What about men of a high calibre Tony?", pretty sure Tony has a bit of 'thinking' to do :)
PSS: Thanks to Sheila NomNomDePlume ‏@stinginthetail for editing.  Often people talk about Twitter as outrage only, but it is actually also for questioning and you often meet some really wonderful people who are very talented & will ofer to help you for absolutely no reason except that they are nice and willing to share their skills.  That is a good thing & thank you :)